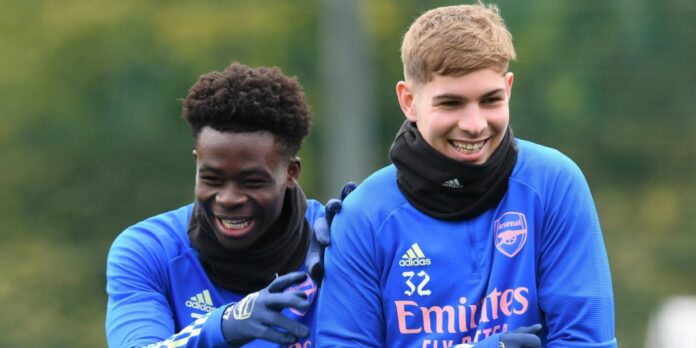 Arsenal have confirmed that Bukayo Saka and Emile Smith Rowe are both available for tomorrow’s Europa League quarter-final second leg with Slavia Prague.

Saka went down injured in the latter stages of Sunday’s 3-0 win over Sheffield United and had a massive ice pack applied to his thigh when he was subbed off for Willian. Initially, there were concerns he’d suffered a muscular problem but it’s believed to be little more than a dead leg.

Smith Rowe, who missed the trip to Yorkshire due to a sprained ankle, is also back in full training and will travel with the squad this afternoon.

Things are less clear cut with Martin Odegaard and Pierre-Emerick Aubameyang. The Norwegian continues to feel discomfort in his ankle – an injury first picked up on international duty – while our captain has yet to recover fully from illness. Knee injuries will keep David Luiz and Kieran Tierney sidelined for several more weeks.

The Gunners travel to the Czech capital knowing we must score to progress. We can go through without winning but the thought of us relying on a high-scoring draw to progress on away goals is enough to bring us out in hives.

Excellent news regarding Saka and ESR! They’ll be vital if we’re to have any sort of fluent attacking display tomorrow.
Would like to see Pepe chucked in there as well. Laca, Saka, ESR, Pepe with Partey and Xhaka pulling the strings from the middle and Slavia Prague won’t know what hit ’em!
COYG

Daveo
Reply to  A Voice in the Noise

I prefer Martinelli to Pepe in this one. Hard to play Auba and Pepe together and have enough ball retention.
I’d go with:
Leno
Bellerin-Holding-Gabriel-Soares
Partey-Xhaka
Saka-ESR-Martinelli
Auba

Alternatively you could stick Saka at LB and give us Tierney style options:
Leno
Bellerin-Holding-Gabriel-Saka
Partey-Xhaka
Pepe-ESR-Martinelli
Laca

The latter may be worth a punt.

I think the manager will go with the latter and assign floating roles to both Saka and Xhaka to avoid any spaces at left wing. I would not be surprised to see Willian instead of Martinelli, we will see Martinelli after 60th or in 2nd half sometime.

I wouldn’t be suprised to see Willian either, I wouldn’t not be pissed about it too!

He will not play Martinelli unless we are 2-0 down in the second half.

Baichung Bhutia
Reply to  A Voice in the Noise

We definitely need Saka and ESR. I just hope they are fully fit. Agree with your line up if everyone is fully fit.

Huge news. Hopefully a front four of laca, gabby, ESR and Saka then.

would love to see martinelli in lw but arteta does not prefer him when everyone’s back.

I just get a funny feeling this is a game Auba get’s goals. He (hopefully) has a chip on his shoulder. It’s a tough call finding the right balance. You need Saka and ESR to play Auba up top, and Gabby’s wing play and running I feel is the right choice to cause Prague problems. Laca had a good game last out, but he (like most others in this team) has been blowing hot and cold (he was rubbish in the 1st leg). They look a bit susceptible on the break and hopefully with ESR, Xhaka, Partey, Saka there is… Read more »

What a lovely pic 🙂
..and great news!

A proud uncle on Facebook… that’s exactly how these two make me feel, too! 🙂

Look at the bags under Auba’s eyes in the pics on the dot com. He looks ill. Either that, or he’s been spending nights up reading all the hate coming his way.

If Willian starts we riot

No I will not unless we win anyway 😀

Salvia Prague are an average, mid-table Championship side. There’s no way that they should be beating us over two legs. Hopefully, we’ll go over there and be professional: if we do then we’ll get through easily.

Yes, but unfortunately, our season has been littered with poor results against teams that we should have beaten on paper. The fact we’re on a relative knife-edge after the first leg is surely testament to that. It would be useful in the context of this debate to check the posts prior to the first leg and see the number of Gooners that thought we’d get through that match easily. For what it’s worth I think we will get past Slavia, but the big problem with this Arsenal side is that you never quite know which one – “professional” or less… Read more »

Yes mate it’s a game of two halves you have to shoot to score right!

I saw a preview of the game in you tube and the guy from Prague was extremely confident. That had me worried. I hope we don’t go the cautious route – try to impose ourselves and get the goals.

Thank god. Let’s have a them and martenelli play and get a win at praugue

More good news (after the confirmation of the Balogun contract), but let’s be a little cautious to avoid rushing them back – even though we can certainly do with both of them on Thursday.

Why the hell was Odegaard allowed to play on a trash tier pitch against trash tier opposition?

Another pointless international at the expense of the club’s assets.

Norway (and any other) National Team should be forced to pay for insurance that covers (at minimum) the wages of the player for the time he is out if injured on international duty.

This argument has been going on as long as I can remember. A couple of things to keep in mind: most players want–desperately want, usually–to play for their national teams in every meaningful match, such as a World Cup qualifier. And that has to be considered when we think about the second thing: a national coach cannot sacrifice the chance for qualification by sitting one of his most important players (only Haaland is more important for Norway) because his club team might be harmed. If you try to interfere with those considerations, you risk having a lot of unhappy players… Read more »

We need to attack and not sit back like we did before,if we score goals we’ll go through. They’re a dangerous side and they were respectful of us in the first leg, they won’t be again. This time they have some players back and will think they can get at us, we need to start fast and get the away goals.

But are they fit enough tonight to start together?

All things said and done I don’t see anyone except these two and the Odegaard with the hunger and the enthusiasm to bring home the trophy.

Let’s hope they do start and give us a 2-0 lead in the first half.