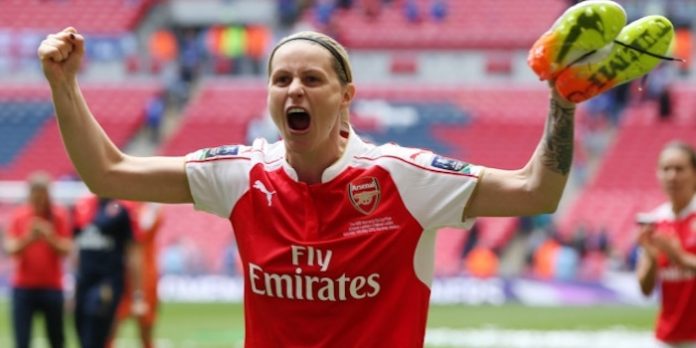 The FA Women’s Super League turns ten today. The first ever game involved England’s dominant women’s team, Arsenal, who travelled to Chelsea at Tooting and Mitcham’s ground on April 13th, 2011. The Gunners ran away with the points on that day thanks to a goal from centre-half Gilly Flaherty, who currently captains West Ham.

To celebrate the anniversary, The FA is launching its first FA Women’s Super League Hall of Fame, which will be sponsored by Barclays, that will look to recognise those individuals who have made a significant impact on the league. An induction event will take place later in the year and an expert panel will create a shortlist of nominees before determining who will be the first inductees.

Kelly Simmons, FA Director of the Women’s Professional Game, said: “I could never have envisaged the league having been on such a journey of growth and development when we launched it ten years ago. The support we have received from clubs, stakeholders, the media and fans has been overwhelming.

“The launch of the Barclays FA WSL Hall of Fame is designed to recognise those who have made a major contribution to the league over the last ten years.” Given that Arsenal have won the WSL title three times and the WSL Continental Tyres Cup five times over that decade, Arsenal can expect to have several inductees, including the likes of Kelly Smith, Kim Little, Jordan Nobbs, Laura Harvey and Vivianne Miedema.

As well as winning the opening game and scoring the first goal in the competition, the Gunners helped to create the record attendance when 38,000 fans packed into the Tottenham Hotspur Stadium to watch Arsenal beat Sp*rs 2-0 in November 2019. On a media call on Monday, Simmons pointed to that North London derby as a touchstone moment in the development of the league.

“The one for me was Tottenham v Arsenal with the record crowd. The crowd was phenomenal but the atmosphere was incredible, you could hear the Arsenal end you could hear the Spurs end. It really created a special atmosphere, spine-tingling really and I was sat in that game and I thought that’s what, over the next 10 years, women’s football can become regularly, we can’t let this be a one off.”

Arsenal have won more WSL games and wins than any other team in that ten-year period, with 165 games and 112 wins, the Gunners are also comfortably the league’s top scorers with 404 goals. Arsenal also average 2.2 points per game away from home, the best in the WSL since its inception.

Arsenal hold the record WSL victory when they beat Bristol City 11-1 at Meadow Park in November 2019, Vivianne Miedema also broke a record for goals in a single WSL match with six that afternoon (she also created four goals in that game). Arsenal are tied with Manchester City for the longest winning run, with 12 consecutive wins- Manchester City will break this record if they win their next match against Chelsea.

The all-time leading scorer in the WSL is Arsenal’s Vivianne Miedema, who has scored an impressive 59 goals in 63 appearances so far. The other player to have scored 50+ goals is England striker Ellen White with 56 and Ellen played for Arsenal until 2013. Jordan Nobbs is fifth in the WSL’s all-time scoring charts with 46 goals.

Miedema also holds the current record for WSL hat-tricks with five (her six goals against Bristol City in November 2019 only counts once). The player with the best win ratio in WSL history – among players with at least 20 appearances – is Arsenal’s Viki Schnaderbeck, with the Austrian winning 18 of her 21 games (85.7%).

Of the top ten assisters in WSL history, seven have played for Arsenal in the WSL era (lead assister Karen Carney played for Arsenal prior to the formation of the league). Those players are Beth Mead (2nd), Jordan Nobbs (joint 3rd), Fara Williams (joint 3rd), Gemma Davison, Ellen White and Vivianne Miedma (joint 5th) and Katie McCabe (10th). Kim Little’s 13 penalty conversions make her the most prolific scorer from the spot in WSL history.

all data is courtesy of Opta.

Faye White should be in there as well.

Agree! Faye falls into my apology for omission category. She deserves consideration.

Why on earth would you induct active players into the HoF? Isn’t it an honour bestowed on those whose achievements stand out after they have left the game? Never an issue that there is one but I wouldn’t say it should be for those still playing.

It does seem a bit weird, Vivianne miedema would definetely make it, but like later, also how mad is it, in 10 years, she’ll only be 34, probably still playing, hopefully with Arsenal, what are those records gonna look like

I mean with the league only being 10 years old it wouldn’t be much of a HoF if you left out active players. Why would Kim Little not qualify, for example? She’s been a top performer for the entire 10-year history of the league. As long as they don’t induct someone who’s only been there for 3-4 years I think it’s the right call.

Arsenal without fear of contradiction have been the most influential club in English women’s football history both before and during WSL so it makes sense that they should have a good shout for inductees. However, I’m with Maul Person and players that have only been in the league for 2 or 3 seasons are too soon to be considered. My shortlist would be something like: Kelly Smith – Possibly England’s only true world class player so far (Lucy Bronze is perhaps number 2!) Rachel Yankee – Reached the pinnacle of the game against the odds and did some great work… Read more »

This a great list and one that I second. Quick heads up. It’s Rachel Yankey not “Yankee”. A big clue is looking at how Thomas Partey is spelt.

Incidentally, the same mistake has been made in sports articles before L😂L.

Yeah thanks. I know how to spell Ray’s name it’s this bloody keyboard and predictive text shite that lets me down at times and once you press the ‘post comment’ button you are stuffed! 🙂
Please Mr Moderator, can we have an edit your own post function like most other forums do?

Cast my vote on BBC but not telling who for!

Incredible Kelly Smith was not even listed but that says more about the people they asked to create the list who probably never even followed women’s football 10 years ago than the quality of the players.