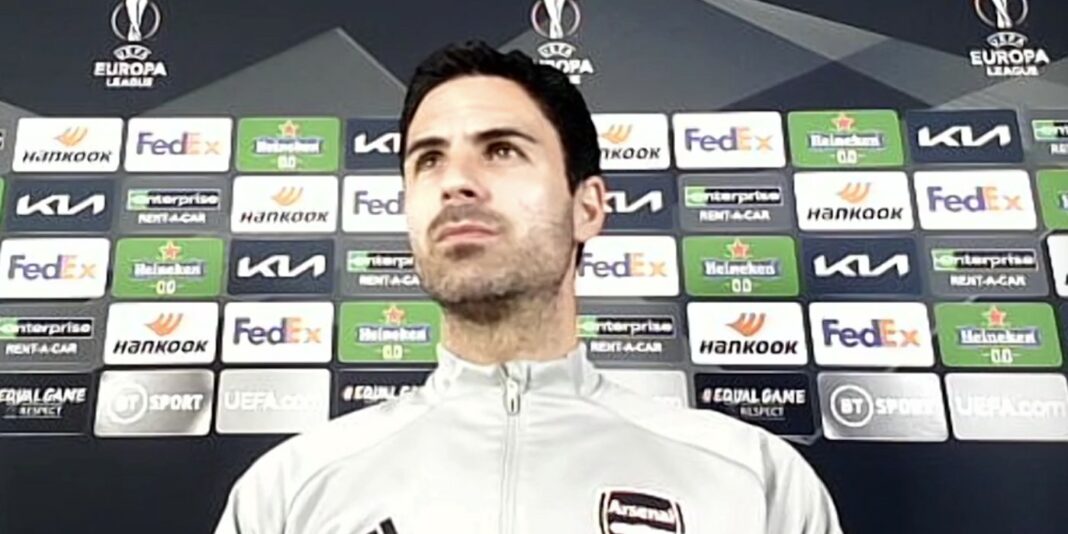 With talk of further fan protests ahead of Thursday’s Europa League semi-final second leg against Villarreal, Mikel Arteta insists that his team cannot use those as an excuse, but admitted if there was a welcome for the players it would be a positive.

Once again backing the supporters’ right to freely express their opinion, the Arsenal boss was hopeful that amid the opposition to KSE there might be an outpouring of support as the team arrives at the Emirates.

It was put to Arteta that some fans are suggesting protests tomorrow should be shelved in case it creates a negative atmosphere, to which he said, “I think they have to be able to express themselves.

“If it is done in a pacific (peaceful) way, they have the right do it. We will try to prepare for the game in the best possible way, and I wouldn’t like to use any excuses if something happened with that.

“I know that the only purpose of the fans is to defend the club because they want the best for the team, and we will try to do the same.”

Arteta was then asked if it would give the players a lift if they were cheered on arrival, and continued, “I think that would be great!

“We’ve been missing them so much and we need them. If the players and the team feel they [fans] are right behind them and supporting them … again it’s the 10th time this club is playing a European semi-final … so it’s a big moment for us, so hopefully we can have them closer to use than we have in the last few months.”

There were no team news or injury updates in the press conference, with further assessment of those potentially involved to made after this morning’s training session.

PODCAST – WHAT THE ‘EK IS GOING ON

Regarding a fan welcome… earn it.

While the players and manager should certainly earn their keep at a club like Arsenal, being a supporter should be about getting behind the team, regardless of whether we think they’re good enough or not.

I’m not saying we can’t criticise when expectations aren’t met (heaven knows I do), but we should at least be able to get behind them on a matchday, especially in a European semi-final.

They’ve earned it by getting to a European semi final.

Not to be considered as a total twat – earn it.

…just leave that to hang like the bad fart it is…

Regarding a fan welcome… earn it.

The biggest L ever on this site!

Supporting a team means always wanting them to win and supporting them in doing so. It doesn’t mean no criticism or always happy clappy, it just means overall you always want your team to win. This is a clear occasion where the team NEED that love and confidence.

This is what the “owners” don’t understand about football! Go back to your cave, man.

In his first full season he has reached only the 10th European semi in the history of the club, with a squad we all know to be A Bit Shit.

That’s true, but your statistic partially illustrates what a relatively weak force Arsenal have been in Europe when you consider we’ve two – now both long defunct – trophies to show for many years of competition. Hopefully, we can rectify this in the EL. If we win it (if) at least it will be an “up to date” European trophy for the cabinet.

Nice trick with the loose usage of “European”. If we had been playing the UEFA Cup Since 1998 we’d certainly have reached many other semifinals?

You could as much say that he was the first Arsenal manager to fail to reach a Europa League semi.

Do what you want within the law, it’s a free country Tomorrow is a massive game though, and a protest seems detrimental to team moral Sunday against West Brom, or Brighton on the last day, seems a much more suitable time to protest, tomorrow everyone should come together, drop any agendas or grievances, and get behind the team, instead of creating a negative atmosphere The last thing we need is to give UEFA a reason to kick an English team out of the tournament, particularly a club that threatened to dump them very recently In spite of a really disappointing… Read more »

This is the problem with 24/7 news If there’s no news, they’ll just create news Sky face an existential threat if clubs bypass the middleman, and broadcast their own product Sky aren’t outraged by anything, they’re panicking Their attempts to place themselves on the side of the fans is farcical i wouldn’t be at all surprised if they’d had meetings where pundits + presenters had been given a narrative, and we’re told in no uncertain terms, not to go off script That script won’t be anything to do with what’s right for fans, that script will be to ensure that… Read more »

The BBC are forced to compete *all the time*.

No coherent left-wing argument can be made against the BBC’s existence, so not sure what point you are aiming at here.

If you buy a TV, but don’t watch BBC, you still have to pay for the BBC, even if you don’t watch it They refuse to compete against the likes of Sky + Netflix + BT Sports, on an open market If you don’t pay, they’ll send you to prison They should scrap the license fee, go to a subscription or advertising model, then let people choose, whether they want to pay to watch their content My guess is the BBC would be out of business within a few years, which is exactly what broadcaster who produces such dire content… Read more »

The facts are true. The news are fake.

The upcoming game is clearly the most important – so far, anyway – of this disappointing season so if we’re not going to get behind the team now, when? Demonstrations against the owner, as long as they are peaceful/lawful, are one thing – although I still doubt their effectiveness – but surely the focus must be on Villareal. To add yet another ingredient to the mix, there are reports that Maurizio Sarri is being lined up as a replacement for Arteta in the Summer. Supporting Arsenal has its ups and downs as well all know to well, but (currently) boring… Read more »

I’ve just had a quick look around for more on the Sari story but I cannot find any “reliable” sources.

Express, Star and Tribal football among many others are not news sources just clickbait sites.

I truly hope that the stories are crap but respect you for posting this, I hadn’t heard about it before reading your post.

With everything else going on, I don’t think I’ve the strength to consider Sarri as a possible (and I take on board what you say about “reliable” sources for the stories) replacement.

For what it’s worth, I think MA won’t be replaced in the Summer, regardless of what happens in the EL – although winning it would clearly make his case stronger. Who knows though – funny old game, football.

Save the protests for the PL games.

If people want to protest then they have a right to. Protests should be allowed before every home game.

How can we be in the semi final tenth time we hardly win anything what a bad luck. Hope that changes tomorrow and the final

Atid
Reply to  Once a gunner

Two 1-0 wins and we are in the Champions League Group stages next season. Let that sink in, cos after the season we have had it would be a fantastic achievement.

True. You do have to be very careful what’s said particularly on social media, and rightly so. Lehmann has paid the (very expensive, in his case) price for making a rash comment.

Really idiotic racist comment by him. Jens Lehmann especially, as someone in a position of power in a sport should know what is and isn’t acceptable. This one stupid comment / poor attempt at humour will cost his career massively and follow him for years, despite any good he does. He probably should have thought about that before he made a needless, insensitive remark about Aogo’s race.

Maybe he’s just made himself available to Ek’s project?

Sure, just wait until we are losing 0-1 and u sub in Willian…

Mikky strikes me as a man of very little principles. That or he’s tummy is much more important

like its been said we’re two wins away from a european trophy and a place in the champions league next season which most would’ve have taken at the start of the season and all would have taken in december. i think it would also change views of potential signings …”arsenal may not be city or liverpool atm. but they win stuff and more importantly they have a manager who wins knows how to win stuff”. considering the season we’ve had it would be no small achievement by arteta if he was to win the europa league. wenger and emery couldn’t… Read more »

Set the animosity to the Kroenkes aside for now.

We need to back the team for today and Arteta.

This is it do or die. Hopefully the players understand this and the manager can impart the urgency.

I agree with Blogs with regard current takeover option, Ek and ex players. I’m happy to have ex players in a small capacity as over sight but I think we need someone experienced The mistake of the Kroenkes is they don’t understand (or care to) the intricacies of the game.They run it as a business purely. Therefore if anything they catered too much to the fans. Rather than taking steps necessary for the club they preferred to appoint people deemed popular like Arteta and Edu. We needed people instead with experience in the trenches like a Campos or Overmaars at… Read more »