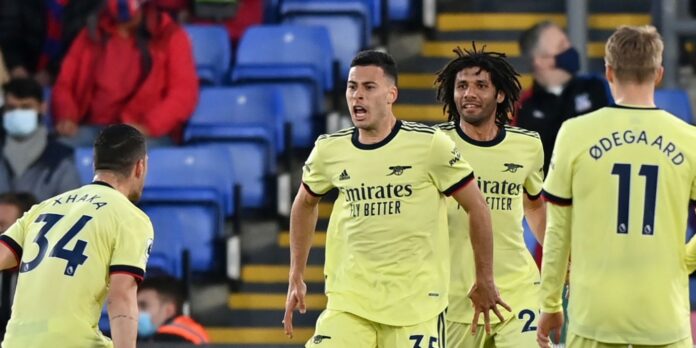 It was far from a vintage performance by Arsenal at Selhurst Park but Mikel Arteta was pleased with the way his players fought to the end to secure a late 3-1 win against Crystal Palace.

The victory, a fourth on the bounce in the Premier League, ensures our quest to qualify for Europe runs until the final day of the season and marks a decent turnaround since our frustratingly tepid Europa League semi-final defeat to Villarreal.

“I think you have to win the four matches to prove that you have reacted as a team,” said the boss when asked about his side’s run since the 2-1 defeat in Spain.

“The reaction and the pain in that dressing room still hurts and that is what we are using in the final games to show everybody and show ourselves that we could have done better, but we’re not going to give up and we’re going to challenge to the last day to give Arsenal a chance to be back in Europe and have the opportunity again.”

He added: “If somebody were to say to us in November or December that we could be in the position that we’re in to have the chance in the last game to qualify for Europe, we’d have said you’re crazy, but we’ve done it.

“I think what ourselves and the number of points that we’ve managed to get in those months, we have earned the right to be in that position. Now it’s time to deliver on the final day, but unfortunately, it’s not in our hands.”

When Gabriel Martinelli managed to poke home from close range as the game ticked into stoppage time, the joy and relief on the manager’s face were palpable. That Nicolas Pepe found space and time to add a third goal was a delightful cherry on top.

Our return of 8 Premier League goals in the final 15 minutes (plus stoppage time) of matches this campaign has been decidedly average so it’s little wonder the boss took positives from the way his players kept battling.

“You saw me on the touchline,” he said. “I’m so happy. When you’re able to win a game in the last minute, it’s always really pleasing because it shows the team how much they want it and [how much they] believe up to the last whistle, so really good.”

I passionately voted remain. But even I don’t want to be in Europe next season.

Too Drunk To Be Offside
Reply to  Johnny 4 Hats

With the team from New Sh*te Fart Lane away at Leicester and Everton away at City, there is a realistic chance they both drop points.

So a win would see Arsenal leapfrog both into 7th and whatever European competition that brings with it (Europa League or Conference League/Cup whatever it is called).

Qwaliteee
Reply to  Too Drunk To Be Offside

Yeah, I’m sold too. Fuck knows why, maybe the thought of that lot up the road crying an absolute river has twisted my arm…..

Yeah, I want no part of the Europa Cashference league

The whole league is just a cash grab by UEFA. It’s obviously not going to get massive audiences, but it’s more football, more tickets, more TV revenue and more dilution of product. The latter being UEFA’s go to management style across all competitions (adding teams to champions league, Europa League and Euro champs – ridiculous).

It’s not really a terrible idea.
The Europa League is bloated with too many games and teams who lower the quality and make group stage games very one sided.
The conference league will improve the Europa League because it reduces the amount of also rans in the group stage and removes the round of32 knock out round.
Also the lower level teams in the conference league play more teams of similar level to themselves.so the matches should be made the competitive. Like the nation’s league
It’s not uefas fault we are too shit to even get into the Europa League.

The Conference League or whatever could be used in blooding youngsters, though it could a distraction for the coaching staff as Arseblog rightly puts it.

Yeah, we said that about the Europa League group stages but before you know it Auba and Xhaka are doing round trips to Uzbekistan to keep the bench warm.

I physically don’t think we have enough players to send 18 non first team players over there.

I’m starting warm to the idea of no European football. It could be our best chance to make a claim for top 4. So this would be a disaster in my humble opinion.

Give youth a chance
Reply to  Johnny 4 Hats

I’m a simple man. I want our team to finish as high up the table as we can. If that means the Europa conference next year then so be it.

We can always treat it as a youth competition, giving valuable minutes to the likes of Azeez, Balogun, Nelson. Okonkwo….

Hell, we could even let Per handle management duties while Arteta concentrates on the first team

Goonerink
Reply to  Give youth a chance

Goonerink
Reply to  Give youth a chance

There’s also the usefulness of an easy game.
we spend half the season with our attacks suffocated, a game now and then where we can regain belief can be a nice remedy.

Obama Young
Reply to  Give youth a chance

If we end up in that conference thing, than I am optimistically hoping that playing easier teams will help Arteta to stop being so conservative. Maybe it will help him learn how to get us to batter low level competition instead of playing so tentatively against teams we should beat.

It’s nice having players with unpredictability in and around the box and players with contrasting skill sets. Martinelli and Pepe are great examples of this. Lets hope we nurture this more next season

I am all for not playing in the Europa Conference League and get the manager more time and resources to focus his attention on the league next season, but I still hope we play in the tournament next season. My reasoning is really simple and maybe I’m missing something, from 2024, two champions league places will be decided via the UEFA coefficient. The UEFA coefficient is decided based on the club performance in the European competitions in past 5 years. If we don’t make any sort of European competition, that coefficient will further dwindle and that door for champions league… Read more »

I also cannot stand the arrogance against it. Playing in any European competition is a privilege.

This has been a strange old second half to the season though because from the outside it appears that we have been a bit crap in 2021 yet if you look at points accrued in 2021 we are sitting 5th on 38, only 2 points behind Man Utd and Chelsea who sit 2nd and 3rd and ahead of Leicester, Spuds and Liverpool. Whilst I agree that we need to improve, it appears we aren’t as bad as we think. Of course the overall table doesn’t lie and the start of the campaign was poor, for which we couldn’t recover, but… Read more »

I assume you didn’t watch the Palace game then. Ignorance is bliss.

Other results will align

Arteta continues to talk absolute nonsense and yesterday’s victory turned out to be thoroughly undeserving.A fairly competent first half was followed by decidedly mediocre 40 minutes where everything looked to unravel as soon as Arteta…in his infinite coaching wisdom…removed Saka and changed a side that had looked “balanced”…for once…into a lop-sided mess. Once again Odergaard looked throughly lack-lustre and managed to slow everything down to a predictable crawl…For reasons best known to himself Arteta decided to persevere with a completely ineffective Aubamayang… and more by luck than judgment the 15 minutes that he allowed Martinelli onto the pitch bore fruit… Read more »

You only whinge when you’re winning…

You know what? Fuck it, it’s high time we finished above those noisy cunts up the road and if we get into this Mickey Mouse tournament, then just use it to bring on the youth team and the stiffs. If Arteta has to chase off midweek to Darkest Gladenfrosch, then that’s his fault. At least we’d keep the Euro run going and finish higher than the scum bags – a pittance, I know, but this season has been such a pig’s breakfast anyway, this would at least represent something; pitiful as it is. Also, with their 60 year anniversary of… Read more »

Did anyone else absolutely love the absolute silence from the crowd when Pepe made it 3-1? You could have heard a pin drop

As anyone noticed since we began to play Europa competition, it made us to discover some good talent, like Saka, ESR, Nelson, Wilock, Azeez the lists goes on maybe we can discover more with this competition too

Carlton Kgololana
Reply to  Once a gunner

We got da League Cup for that bro, it’s too exhausting these games and then you know we will lose to the only decent team in the competition… Athletico, Chelsea, or not even getting to Man United this season, losing to half decent Villarreal with our old boss. Good luck to the Yellow Submarines and Unai next week!

It's up for grabs now

All I can see is that to finish 7th that means we leapfrog Spuds!!! Our worst squad for a long time (who were toying with relegation around the same time they were top and having delusions of winning the league) finishing above them is worth the euro sh!tshow of the conference crap. Plus we get a few million more in prize money I think. Like most say, use the euro thing to blood some youngsters in. I would love it if we finish above them……love it!

How come we used next season’s kit?

To make some money

I can’t believe we can afford not to play in any uefa competition. Yes, how the mighty have fallen. But don’t the winners qualify for the next tier of competition the following year. Three possible cup finals in three years. Wishful thinking I know but we can’t keep fucking up semi’s and finals forever.

we’re gonna need to win this europa conference next year as our ticket to enter europa league. screenshot this comment for when we’re 9th with 5 games to go next season.

All the more irritating bc had we banked just one of our many slip ups this season, we would be firmly in contention for at least 6th.

That Arteta was unable to ensure this is testament to his failure this season.

Still, he has a chance (more through luck) to finish above a faltering Spurs.

It could also end up squeezing into 7th with Everton facing City which means the Euro conference which no one relishes.

But as high a finish and above Spurs would be somewhat face saving.

He added: “If somebody were to say to us in November or December that we could be in the position that we’re in to have the chance in the last game to qualify for Europe, we’d have said you’re crazy, but we’ve done it”
Honestly sometimes arteta just comes across as deluded. Talking up being in with a chance of 7th on the last day.
As some sort of achievement