THE LOWDOWN
Arsenal Women travel to Everton on Sunday for the penultimate WSL fixture of the season knowing that one win from their final two games all but guarantees them Champions League qualification. The Gunners defeated West Ham 2-0 in their game in hand on Wednesday evening giving them a three-point cushion over Manchester United in 3rd place.

With a goal difference that is 26 goals superior to United’s, a win on Sunday basically finishes the job. Willie Kirk’s Everton side are on something of an island in 5th place in the league but this is undoubtedly one of the tougher fixtures in the WSL calendar. With talent like Izzy Christiansen, Jill Scott, Hayley Raso and Valerie Gauvin, the Toffees carry plenty of threat.

https://t.co/hwpHi2dNUv With graphics from @miedemastuff I analysed how Arsenal used Vivianne Miedema as a no.10 last night to

Joe Montemurro’s side are on a hell of a run at the moment, they have won each of their last eight games without conceding a goal now, despite a constantly switching back line. The season became interrupted for them after Christmas with a series of postponements followed by chastening defeats to Manchester City and Chelsea in February.

Since those defeats, Arsenal have had a much more regular calendar of games and that rhythm has shown in recent weeks. Everton is the fixture that will have had the red ring around it on the fixture calendar. The Gunners’ goal difference means they can afford one defeat in their final two games so long as they win the other game but Arsenal will be keen to keep their momentum going and seal the deal as quickly as possible.

A WORD FROM THE COACH
When Arsenal thrashed Everton 4-0 in December, they picked apart Everton’s midfield diamond with ease. Everton have since moved to a 433 formation and when I spoke to Joe Montemurro on Wednesday night, he was cognizant of the different challenge that Willie Kirk’s side will pose on Sunday.

“We watched some videos this week actually and they’re a little bit different. They’ve gone a little bit more 4-3-3, and they defend as a 4-1-4-1. They will use the width with Lehmann and Raso, who are both very quick so I think they’ll use width this time.

“It’s nothing that we haven’t seen before and really it’s going to be us trying to make sure we find the spaces. I’m actually really looking forward to the game because they’re a very good team and it’ll be a good game.”

TEAM NEWS
Jen Beattie (hamstring), Lisa Evans (achilles) and Viki Schnaderbeck (knee) are all still out for this game, while Fran Stenson is out for the season with a thumb injury that has required surgery. Steph Catley should be in contention for some minutes after two games as an unused sub following her return from hamstring surgery.

LAST TIME OUT
Arsenal were 4-0 winners over Everton at Meadow Park in December thanks to goals from Jordan Nobbs, Caitlin Foord, Jen Beattie and Beth Mead. When the teams met in this fixture last season, the Gunners were 3-1 winners in the Northwest with a brace from Vivianne Miedema and a Kim Little penalty. Chloe Kelly pulled one back for Everton late on.

THE OPPOSITION
Everton are looking to gatecrash the WSL’s big four and turn it into a big five. After a very indifferent 2018-19 campaign where they just finished clear of the relegation zone, they started to invest in the team much more seriously. This season they have brought in the likes of Valerie Gauvin, Jill Scott, Izzy Christiansen and Hayley Raso.

However, they have underperformed in the games against the teams above them, a fact Toffees boss Willie Kirk acknowledges, “We’ve had six tests in the league (against the top clubs this season) and I don’t think we’ve done ourselves justice. We go into test number seven on Sunday and we need to take something from the game.

“Next season we really want to be in and amongst them (the top clubs) and we want to upset that apple cart. Sunday will be a good test and it will give us another gauge of where we are and where we still need to develop.”

💪 Back after 376 days out
🧠 Physical and mental strength
🤩 Inspired by cousin @JesseLingard@gabsgeorge and physio Charlotte Doughty speak to @SarahHalpin9 for our latest podcast – out now! ⬇️

PLAYER TO WATCH
Lotte Wubben-Moy has been the only constant in Arsenal’s run of eight consecutive clean sheets, playing each game in that run and being voted March’s Barclays WSL Player of the Month into the bargain. The Bow born centre-half has been given an extended run due to continued injury troubles for first-choice defender Jen Beattie.

This will be Lotte’s biggest test since the Manchester United game in March in which she distinguished herself with a towering performance and a crucial second-half goal. Up against the likes of Lehmann, Gauvin and Christiansen, Everton will have plenty of forward runners looking to break in behind. Wubben-Moy will need to continue her recent form to maintain the clean sheet record.

What’s better? Sitting down with @IanWright0 or being crowned @BarclaysFAWSL Player of the Month? @lottewubbenmoy did both! Take a listen as Ian and @ArsenalWFC's Lotte discuss all things football and Lotte’s career to date: https://t.co/cb4r0SXhR8 ⚽️ 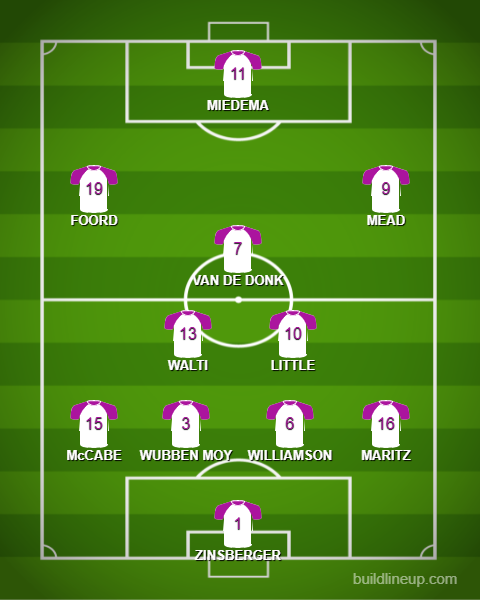 HOW TO CATCH THE GAME
The game will be played at Walton Hall Park on Sunday at 1pm behind closed doors. The match will be streamed live in the following places: Optus: Australia. Nent: Estonia, Latvia, Lithuania, Iceland. Sky Mexico: Mexico, Guatemala, El Salvador, Honduras, Nicaragua, Costa Rica, Panama, Dominican Republic. FA Player: Rest of the world, including the United Kingdom.

COMING UP
We will have the usual post-match reaction from Joe Montemurro on the site on Sunday afternoon, as well as the usual match analysis piece online some time on Monday afternoon or evening.

This team have enough machinery to compete for trophies.

Finally Real Arsenal FC plays again. It has been too long. Thank you for your work.

I think this game is being broadcast on (free to air) SABC in South Africa.