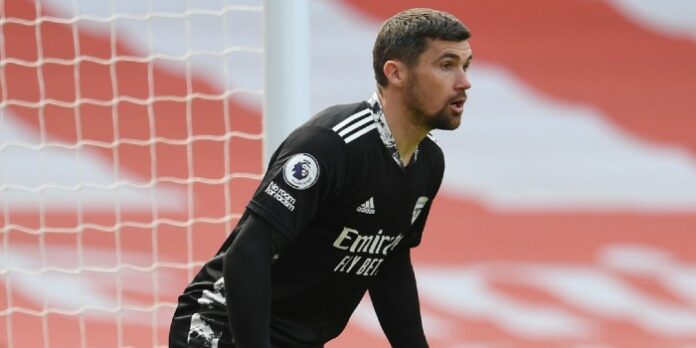 Mat Ryan says he’s hopeful that he can return to Arsenal next season but admits his representatives will be assessing a number of options this summer.

The Australian keeper appears to have burnt his bridges with Brighton after criticising manager Graham Potter for the way he was unceremoniously dropped last season and despite being under contract for another year at the AMEX he’s not expecting to play for the Seagulls again.

The Gunners are thought to have been impressed with the way Ryan acquitted himself during his five months at the club and it was something of a surprise that a loan extension or permanent deal wasn’t announced before the end of the campaign.

According to The Athletic, our desire to fill our homegrown player quote may have counted against the 29-year-old.

“I’ve got full faith in the team around me – my agent, family, friends – that we’re going to get a couple of options hopefully and go about making what’s going to be the best decision for me,” he told Fox Sports.

“Hopefully, Arsenal becomes one of those options as well that we can look at and see what can happen there, but at the minute it’s still quite early. The season’s just finished.

“I’m taking it day by day and seeing where my journey takes me.”

Given Ryan’s age and experience – he’s played 275 games in Spain, England and Belgium – there are bound to be plenty of suitors. Three of those games came in Gunners colours and he’s pleased with the way his six-month experience in north London played out.

“I’ve learnt so much in my experiences so far, all that’s being with a club like that, the resources, the personnel, the quality on the pitch, the enormity of the club on a global aspect … it was so cool to be a part of.

“I was very fortunate but at the same time I worked hard to get a couple of opportunities. I set a couple of little goals when I signed with the club, ticking them off one by one.

“I wanted to play games. It started with an unfortunate loss, had a draw after and then finally got a win.

“It was a great experience and I was really proud of how I did and really content with how I did, and I showed that I have the capability to play at a level like that.

“I look forward to seeing what that little period now means for me moving forward. At this level you’re always as good as your next games, not necessarily your last games.”

Back up goalkeeper is an odd life.

Spend most of your life on the bench with zero hope of playing unless the number 1 gets injured. And then when you get the nod it’s such a vital position.

You have to be good enough to play for the first team and content to sit on the bench.

At mid prime age for a keeper I’d be surprised but delighted if Ryan stays.

Var Will Solve The Problem
Reply to  Fezec

I want him to stay but it’s the number one spot that needs competition. Leno has been good but playing out from back means we need a keeper equally comfortable with his feet and hands. Someone like Ederson who isn’t easily pressed into mistakes.

A Different George
Reply to  Var Will Solve The Problem

Ederson makes mistakes, including embarrassingly ridiculous ones, as all keepers do. He is also the best keeper I have ever seen at passing the ball from his own area to an attacker on the move (which makes it even more difficult for an opponent’s defenders to join in the attack). If you find someone else like that, tell Edu.

Stephen Fowler
Reply to  Var Will Solve The Problem

It isn’t Leno’s feet that worry me. It is his decision making and command of his box.
He needs competition.

Ryan’s been good, unfortunate but good, in the 3 games he played for us.

That said though, I honestly believe Szczesny would give Leno a run for his money. Would always have the Smoking Pole back, and it was never really clear why he couldn’t be brought back after the Roma loan. I mean he was nominated for the Yashin Trophy and was the Serie A GK of the Year in 19-20. Plus he was always Arsenal’s.

Would be nice to have those two at Arsenal though that’s too far-fetched.

Gervinhothegoat
Reply to  Murphy was an Arsenal Fan

We don’t need clowns like szczeny back. I’m not a fan of arteta but I applaud his efforts to return some discipline and professionalism to arsenal that has been sorely missing for years.

Vonnie
Reply to  Murphy was an Arsenal Fan

Szczesny needed to grow up and wasn’t going to do that at Arsenal with Wenger, he was appalling his last season and wasn’t got rid of because of a fag in the showers. Every shot that season went in at the near post. I wouldn’t want him back, he’s past his peak and we could do better. Also Raya isn’t the answer.

Murphy was an Arsenal Fan
Reply to  Vonnie

There’s a big difference between the Chesney that left, and the Shtanshney that is.

I quite like Ryan. It might seem he’s just a back-up for Leno but things can change suddenly.
He may just be one dodgy form/injury away from having an extended stay between the sticks next season.
I remember how Emi Martinez took his chance so well that he outgrew the second keeper tag in a matter of 3 months.
I say, sign him.

The Home Grown Players rule is something to take into consideration. 17 is the maximum number of non-HGP allowed to be registered in the Premier League squad.

From the squad which finished the season, we’re currently down to 13 with Odegaard, Ceballos, Ryan returning to parent clubs and Luiz gone. So there’s a bit of wiggle room there. I certainly hope Odegaard returns though.

One would imagine Runarsson would have to be moved on – no point a #3 keeper taking up a value non-HGP spot.

Good point, if he doesn’t leave he shouldn’t be registered.

Another reason why the Rune was the shite-est signing we’ve made in a long time… not as cash-costly as ‘not-so-free-Willy’, but utterly bereft of any reasoned logic and strategic sense.

I thought he commanded his area great in the few games he played. Great back up, solid and reliable and enough experience to push Leno or drop him if needed.

Not a bad lad to have on the books. Good back up for Leno.

He’s the best thing to come out of Plumpton, sign him up!

I think he is as solid of a number 2 as we can find, he got dropped at Brighton for a keeper who is now in the Spanish squad. Not being homegrown is IMO the only thing that stands against him and it might be a significant one.

His appearances have come in a small sample but it’s been decent from the little we’ve seen of him.

Does Chesney count as home grown under the current rules?

Crash Fistfight
Reply to  Give youth a chance

Yes. He was homegrown before he left, so that doesn’t change. As long as a player spent 3 years with a team in the English football system (including Welsh teams in the Football League, but not Scottish teams, hence why Kieran Tierney doesn’t count) between the ages of 16 and 21, they count as home grown.