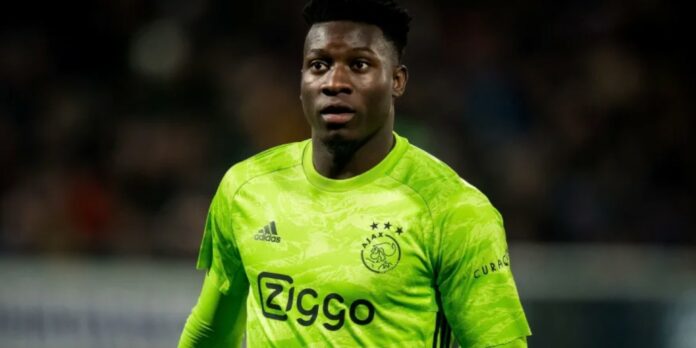 According to Dutch broadcaster NOS, Arsenal “has the best credentials” to sign Ajax goalkeeper Andre Onana even though the player is currently serving a one-year UEFA ban for a doping violation.

The 25-year-old Cameroon international hasn’t played for his club since January after a drugs test found banned substance furosemide in his urine sample but he’s hopeful that an appeal at the Court of Arbitration for Sport, set for tomorrow, will see his suspension reduced.

Onana claims he mistook his wife’s medication for aspirin and says the ban is “excessive and disproportionate.”

While UEFA accepts the player wasn’t trying to gain an unfair sporting advantage they made clear when dishing out his punishment that “an athlete has a duty of care at all times to ensure that no banned substances enter the body.”

With Mat Ryan returning to Brighton and question marks over Bernd Leno’s future, Mikel Arteta is known to be after at least one keeper this summer. Moreover, as a result of his current circumstances, Onana is likely to be available at a knock-down price.

If he has to sit things out for another seven months, he might only cost a couple of million pounds. If he has his sentence reduced, he’ll still be available for between £6 to 9 million.

Given his age, experience and pedigree, a punt on his long-term value seems to be something we’re weighing up. Of course, we’re not alone. Manchester United and PSG are also circling.

That’s what I call the twat every time he appears on MotD.

Got the second one, Wesley Fofana

Josh – Let’s just say the fans have reason to be excited.
*Three months later*
Fans – Ok, the only signing we made all summer was a banned goalkeeper.
Josh – Yeah but he’s got drugs.

So really you’re implying the kroenkes are signing this guy to provide drugs to the fans to impair their minds and distract them from the reality of no signings and mediocrity? Shrewd business.

He’s going to have to bring A LOT of that stuff.

It could be worse. At least he’s not banajaxed.

Come on! Surely the level of wit I’ve mustered here deserves better than one thumb down?

Not the first one who pretended he took his wife’s medication. There will soon be one in the future who got contaminated during intimate relationship.
Frankly a GK who needs substance to be able to jump, we can do without.

The substance is a diuretic, doesn’t help with performance directly but it does with weight management although you would run the risk of dehydration.

How many times has anyone mistaken their wife’s medication for asprin?! Reminds me of Shane Warne’s mum’s medication excuse.

But it wouldn’t give any competitive advantage – unless he was worried about high blood pressure!

Strange ban all round.

Someone On The Internet
Reply to  Sak, Lac & Craic

It’s banned because it can be used as a masking agent, ie to hide something else that does give a competitive advantage.

It seems like a very straightforward ban to me: the arbiters accepted that he took it by accident, but he still put a forbidden substance in his body, so it’s a one year ban (not four).

Drabwilly
Reply to  Someone On The Internet

Not to do down keepers, but how much effect can performance-enhancing drugs really have on their performance? It’s not like they’re running around for ninety minutes.

Wasn’t Kolo Toure in a similar situation with his wife’s slimming pills?!

Strange but if he can show her prescription surely it holds more weight.

It doesn’t matter if she had a prescription. He still took it & is responsible for what he puts in his body. Otherwise you would hear a lot of athletes talking about how they were accidentally injected with their wife’s steroids.

If your comment was a direct reply to adorno’s this would have been a great pun.

That’s what I thought.

Viv The 🐐
Reply to  PeteyB

He wants to say in press conferences in Januray, that half of Africas squads are represented by Arsenal. I like it, that more african players make “a big move to the Prem” but dayum, I already fear that month.

The Beast
Reply to  PeteyB

Also, probably not the best transfer policy to ignore an entire continent of talent because of a tournament.

Interesting. He’d be gone for AFCON though.

If his ban stands, then he likely won’t be available in enough time to be registered for the tournament.

The next editions after 2022 of AFCON are going to be from June-July.

Would a UEFA ban bar him from AFCON?

Yeah it apparently does (as per the statement on the Ajax website). I suppose it’s a more serious “offence” than the odd red card.

He was quality in Ajax’s CL run.

He couldn’t have been that good, because Ajax didn’t win it…….

I’d say bite the bait. We probably won’t get a transfer fee this low for a first team goalkeeper with Champions League experience.

Barcelona still signed Suarez, even though he was suspended for pretty much 5 months for chomping on Chiellini’s apparently irresistible collar bone.

Even if his ban is upheld, he’ll miss next year’s AFCON (which is an unpopular topic around these parts). Coming from Barcelona and Ajax, possession-based football should be second nature to him.

Of course, knowing us, he and other Ajax guy probably aren’t washed-up enough so it probably won’t happen😜.

Zzzzzzzz…let me know when Chelsea are in business for some 35 year old needing a 5 year contract. Is John Terry still playing?

I’m sure Edu will be able to tell you.

This might be a good opportunity to get a long term Leno replacement on the cheap. He won’t be much use this season though: the appeal seems unlikely to succeed, and he currently isn’t even allowed to enter any football-related facilities. By February he’ll have been doing nothing but working with a personal trainer for a year.

And then there’s Guendouzi.

We got Xhaka instead of Kante.

Viv The 🐐
Reply to  StockholmGooner

The more I think about it, the more justified it is, that Arsene did not keep all the power.

Qwaliteee
Reply to  Viv The 🐐

I’m sure the hard as graniters will tell you we got the better deal… Lol.

Kante, wow. Imagine. He was impecable in the champs league final. What a player.

You only imagine things that haven’t actually happened…..

As a harsh critic of Wenger’s last decade at the club even i don’t think Xhaka was that bad a signing, it was just another sign of him failing to keep up with high press modern football. If Xhaka was bought 10 years earlier i think he would have been a top player. Mustafi on the other hand was much worse for the money, i don’t think he would ever have been called a top centre half in any era of football. Then there are players like Perez for £17m or even the injury prone Welbeck for the same money,… Read more »

People often forget what a calamitous pair Mertesacker and Koscielny could be at times.

And when Arsene went out and signed Mustafi we all thought it was problem solved. How wrong we were. Thanks to that clown we dropped out of the top four – and haven’t been back since…

I guess any sponsorship deal with Kellogg’s is out of the question with him on the books.

Far fetched I know but this is the place for it. Let the far fetchedness reign!

Man. That is really clever😁.

A Different George
Reply to  Twatsloch

Well, when I saw his name, my first thought was that he was probably very good with his hands.

Nice! As a committed onanist, I welcome this transfer.

Can we sing “Onana, I don’t want anybody else, when I think about you I touch myself” for him?

This story is pure onananism…

I’ve seen him in a couple of games. At least when I saw him, he’s a keeper who likes to stand on the goalline and have not a good presence in the box. He makes also strange errors, in that aspects he fit Arsenal.
Keep Mat Ryan and use the money om a left back understudy and midfielder

so we don’t sign Ryan as we need more homegrown players…then we go for a Cameroonian. How very Arsenal!

Viv The 🐐
Reply to  mackiwi

The HG players will come. And most of our good players are in th U21 squad. It should not be a problem going forward.

One time I banjaxed my banana while practicing onanism.

It is 5am here, so I totally misread the title as “Arsenal linked with banjaxed keeper Onana”, and thought to myself, “Right on!”

Onana is convinced to join since arsenal will have the same jersey as ajax next season.

The excitement is just too much to bear.
I don’t know why he is leaving Amsterdam – I thought that would be the perfect place for him with pot being legal there.
He might even be getting it from the same dealer that Arteta, Edu and Kroenke go to because obviously they are on some kind of drug to want to sign him.

Bullshit excuse. Who knows what his wife’s medication was. But he knows what’s in aspirin. Guaranteed they don’t look the same.

Drugs cheats are the next scandal in football.

The Beast
Reply to  Jasonissimo

So, just to be clear, you have no clue what his wife’s medication was but you’re certain it looked nothing like aspirin?

Logic checks out. Absolutely no need to think about it longer than a couple of seconds.

Jasonissimo
Reply to  The Beast

Come back when you know something about the topic at hand.

Ajax & Arsenal fan here. This is actually a very good signing. Unlike Leno, Onana has cojones when it comes to passing out from the back.

Just a shame that this is the way he’s leaving the club after everything he’s done for us in the league and champions league.

Is it really a negative to swoop a quality keeper for spare change, even if it’s a futures thing? It shouldn’t mean anything in the transfer window as it is a paltry sum. Let’s keep our eyes on the things we can right and truly fuck up.

I agree – it completely future-proofs us against Leno’s decision. We could even sign him, give him a year to recover his form in the u23 while being the best second-choice GK in the league, then let Leno move on next year with a ready-made replacement already at the club. I think it’s a fantastic idea.

First, it’s Bissouma; now Onana.
Are we in a secret competition for which European club will lose the highest number of players to the African Nations Cup in January?

A P
Reply to  Man Manny

How else will Arteta explain the mid season slump?

Qwaliteee
Reply to  A P

Crafty bastard. He really has got a process….

The Beast
Reply to  Man Manny

So we’ve filled our African player quota at 3 then?

The Beast
Reply to  The Beast

Are we planning to present an Arsenal eleven to the ACON next year!

Sign Onana now, persuade Leno to stay one more season. Seems like a cheap way to get a direct replacement, the third/second (when Leno moves) keeper can be HG.

Did the drugs squad unzip an Onana…

Turn On, Tune In, Drop Out of the Premier League