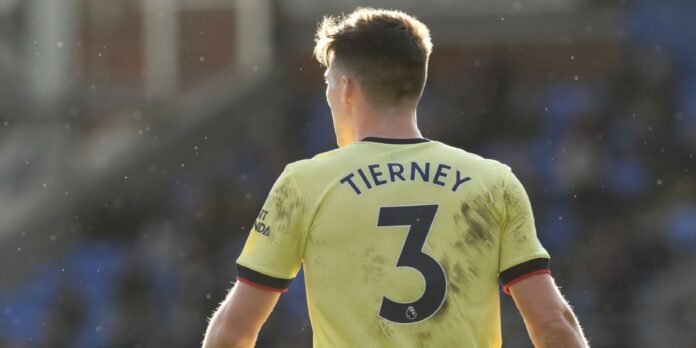 Kieran Tierney has revealed he has signed a new long-term deal at Arsenal.

Speaking in a live interview on Arsenal.com, the Scotland international confirmed the news that was first reported last week. It’s believed his wages will increase to around £110,000 a week.

The Gunners signed Tierney from Celtic two years ago in a deal worth £25 million and after an injury-hit first season, he’s since established himself as one of the club’s most consistent performers.

To date, the 24-year-old has made 62 appearances, scoring three goals and making nine assists.

“It feels amazing,” said Tierney when asked about the new contract. “The manager came to me and said, ‘I want you to extend your deal, we’re so happy with you.’ It was amazing for me to hear because i’ve worked hard since I joined.

“I had a hard first season with injuries and Covid but last season it really picked up for me, the club have been brilliant with me, so I was more than happy to extend.

He added: “The vision of the club and where it wants to go and the expectations of the club is where I want to be in football; at the top. There’s no doubt about it, we’re not where we want to be just now. But we’re going in the right direction.

“The way the club is run on the inside is amazing, I love all the staff, I love all the players, I love the manager and working with them is an absolute joy. Being happy in life speaks for a lot and I’m happy right now.”

Speaking about the deal, manager Mikel Arteta said: “This is great news for us today. As manager of the club, speaking on behalf of the coaching staff and the entire staff, it’s a pleasure to work with KT. His quality, energy, commitment and professionalism, not only on matchdays, but every day in training are always at such a high level.

“KT gives us so much extra strength both defensively and offensively and it’s great to know that he’ll be with us for the long term. Since his move from Celtic, his work ethic and quality has ensured that he is already one of most exciting players in the Premier League and a hugely important part of our team, both on and off the pitch.

“I know all the fans will join me, the players and staff in looking forward to seeing KT playing in an Arsenal shirt for a few more years!”

Following Scotland’s exit from Euro 2020, Tierney is now set for a bit of a break. He’ll miss the start of pre-season but could play a part in the trip the US.

Legend…
Anyone know how long the new contract is for? Whatever it is, the extension is probably too short unless we’re talking a decade long deal.

I think Fabricio reported it as a 5 year deal.

It is a five year deal.

That aught to sell a few short sleeved shirts!

Yes mate! Tierney has all the makings of an Arsenal legend. Plays with skill, pace and heart and turns up to a game with a fucking Tesco bag. What a man!

a very underrated and essential piece of summer business. knew this was coming, but glad it’s done. our future captain, mr tesco tierney himself.

I don’t think he is under rated by anyone. Everyone has been waxing lyrical about him. My question is he is a well sought out player and there are better opportunities out there than Arsenal. What have they told him to convince him to stay? If I were him I would look at somewhere like Bayern or PSG so they must have something up their sleeves for him to commit to a five year deal – either than or he has no ambition, which i seriously doubt…

i meant underrated piece of transfer business, and as for your question there’s no Tesco’s in Munich or paris

Maybe he likes a challenge! Seriously though, come on people have some confidence, Arsenal are a massive club and there’s there’s clear strategy for recovery, there was a tangible upward trajectory last season to build upon. Tierney is a critical piece, hopefully we find his right sided twin this summer.

A Spurs fan I assume

Bloody hell, you go straight in with the really vicious insults, don’t you?
You could have started out nicely by calling him a cunt or something, but no, it’s two footed, with studs, over the ball into the standing leg straight off.

Shit. Nine assists in what is really just over a season of football is really good. I knew his numbers were good but that’s really tidy. If he does that every season then that accounts for a nice chunk of creativity. As a player and a man, I really can’t speak highly enough of him. I can’t remember the last time we had a Kieran Tierney. Maybe Ray Parlour or someone like that. If we were to add James Maddison, Ben White and Calvert Lewin then we’ve got a serious spine of British talent. I think you’d have to go… Read more »

If we sign Maddison, White and DCL that will be closer to 200M quid than 150M…surely not going to happen.

Almost definitely not. But maybe 2 out of 3? There’s definitely a profile we are perusing. And I’ve got to say I like it.

And with some player sales and hopefully a few big wages off the bill, you never know. Just Laca, Willian, Kolasinac and Xhaka leaving save us £25m a year. And that’s without fees. Add that to the money we now save on Ozil, Mustafi and Sok. And David Luiz. Plus Hector and AMN to go for decent fees.

We may have more money than we think.

Wishful thinking methinks, most of the dross will be loans with us paying the wages. Willian’s already ordered a new deck chair for himself at Colney!

I saw it reported elsewhere that Stan has gifted Arteta with £250m to splurge with.
If true, you might suspect that Stan has something to feel guilty about.

(which is also probably why if I type “Stan apostrophe s”, autocorrect changes it to “Satan’s”)

We had the Theo-Ox-Rambo-Wilsh-Chambers-Holding core for half a second, until we didn’t.

We currently have a (Balogun? Nketiah?)-Saka-ESR-Willock-Holding-Tierney core in the making, if we back them. Big “if”.

Do you think we could get Tesco on the front of the shirt?

Get in there!
Although we’ve seen it coming it’s still a fantastic news. A brilliant and committed player sticking it out with us when things aren’t bubblicious atm. Also cheers to Edu & co. they are really stepping there game up, slowly but surely we’re making progress!

Hopefully first good news of the summer. (though the length of the To Do’ list for Edu etc must be frightening!)

What a player. What a guy.

He was definitely hoping to sign this at least a week later, but from a selfish arsenal perspective I’m glad he’s got time for a proper summer break

Completely agree on the proper break. He probably needs it more than anyone else in the squad to some his injury history

Love it, and love what he and Saka say about the club and staff at every opportunity. Refreshingly positive.

Very good. Should check with him on how ajer is doing (i think he”s the centre back at celtic). Might be better than blowing 50 mil on white

I know there’s a lot of uncertainty over Edu and Arteta, but I feel that they are building the future of Arsenal. Yes, they make some head-scratching signings but tying down Saka, Tierney, Martinelli, Balogun, and soon ESR gives us a foundation for the future. I feel they are also trying to build a young and English core, which I think is critical for future success. We fans are frustrated and very critical of their decisions, but we should all play the wait-and-see game. Arteta and Edu will surely make mistakes, but maybe there is a method to their madness.… Read more »

kasgood
Reply to  Me from Here

This obsession (AFTV) with a creative midfielder being bought, leaves me thinking about ESR his contract & interest from Villa etc. I mean he doesn’t want to be pushed down the pecking order here at Arsenal.

The best news to come from Scotland since the Romans got planning permission for Hadrian’s Wall!
Love the guy.

Very nice.
Odd that I was on a blog earlier about Roman emperors and some commentary about Tierney broke out…

Brilliant. Glad this is over the line with minimal fuss. Just like Tierney as a player, no nonsense. Some of the others could take a leaf out of his book.

I love Tierney. He’s exactly what I think a fullback should be, and with a winner’s personality on top of that.

That’s a pretty healthy salary he’s going to be paid, all completely deserved – and still less than half what we’re paying Willian. How that contract ever made sense to anyone for non-Kia reasons, I’ll never understand.

Arseblog could u please creat some sort of chatroom here, at times i get floored and there is nothing like news here. I think it would be the other step from the Arsebiz,