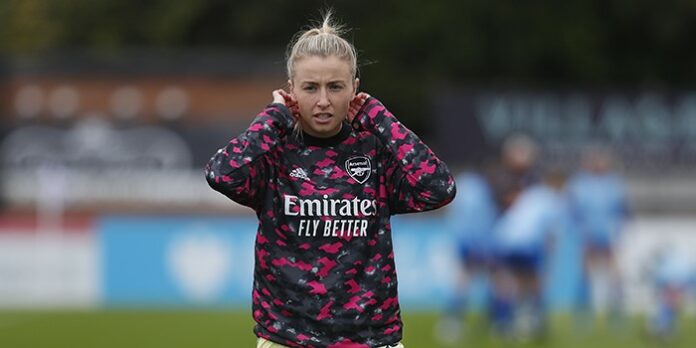 Arsenal announced today that Leah Williamson has signed a one-year contract extension with the club. Arseblog News had the opportunity to speak to Leah and this is a transcript of our conversation with the Gunners number six.

AN: The announcement has happened quite late with the season over and your contract nearly having expired. Did you have to think hard about this deal and, if so, what did you have to weigh up?

LW: This has been the toughest decision, contract wise, that I have had to make in terms of where I am in my career and where the club is at. First of all, I had to weigh up whether Arsenal has the ambition that matches my own, do we want to be a team that is competing, can we compete? Those were the things that, I wasn’t so much waiting on as I wanted to confirm. As you know, Arsenal is everything to me but it was time to make a football decision and not be blinded by my absolute love and affection for the football club. In the end, my football development was my priority and I still feel like Arsenal is the place for me to become the player that I want to be. I hope that you guys see that next season as well.

There’s no other way of saying it really…@LeahcWilliamson loves this football club ❤️ pic.twitter.com/fQ5UZTVbOT

AN: At least publicly, Arsenal are without a manager at the moment. Do you know who it is yet and, if so, have you been able to have a conversation with them?

LW: I was really hoping that was something I would be able to do, to meet the new manager and speak with them, unfortunately it wasn’t possible in terms of the timeline and when I needed to put pen to paper. But I feel fortunate and this is one of the reasons I love Arsenal and the type of football club that it is but I have been in regular contact with Vinai (Venktashem, CEO) and those people higher up in the club because they understood where I was at. Every player needs that sort of information if they are about to sign a new contract. They told me what they want in the new manager and my development is important to me and player development is top of their list as well. I wanted to know that the ambitions I think the club has they do have and after those conversations with them so I am happy to put my trust in them to pick the right person for the job.

AN: You will be playing at the Olympics in Tokyo this summer and Arsenal have Champions League qualifiers straight after the tournament finishes, do you know yet whether you will be involved in those qualifiers?

LW: That will come down to the new coach I think. A lot of the coaching staff are staying at the club so I’ve had some discussions about the need for rest and recovery when we get back. But there are so many of us at the Olympics that it would be difficult to fill out the squad without all of us. It might also depend on how far we progress in the tournament so there’s no decision on that yet. Though I read your article earlier about the possibility of a pre-season game at the Emirates and I think I would want to be involved in that, so I might sack off a holiday if that happens!

Legend in the making.

Great news for Leah and Arsenal Ladies.
I’m a bit concerned that she had to think about whether Arsenal’s ambitions matched her ambition.
This seems to be a question that is asked about this club and of Kroenke.
The question of ambition.

Timorous Me
Reply to  leon

Let’s hope that these kinds of questions–whether from Leah or the men’s side–put some positive pressure on management, knowing that influential, important figures within the club have these high expectations because they know exactly what Arsenal could and should be.

Thanks, Leah. So glad to hear that.
Hope the club take her reservations seriously.

There is nothing in the world Leah would want more is to be at Arsenal and win the Champions League with this club. I feel like for the past decade, she’s just been happy to develop at this club. From ‘I’m in the Academy’ to ‘I’m training with the 1st team’, to ‘I made my debut for the 1st team’ to ‘I’m a regular started and #1 choice for CB’. Every step of the way, she’s grateful it’s with this club and she didn’t imagine going somewhere else as long as Arsenal wanted her. But then other clubs show interest… Read more »

What a lovely comment!
I wish we still had more of the wonderful Dutchies. I’m English but the Netherlands Women team is my favourite national side, partly because of the great Dutch players at Arsenal. (I’m very much club before country.) I still have a soft spot for the French national men’s team because for the same reason.