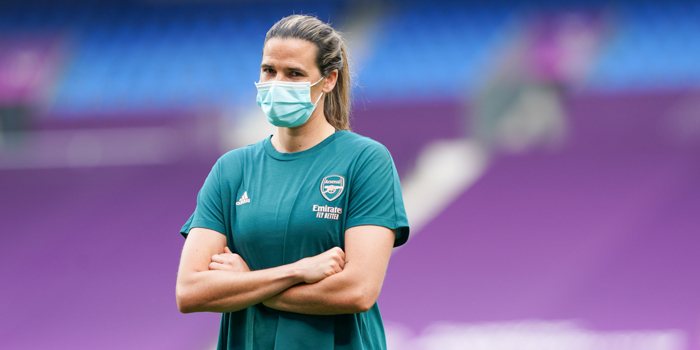 Arsenal goalkeeper Lydia Williams has triggered an option to extend her contract with the Gunners for another season. The Australian joined the club last summer from Melbourne City on a one-year deal with the option for a further year.

The 33-year old will stick around for the 2021-22 season despite the departure of compatriot Joe Montemurro as manager, however, her international teammates Steph Catley and Caitlin Foord remain a big part of the squad.

Fellow goalkeeper Manu Zinsberger extended her contract earlier this year. “I’m really happy!”, Williams told Arsenal.com. “I just can’t wait to get back and see the fans now. I’ve seen everything on social media, but now I want that fan experience on the pitch and during games because that’s the one thing that I’ve missed the most.”

IMO, looking at the team’s current situation, the dvd rumors are starting to subside, so are the rumors
Malin’s departure and then Lydia’s contract extension, basically arsenal have appointed a new head coach, I hope it will be Maria Pry

For me we have now 2 options. First is that we have new manager in place, we just can’t announce them yet, because of contractual obligations/waiting the contracts to be over/bought out, but the new coach is consulted in these player decisions. Or the second options, we are still searching the new coach, but despite that we are signing players etc. In the second case we are absolutely done as a club, because we don’t have technical director type also in womens side. Vinai and Edu making player decisions is not fun. I am absolutely Ok with signing Lydia for… Read more »

Hopefully Fran Stenson can get a few games this year…

Assuming she is fit. Tail end of last season she had a dodgy thumb which stopped her playing.
We all know how these seemingly minor injuries turn into major unavailability if you wear an Arsenal shirt!

I think we still have yet to see the true capability of our goalkeepers following the coaching shake up. The way they were being asked to play often put themselves, and our defence, under unnecessary pressure during games. Having said that there are a fine crop of goalkeepers in WSL at the moment but even Manu is still comparitively young and gaining experience hence the appointment of Lydia.

I am one of the few who actually didn’t have problems with our goalkeepers taking risks playing out. There were few dodgy moments, but I don’t remember giving up goals like that. My problem was playing out from the back, but not having plan what to do next after we escaped the first line of pressure, so we passed back and started over again. It often seemed that we played out from the back for the sake of it. I remember thinking during Chelsea away that if we get the coach in who has plan for the next phase, we… Read more »

Do we know what this means for Fran Stenson? By all reports, she’s a very promising young keeper and I’d be very sorry to lose her. Could she go on loan to another WSL team?

I thought the title said “Leah Williamson extends Arsenal contract”, I should have read that more slowly.

I read Willian. My poor heart.

Fran Stenson, Ruby Mace. These are the players I’d like to be hearing more about.
No news on Leah Williamson I’d guess means no manager appointment yet. Can this really be in the hands of Edu and Venkatesham? Oh dear!

Yeah we wanted to read that they were going to play in the first team not that we had allowed them to go to Man City (in the case of Ruby who knows what is happening with Fran?)
How long before the exodus to Turin?

I just want to say. Its a lot more enjoyable following the women’s team than it is the men’s.

Less drama. More about football and the enjoyment of the sport instead of superficial drama