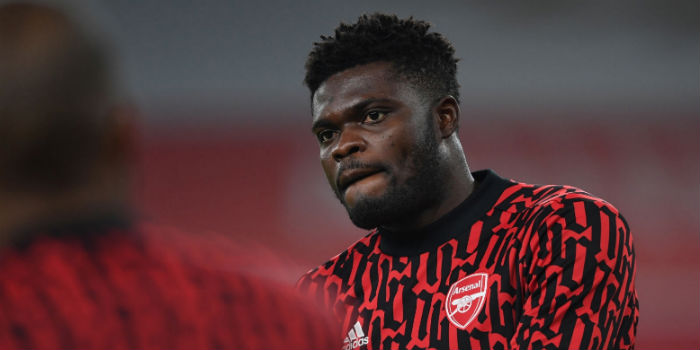 Arsenal have confirmed that Thomas Partey will wear the number 5 shirt from now on.

The Ghanaian took the number 18 shirt when he joined the club last summer but has been hankering after a switch since Sokratis vacated his preferred number in January.

Despite it usually being occupied by a defender, Partey has sported 5 for Mallorca and Atletico Madrid in the past and continues to wear the number at international level.

“I like the No 5 because it’s one of the most important numbers in the team and it is also a lucky number for me,” he told Arsenal.com.

“It’s the number I’ve worn for the past few years, so for me it’s one of the best numbers.”

Arteta: Partey has to be the boss

Joking aside, I think Partey has a real make or break season ahead. He has shown flashes of pure brilliance but he has also put in some very, dare I say it, Arsenal performances. Sloppy passing, errors which have led to dangerous situations, poor game management… It has taken players like Rodri and Fabinho a little while to settle so this last season was always going to be somewhat transitional. But if this team stands any chance of serious progression, we need Partey to be world class. We can’t afford that kind of money for him to be anything else… Read more »

It is difficult to consistently play well in a poor team, no matter how good you are.
If we get our signings right, you’ll see the Partey that made us part with €50m for.

Will we? I have high hopes for Thomas but also some concerns. Fingers crossed he can deliver for us

Great post. We saw so many disappointing performances from Thomas last season. If we are going to do anything this season then he’ll need to turn up more often.

I think it’s a little harsh on him, but only a little.

only major injury in his career, first time at a new club + clubs issues.

I think part of the issue with him, injuries aside, is around his role in the team. At Atletico, as far as I’m aware, he was mostly a purely destructive midfielder, more Gilberto Silva than Vieira. But here he’s being played in more of a box-to-box role, with Xhaka holding his position more on the left hand side, and I’m not convinced it suits him. So one way for him to improve would be to simplify his performances, focusing more of his game on winning the ball back and giving it to more creative players.

Partey did make driving runs for Atletico, but the team was set up for rapid transitions and sudden driving runs. He’ll find his rhythm as soon as he knows what’s supposed to happen up front – there’s no support for him when he pops up. We need a striker who can hold the ball or pull defenders away for Partey and others to do more near the box.

Not unlikely given that he has been wearing number 18 which meant he was following in the footsteps of Hillier, Morrow, Grimandi, Cygan, Silvestre, Squillaci and Nacho

I’m 100% willing to subscribe to this theory. Operating on pure optimism right now until pre-season kicks off

Just about to post the same, but you beat me to it.

Correct, and O’Leary stuck with the 5 while no 6 was being passed to Tommy Caton, Chris Whyte and eventually Tony Adams.

Was clear from minute 1. Hopefully he becomes as good as a certain CM wearing Nr. 4. Or the current wearer acutally plays a game for Arsenal.

Gervinho did that all the time from 3 yards out…

It’s closer than the 18 meters his been hitting – I support making that number smaller. Looking forward to negative numbers being sported in the near future.

he’s got number 5, now give him a world class number 8 and watch him eat this league up.

I would like to see Renato Sanches next to him.

He’s young and has power in his game.

Don’t know why but I think they would be great together.

Secretly he changed his number because 5ive is his favourite band.

Get on up when you’re down
Granit Xhakas no longer around
I know it’s not much, but it’s okay
A one man midfield of Thomas Partey

Coat. Coat? Anyone seen me coat…?

When players talk about squad numbers, all I hear is Spinal Tap.

If he’s half the man Ray Parlour was and has the engine of Kolo Habib Toure, I’ll take it. Let the actual Partey begin!

Switch to playing a bit more consistently as well and it’ll all be complete.

Maybe he said ‘give me 5’ but had to wait due to social distancing.

Ultimate Partey has been unlocked.

Wild idea. Ben White could be one of Partey’s new midfield partners IF Arteta wills it (in some situations).

I’d rather sign someone who’s played in the middle all his life. Thank you

Hmmm… 5 is a centre back’s number. This doesn’t sit with me aesthetically. Still, it’s not as heinous as Gallas wearing 10. Nothing is as bad as that.

I think it’s unfortunate that the standard numbering system is pretty much dead and gone. I understand why with squad size etc. but nothing better than a team lining up 1-11

Fun fact, in latin america, no. 5 is traditionally the defensive midfielder, CBs are usually 4 and 3, LB is 6. Not that it matters ’cause he’s Ghanian and plays in England, but it’s interesting

Oh, and I agree. Gallas 10 was just wrong

He should be wearing the No. 4 shirt, but hey ho, shirts are all over the place these days. If it makes him happy and he plays better, who am I to argue.