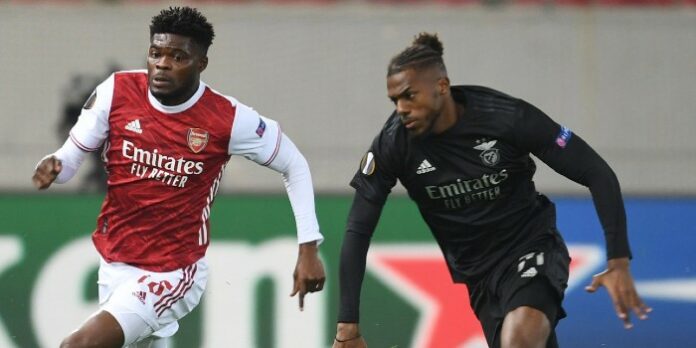 Arsenal are targeting Benfica’s Nuno Tavares as Mikel Arteta looks to reinforce the left-back position ahead of the new season.

According to various reports, the 21-year-old is set to cost the Gunners €10 million and will be offered a five-year deal.

Even though Kieran Tierney has committed his long-term future to the Emirates, finding a suitable understudy has been made a priority with Sead Kolasinac likely to leave the club on a permanent basis this summer.

Full story as Arsenal open talks over Nuno Tavares, nothing agreed yet, but deal of around £7m being discussed 👇https://t.co/xNBGev6bYL

The Gunners opted not to replace the Bosnian when he was loaned to former club Schalke in January. It was a decision that would later cause a headache when Tierney picked up an untimely injury and Arteta shuffled his pack to accommodate Granit Xhaka in his place.

Having sniffed around underwhelming options like Ryan Bertrand and Patrick van Aanholt, it’s certainly welcome that we’re shunning experience in favour of youth.

Standing at 6ft tall and with 41 appearances to his name at the Estadio da Luz, Tavares looks an interesting prospect. We’ll be curious to see how quickly this situation moves.

The majority of Arsenal’s first team are due back at London Colney in 10 days time and Arteta has repeatedly said he’d love to get his transfer business done as early as possible. Bids for Brighton’s Ben White and Anderlecht’s Albert Lokonga have also been tabled.

This is the kind of deal I can get behind

I came on here to say the same thing. Any interesting deal for a guy with just as much 1st league, 1st team experience as Ben White for a fraction of the price in a position on need. He’s obviously not as good as White, but 7x less in price (potentially) and bags of potential without the baggage of an enormous price tag.

I really hope we don’t go and drop 50M squids on Ben White, not in the least that the deal would smell a bit fishy after that anyway…

Indeed ! As the piece says – “ underwhelming options like Ryan Bertrand and Patrick van Aanholt” – we’ve spent far too much time and money on the latter type of player, these last five years.

We need some forward thinking and to aim for a lower demographic profile – age wise. I know nothing about the guy. But he’s clearly not a Man U/Chelsea cast off, looking for a big final pay day.

The same can be said of White, if that comes off.

Signing white should not be a priority, sounds more like luxury to me in current scenario. LB is totally different to that.

I really hope we dun sell ESR to fund this fella and Albert Sambi Lokonga.

Havent heard about him, havent seen him, so can’t judge him. Welcome Tavares

Except they would still judge him.

The same thing we said about Martinelli……Get in mate!!!

Love the look of this chap!
Good news

More of an Aldi man.

Welcome back, Johnny. Been too serious lately.

Both are attacking left backs but defo not like for like.. Tierney is Scottish, 23 and likes plastic bags.. Tavares is Portuguese, 21 and will only use paper bags as its far more biodegradable.

Lots of transfer stories leaking out today. It’s almost like its close to a new kit launch…

Yeah, Ramsdale, Muldur and Taveres are going to cause a stampede for name and number printing.

Another day, another player “linked with Arsenal”.

This has to be up there with the silliest of silly seasons for Arsenal.

Arteta and Edu had another late night binge over the weekend. Edu brings his laptop round to Mikel’s and looks up players on stat DNA. He shouts out players with promising “minutes between fuck ups” stats to Arteta who looks for 6 min compilations on YouTube. Having both agreed that the player in question is the best in the world and raving out to the supplementary unlicensed euro beats, they ring up the chairman in the early hours after one too many glasses of creme de menthe and make derisory offer of less than half the market value, to paid… Read more »

Does Sokratis shit in the woods?

He enjoys it. And he’ll happily snatch up a woodland critter for clean up.

Well he wasn’t in the starting 11 the two times we played Benfica in February. And Benfica are letting him go for only 7 mil. So certainly not on the Joao Felix level of hype, but more like a low-risk investment for the future.

Never fkn heard of him. Sigh.

The price seems right. Its curious though because the knock on him seems to be his ungraceful handling of being the second choice left back at Benfica which is particularly odd as he’d be the clear second choice behind Tierney on a team where Arteta has a history of punishing immaturity despite talent.

And yes periods and commas are for Sp*rs fans!

Transfermarkt says he can play on the right too. I wonder if that’s where Arteta plans to play him.

That would be a sight to see but I doubt it, even if he has a decent weaker foot. Left footed right-backs are a unicorn in football.

I think the last leftie to start multiple games at RB for Arsenal was Nigel Winterburn (only a few games). In general, the only left-footer I can think who played predominantly at RB was Gotoku Sakai when he was in the Bundesliga and he was very ambipedal anyway.

I know nothing about this guy. Fingers crossed. Also at least he is not someone hoping for a cosy 3 years to retirement.

What is happening with kola and willian?

We’re paying them crazy salaries which nobody else is willing to.

Work out the rest.

He’d be the sweetest song that I could sing…
Oh Baby!
Taxi!!!

Really? Was sure Tavares sung “you to me are everything”. It only takes a minute to get it wrong I guess….

This piece of business has an aura of Gael Clichy to it who Wenger signed at 18 to be second choice left-back to 23 year old Cole. Investment signing which turned out to be good business.

Presumably this transfer would spell the end for Kolasinac, Maitland-Niles, and maybe even Cedric.

This bloke with the dodgy peroxide playing for Switzerland looks a world beater. Reckon he’s gonna get himself sent off though. We should sign him

Beat me to it! I guess he’s increased his value by a few million.

We should sign him before he gets sent off?

Never heard of him but his age profile and having some experience tick the right boxes. Here’s hoping he’s a gem. None of the players we’ve been linked with have been really exciting. to me but then I haven’t felt my excitement at a signing has really been met since Alexis Sanchez. Tierney has been great but I wasn’t super excited at the time, just pleased. I was kind of up for us signing Neves and Onana but those links seem to have died off. I would assume wherever Nuno goes Neves may follow. Seems we’re being asked for extortionate… Read more »

Let’s sign that Xhaka guy, he was incredible against the world champions, took on Pogba and Kante single-handed, and will bring the leadership we need in the team!

Surely he is going to Real, 1 good tournament game and off..if only

Edu gets three of these deals done before preseason starts… Wow! 🤌

Anything for Harry Kane retiring with an empty cabinet.

I thought this was a good idea until I saw the video of his dogs licking his open mouth, disgusting. No thanks, he’s a weirdo.

I suppose they’ll also be able to lick their own arseholes to take the taste away, so it’s not all bad.

I’ve heard he doesn’t even go to Sunday mass. What has the world come to!

Great deal and to be understudy to KT is a great place to be. You’ll learn how to become ot best leftback lwb in the world… and will get to play plenty of cup matches and premier league matches when he’s injured……

Feels like an old-skool Wenger signing. Would be happy to go down that route again.

Not to be negative but I have a Portuguese friend who is a lifelong Benfica supporter and he said they would have “driven him to the airport for €1M”. His words were “bad defending and the worst crosser”. He did offer the positive that he is young and may get better with time.