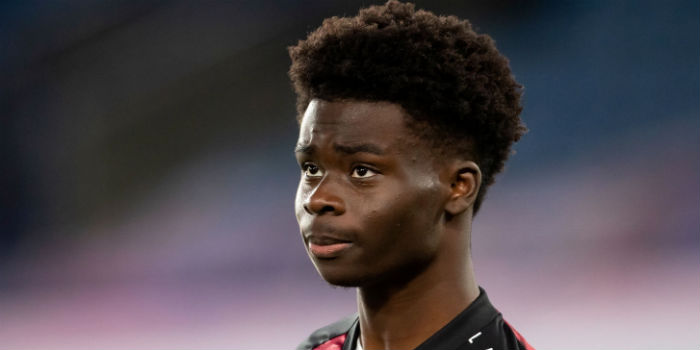 Bukayo Saka’s fine form for Arsenal has been recognised by his peers with a nomination for PFA Young Player of the Year.

The versatile 19-year-old scored 7 goals and made 10 assists in his 46 appearances for the Gunners and was arguably the club’s most consistent performer throughout a difficult season.

Handed his England debut at the tail-end of last year, it was also confirmed yesterday that our academy graduate will be part of Gareth Southgate’s squad for this summer’s European Championships.

Not that you care so much, but Bruno Fernandes, ex-Gunner Harry Kane, Ilkay Gundogan, Kevin De Bruyne, Phil Foden and Ruben Dias made the cut for the Players’ Player of the Year award.

Congratulations! Have a feeling Saka’s going to have a bigger season with us yet 🎉

Shame for them that he’s a Citeh player now…. ah…. hang on… that’s next week’s exciting sp*rs news I’m looking at.

If they bring in Conte, and cash in on Kane, those jerks might actually win something. I don’t like the thought of it …

They’ll have to win something some day, I suppose. But Gareth Bale money didn’t buy them any silverware. I doubt they’ll improve the team by selling Kane.

With Conte, you invest or he is gone so they’re going to invest. Lukaku might very well follow him.
Every club is improving but us, all we have achieved so far is that our bunch of entitled sacked a long-serving academy manager. This is not good enough in my humble opinion.

Considering the opposition who will be in the Conference League, it would take some effort for them not to win it.

I don’t understand why UEFA didn’t use that competition as an excuse to give the bigger leagues an extra European place, rather than reducing the number of teams that go into the Europa League.

I’ve just realised that Mourinho’s Roma will most likely be in the competition, so it’ll probably be the Spursiest thing ever when they lose to them.

I hate all Spuds’ players, but when they leave (especially if they come to us) I suddenly start liking them. I doubt that will happen with Kane.

If Saka doesn’t win, we riot

A Gorilla
Reply to  Steve

Let’s start the preparation for riot already because, with names on the list, he is definitely not going to win it.

With the covid pandemic Steve is just having riot withdrawals.

Ruben Dias is on both the Player of the Year and Young Player shortlists. Kinda tough to argue that Saka (or anyone else) was more influential than him this season. On the other hand, I think the award should be limited to people who actually look like kids. The Leeds keeper, Meslier, and maybe Foden would be Saka’a only serious competition.

Kostas
Reply to  A Different George

…and maybe that spoiled brat from Evertons midfield

Phil Foden is the best young player in the country right now. He will win that award hands down. Depressing times right now if your an Arsenal fan, isn’t it? The Chavs have won their second Champions League in the same season that we failed to even qualify for any European competition. Let’s be honest: we are now the second biggest team in London. We haven’t won the title in the best part of 20 years and are now a mid-table side. The Chavs have won everything that matters at least twice in the same period. The combination of the… Read more »

Saka is better than Mount. At times this season he’s been our best right winger, best left winger and best left wing-back; on occasion all 3 in the same match

Foden will win this one though (and Dias will get the player of the season award) by virtue of Man City winning the league. I’m sure Saka would have been right up there too if we had won any major trophies.

Great to see him get his first goal for England. Well done lad.

I know it’s unpopular but I think Mount is more important to Chelsea than Foden is to City and that makes him more valuable and better.

But what do I know! I just hope somehow Saka wins.

Chelsea splashed obscene amounts of money they did not earn to win everything they won since 2005. In my thinking it doesn’t really count and I don’t admire it or acknowledge it as success on any level. Same with Man City. I do admire and acknowledge the trophy success at Man Utd (grudgingly), Liverpool, Leicester, Wigan, Portsmouth etc. and of course The Arsenal in that same period. It was achieved on sporting merit alone.

The essential difference between us and Chelsea is the culture. Chelsea have a culture of “first is first and second is nowhere” while our culture is “fourth is a trophy”. Stan has absolutely no ambition except to make money.

Well, first that’s leaving out a lot of other things, including the literally dozens of Chelsea loanees. This is a club that can afford to give up on De Bruyne, on Salah, on Lukaku, and just replace them with others. Second–has Pepe not actually been been better than Werner? In fact, much better. Has Ziyech, who mostly sits on the bench, been better than Partey, with all his inconsistencies? What they have, most of all, is the same as Man City–incredible depth. And that, simply, is a function of money.

Did Tuchel cost an obscene amount of money? I don’t see much difference in the players.

Lampard was already a more experienced manager than Arteta. He did great at Derby and better than Arteta in the league. Chelsea still improved on him and brought Tuchel in. He knew exactly how to deal with Pep’s tactics. They won the CL even with Werner misfiring.

Well, they won in large part because of one of the great performances by one of the greatest players (at his position) I have ever seen, Kante. And because City lost their (maybe the league’s) best player, De Bruyne. Most of the “Tuchel outsmarted Guardiola” or “Guardiola overthought it” stuff is drivel–neither side had a tactical advantage that I could see.

Saka is great and deserves this honour. But I actually think that ESR is at least as good. I hope Arteta builds the team around them.

Saka was phenomenal; but to say “he carried the team by himself for a while” is hyperbolic.

This is one thing the US sports have got right IMO. Most Valuable Player takes into account those around you. Easy to be good in City’s team (hence multiple nominations), extremely difficult in Arsenals considering how bad the start of the season was, yet Saka was incredible throughout.

The award should go to Joe Willock on that basis, then.

I cannot argue with that. I have plenty of friends who are fans of the toon who love him

Or Grealish–compare Villa with and without him.

Fantastic achievement and testament to our academy and young player development. Should be a worthwhile experience at least, so long as he comes out in one piece. Also interesting that all 6 nominees for young player of the year are all English, not sure when that’s happened before.

Where’s the link to vote, I’ve voted and got all my mates to vote, we can do this!

He’s our bright spot. Clearly our best player this season, and our most valuable asset. They’ll probably still give it to Foden even though he played on a far better team…

I still have to pinch myself that we have him and ESR and that they are only going to get better.

Well done Bukayo. Well deserved. One of the shining lights in a turd of a season. He’s going to be one hell of a player.

…and, of course, he scores the winner for England yesterday.

The kid seems to have footballing gold dust sprinkled about him.

Go on boy, do your thing…

A Different George
Reply to  MojoWillneny

He scored playing what looked like left wing, then was moved to the right side where he had to defend much more (to compensate for the score effect and Alexander-Arnold’s deficiencies). I’m thinking that Southgate did this purposely to see how Saka would perform. I think he starts in the Euros.