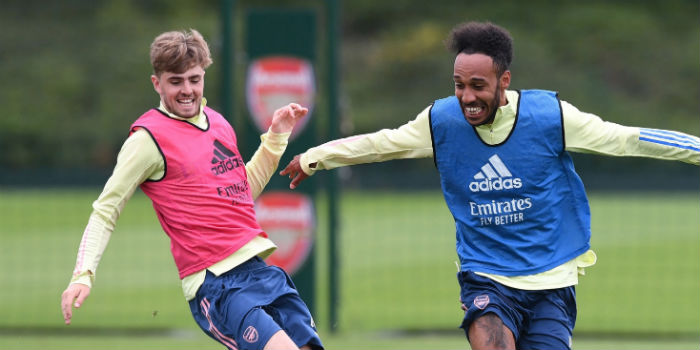 The 2019/20 season went superbly for Zak Swanson, with the right-back being referred to by then U23s boss Steve Bould as one of the club’s standout performers at that level.

This season, however, has been one of much frustration for the hard-working prospect.

Swanson was sent on loan to Dutch side MVV Maastricht, which appeared a rather unusual choice of destination despite Arsenal having previously sent players there. While many of Swanson’s Arsenal colleagues were adapting to senior football in League One or League Two, he found himself in a different country and having to learn very quickly.

Matters certainly didn’t go to plan for Swanson as he was restricted to just three appearances for Maastricht before being recalled early from his loan spell.

The youngster’s frustration was compounded by the fact that he suffered a serious injury which meant that he wasn’t able to play at all in the remainder of the campaign and couldn’t go on loan in January.

Now closing in on a return to full fitness, Swanson is looking to make up for lost time. The 20-year-old is set to be loaned out again next season, with an English club the most likely destination this time.

Swanson will be hoping for better luck on the injury front and he can draw inspiration from Daniel Ballard, whose spell with Swindon Town ended abruptly before he bounced back in superb style this season to help Blackpool earn promotion from the Championship.

One concern for Swanson is that there is a danger that he could eventually be overtaken by some of the other young right-backs on the production line, with Daniel Oyegoke, Brooke Norton-Cuffy and Ryan Alebiosu having made good progress.

For now, though, Swanson just needs to focus on his own development and hope that he can get a regular run of games out on loan.

With no European football next season, I would have thought that the young players have a far less chance to break into the first team. And with less fixture congestion, less fatigue, less travel, Arteta can well afford to play stronger line-ups in the domestic cups – again reducing the chance of a youth getting minutes.

More youngsters than ever will surely be sent out on loan.

This is why I don’t want Edu buying a bunch of average talent. He needs to get 2 CM, 1 RB and a backup LB. The first 3 should be elite level guys. Doig would be an ideal backup LB. Let the Academy provide depth. Sell, sell, sell. The wages should be down 40-50mil this year as well.

Did he also play Connor in Normal People?

I think a RB can make it pretty easily into the first team setup the next few years (not sure for how long). But agewise, I can’t really see it beeing Swanson. I hope he has a good loan for his own career and for a bit of money for Arsenal. Will be interesting how the likes of Medley, Bola, Sheaf will departure. I hope it will be for the gain of Arsenal.

Teta's cult of personality
Reply to  Viv The 🐐

Am I the only one who thinks Medley would be better suited to the LB position?

I know the inclination is to stick a 6’5″ player in the middle but he looked more comfortable playing on the wing when I’ve watched him. He certainly has the speed and dribbling ability to be a fullback

I wonder if his nickname is ‘Gloria’….?

His dad Joe was a fantastic prospect until the fateful accident that cost him the use of his legs.
Giggity!!

“Blackpool earn promotion from the Championship.”
Should be… ‘to the championship’. They won league one playoff

I wonder if Jeorge Bird would reply back, but, are there any prospects from the youth team player(s) that could potentially fill the RB position? Does Arteta have his eye on someone for the first team next season?

I wonder if Daniel Ballard will go off on another loan this coming season given how well he’s done with Blackpool. Read a great article about Ballards football career by Charles Watts but with some many CBs at the club and the interest in Ben White, is his time at Arsenal done?