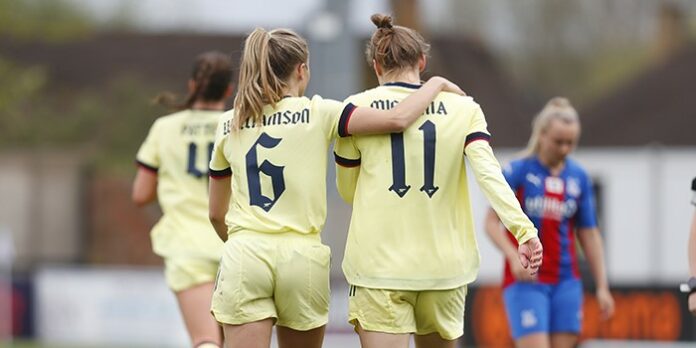 Sweden 4 – 2 Australia (Saitama Stadium)
Caitlin Foord and Steph Catley started for Australia against Sweden in Group G. Goalkeeper Lydia Williams was surprisingly dropped to the bench in a topsy turby game that saw Fridolino Rolfo give Sweden the lead, only for Sam Kerr to equalise soon afterwards. Kerr headed a Caitlin Foord cross home from close range to give the Matildas the lead early in the second half, but goals from Lina Hurtig, Rolfo and Stenius Blackstenius gave Sweden a 4-2 victory. Australia play USA on Tuesday.

Japan 0 – 1 Team GB (Saporro)
Leah Williamson, Nikita Parris and Kim Little all started for Team GB against Japan with Gunners captain Kim Little skippering the side. It was former Arsenal striker Ellen White who again scored for Team GB, guaranteeing them a place in the quarter-finals. Japan surprisingly left Mana Iwabuchi on the bench. GB take on Canada in the final group game, while Japan will play Chile on Tuesday in Group G.

Netherlands 3 – 3 Brazil (Rifu)
Vivianne Miedema started for Netherlands and scored twice in a see-saw encounter with Brazil in Group F. Miedema gave Netherlands the lead with a sumptuous turn and finish in the 3rd minute, before Debinha equalised for Brazil. A Miedema header restored the Dutch lead in the second half, but a Marta penalty and a Ludmilla goal put Brazil in front. Former Arsenal midfielder Dominique Janssen rescued a point for Sarina Wiegman’s team with a thirty yard free-kick into the top corner. Netherlands finish the group with a game against China on Tuesday. Miedema went off just before the end with what looked like a groin injury.

I don’t think Viv could stop scoring if she tried.She’s a machine,programmed to score goals.We need Auba to start being the same again.🤞

Loved the look of Hemp! Little didn’t get the ball enough, but you could see her class each time she did. I don’t think we talk enough about how amazing she is.

Great shift from Leah. Immaculate on the ball as always. And I like the fact that Keets takes her defensive duties seriously.

Deja Vu: the very best players produce their very best performances at the very best tournaments: our own perfect example is Kim Little at the Olympics. I watched the whole game versus host nation Japan & once again she excelled including a superb dribble then pass to Lucy who crossed for Ellen to head in the only goal. Leah and Nikkita also put in top class performances.
Looking like Australia in the QF then (hopefully) the US of A in the semis……..