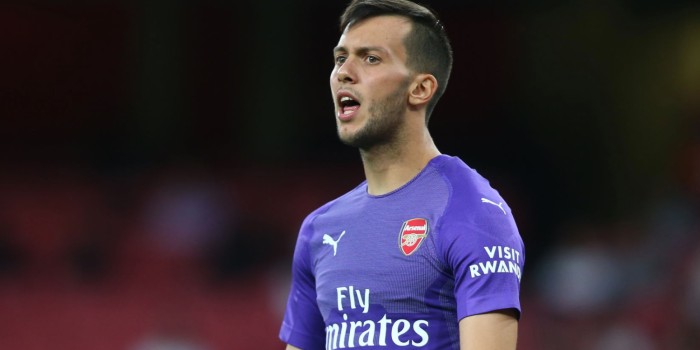 Deyan Iliev’s curious Arsenal career continues with news the Macedonian is returning on loan to SKF Sered; the Slovak side who signed him for the 2019/20 campaign.

The 26-year-old – yep, he’s no spring chicken – joined the Gunners in 2012 and is yet to make a competitive appearance for the Gunners’ first team.

If Iliev stays at Sered for the whole season he will reach the end of his Arsenal contract. Likely that he will leave permanently next summer.

In addition to a season in the Slovak Super League, he’s also spent time with Polish side Jagiellonia and Shrewsbury Town.

According to our resident youth expert, Jeorge Bird, Iliev’s contract, which he last signed in July 2018, runs out next summer so it’s very likely he’ll leave the club after a decade.

Get that man a testimonial.

Shit, even the just about good enough for a league team players are running down their contracts.

Surely he’s not going to leave before his testimonial…

Balls. Just seen that joke made far better by Andrew.

Well, in my humble opinion, you are right to feel silly, if you didn’t read the full article before commenting…
In any case, Hats off for the joke :p

I think we should get him a dozen or so Prem matches, then swap him for Grealish. I know that looks unlikely because how could he start without cutting back on the minutes for Saka, Pepe, and Smith Rowe, but we can live with that.

I fail to see why portly Gooner’s entirely correct analysis gets the thumbs down ?

It is quite mind boggling, that the guy has been kept in the Arsenal ‘waiting room’ for almost a decade. Maybe he likes it there ?

But as a comment on ‘squad management” – as PG has said – it’s frankly damning.

I know little about this Garlick fellow ; but I really hope that he starts to get a grip on this in the coming 18 months. Because it’s palpably obvious that no one else has in the last six or more years.

The internet claims he’s on almost six grand a week. No wonder he likes the waiting room. I’d love it unconditionally for half of that.

Ah, then it must be true.

Surely we could have found a permanent home for him and taken him off the wage bill some time ago if it’s been clear he won’t make it?

You gotta love the faux outrage over a contractual and player development situation to which none of us are party or cared about before this piece.

Expert squad management from Arsenal, he says. lol. How will Arsenal–the only club ever to have made a bit of a hash of a goalkeeper’s development–recover from this unmitigated debacle? Concern!

What is it about our club that we tend to attract the most amount of outraged fans? Get out while you can, Joel!

PG’s point was that this is typical of Arsenal’s mismanagement of the squad, over the a number of years. The money involved here, was comparatively small.

The Sanchez/Miktaryan/Ozil fiasco, was north of £100 million. People can’t have it both ways.

They can’t react with indignation if the squad management – over a number of years and different Managers – is criticised. And then whinge when – as a consequence – we finish 8th twice.

There is an obvious – blindingly obvious – link between the two.

He had nearly two years out because of a knee injury. And I believe Arsenal renewed his contract in the middle of those two years, class.

This is arsenal. A classy team 2 the core. Wish they handled the mascot n the other 50+ backroom staff better

That’s a nice story, but not accurate.

I be-Iliev he needs to keep working hard Deyan dayout.

Take your upvote and get out.

worth giving him a game or two to do an Emi?

What a farce! No first team games for us and still being loaned out at 26! Come on Arsenal, put him out of his misery – release him from his contract now and let’s try not to repeat this kind of nonsense in future.

Must be close to our longest serving player?

If his contract is up at the end of the season, I can’t see that arsenal gain any benefit from loaning him out rather than selling him off permanently. Unless I’m missing something this seems like a failure from Arsenal to cash in, even if not massive amounts

Yes yes all of this never happens on FM, we are the farcenal (sarcasm)