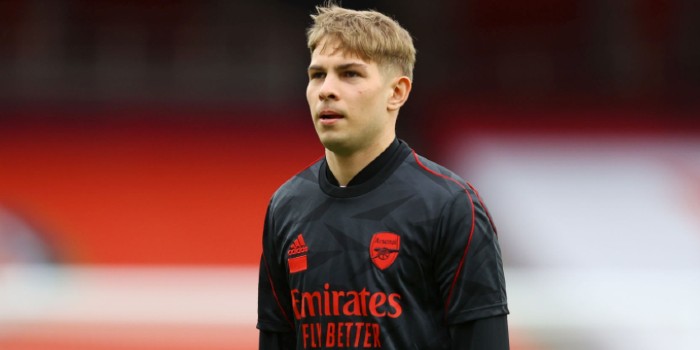 Arsenal have confirmed that Emile Smith Rowe has signed a new long-term contract at the club.

The 20-year-old academy graduate has been in negotiations with the Gunners hierarchy over a new deal for several months and was always expected to commit his future to the club despite Aston Villa twice tabling offers for his services this summer.

Smith Rowe became a mainstay of Mikel Arteta’s first team last season making 34 appearances despite being sidelined for the opening three months due to injury. Having sold Mesut Ozil and with Martin Odegaard returning to Real Madrid following his loan spell, it’s expected that the youngster will start the new campaign as the club’s first-choice number 10.

After tying down Bukayo Saka, Gabriel Martinelli and Kieran Tierney to new deals and with Albert Lokonga and Nuno Tavares joining in recent weeks, Arsenal have a clear core of young players around which to build for the future. It bodes well.

Congratulations to Emile, here’s hoping he goes from strength to strength.

It really is. I was getting worried about this. Then again, I’m always worried where Arsenal is concerned

I am worried we’re not getting any arrivais in the CF department.

Good times for a change.

See, the luck I’ve had can make A ston Villa turn sad

So glad we’ve signed This Charming Man, the Smith! We’d be going Nowhere Fast without him.
You’ve Got Everything Now, Emile.

Great news! The future is bright for him!

He grew up in Potters Bar (I only know becuase he was in the same class at school as my cousin) so surely more the Potters Bar Neymar!

Chills with that reveal – here’s to hoping he has luck on his side to stay healthy, and keep that #10 on his back for a long time to come

Teh
Reply to  Cultured Determination

If Willian is involved, it should be 50m.

The Beast
Reply to  Cultured Determination

Judging from their last offer for ESR, surely Willian + a signed pair of calvin klein’s from Ljungberg will do the trick?

Super happy with this! Excited to get going with Saka 7 and Smith Rowe 10 in the starting lineup 🙂

Definitely love them both, world-class potential. But I hope that the club doesn’t put too much pressure on them and they sign an established player in that position. Easy to forget they are 20 years old. Add to that Balogun and Martinelli are about the same age and Willian shudder we really need some firepower.

I understand the reservations fans have and their wish to see our young guns protected but Anelka was only 19/20 when he hit his straps and Vieira was only 21 and he did ok.

Not really protected, I just think we need another player who can play AM and Inside forward who isn’t Willian.

Yeah, I get that, but Saka has the ability to drop into the No.10 slot if needs be, unfortunately I’m afraid that we’re probably gonna have the pleasure of Willian for another year so be prepared for that. Yeah another No.10 would be nice all the same, shame that Reiss Nelson isn’t trusted in that position…

It hasn’t done any harm to Mbappe with 243 appearances by 22. I recall Fowler was read hot in his teens and many more examples.

People worry because of the likes of Wilshere, but his injuries were a lot to do with his habit of letting the ball go so late and being so brave.

So then you block the path of esr? How about giving him the role and finding a young replacement for him? With such thinking we are losing great young players such as saliba, nelson, previously gnabry…

competing for spots in our front 4 (or front 3 if we go for a 433) are laca, auba, pepe, saka, esr, martinelli, balogun, and willian – plus there’s still nelson and nketiah whose status we need to resolve. to me that seems like enough to be going on with, unless we shift willian, nelson, and nketiah. if we can (a) work out a midfield pairing that is both defensively sound and capable of advancing the ball, i.e. partey and _______ (i’d be willing to try willock there, or elneny, or lokonga, or get in someone new) and (b) actually… Read more »

I’m glad our homegrown boy is wearing No. 10. I think Martinelli will probably wear 11 and the new MF signing will wear 8.
I am still curious as to why Aston Villa for once thought Arsenal will sell him

Tankard Gooner
Reply to  Me from Here

That was just a case of them getting too big for their pants too soon. Hope they become relegation fodder this season.

We owe them a complete thrashing or two.

Seriously. And though I still love Emi, I think it would be best for our fanbase to see us put a handful behind him and move on.

Nothing less than a 6 points against them is acceptable with 6 points just for their insolence. Hopefully with ESR on the scoresheet in one of the games.

Them, City and Burnley are the clubs Arteta hasn’t beaten in the league yet.

I don’t know what everyone thinks about signing Madison for 60-70m. In my own opinion, given his injury record, I won’t do that. I will rather that we sign Aouar and Sabitzer combined for like half of that. I don’t think their combined wage will be more rumored 220k for Madison. Aouar is 23 and Sabitzer is 27. Both give us experience, youth, and depth.

Torterrier
Reply to  Me from Here

Maddison is overrated and I hate his face so I am all for anyone else signing for Arsenal. It’s going to be bad enough looking at Ben White all season.

Merlin’s Panini
Reply to  Me from Here

I thibk Maddison would be a good signing. He’s a really dynamic player (especially for an English one!) and was in England squads before he got injured. He would add another to the homegrown quota which is never a bad thing.
However, I would also probably prefer Aouar when money is factored into it, although I’ve read there might be a question mark over his attitude.
Whatever happens we definitely need someone to back up/swap with The Smith.

This is great but we know what new contracts do to our players. Hope he is one of the exceptions.

This is great but trust someone to make a sad face

Saka did alright after his new contract.

Well, that came out of nowhere… Nice!

Aston Villa bidding for an Arsenal player we had no intention to sell was the height of disrespect for me… and a pointer to what some midtable teams think of us now.
And some fans feared it could happen.
I will only be satisfied when we thrash Aston Villa like we did in 2014/15
0-3 away, 5-0 at home, and 4-0 in the FA cup final.
Time to put them where they belong.

Good to have ESR tied to a new contract.

The Beast
Reply to  Man Manny

Personally, I couldn’t give a fuck what villa think of us. Never have & I see no reason why I would start now.

Well up for racking up a 12-0 aggregate scoreline on them this season tho.

Merlin’s Panini
Reply to  The Beast

Excellent news. Also, a satisfying combination of knowing this was *likely* going to happen, and relief over it not having gone sideways.

Best news yet this window

Yes, along with Tierney’s contract extension.

Great bit of news. Now time to step up and make the position his own.

Hats off to the player, his family, and the academy. Number 10 at aged 20 🙌 it’s great to see. More of this please.

Wenger would be proud of the current project at AFC.We are really destined for great things in 2-3 years time

He wouldn’t have had the lads fucking about with the thing in a never ending horseshoe though.

That’s got to change. Period.

This is great news, I’m hoping he gets us going next season. Regarding Aston Villa, there must’ve been some contact between ESR reps and them, where there is smoke, and all that.

Well I’m pleased the inevitable has now been announced. Puts a few minds at ease.

Best news of the transfer window. He deserves the No.10 shirt, too.

I just hope that the hierarchy don’t now assume that this gets them off the hook and means that we longer have to bring in a top AM, because we do. That is still a priority requirement.

Was thinking about the type of midfielder we need and can’t help but feel an Aouar type is just what we need rather than a Madison type. I’m interested in seeing how Willock would do in a midfield with Partey and Lokonga. We definitely also need someone to replace Xhaka too.

Brilliant news. He’s probably the most naturally gifted of the players to come through the academy. Felt like by the end of last season, he was just about to push on to the next level. And (fingers crossed), I think his injury issues may be begining to look more like the struggles of a young kid growing into his body. After he came into the side in December, I felt like he played in almost every game, barring 2 or three weeks, for the rest of the season. While it is still early in pre season, he looks much stronger… Read more »