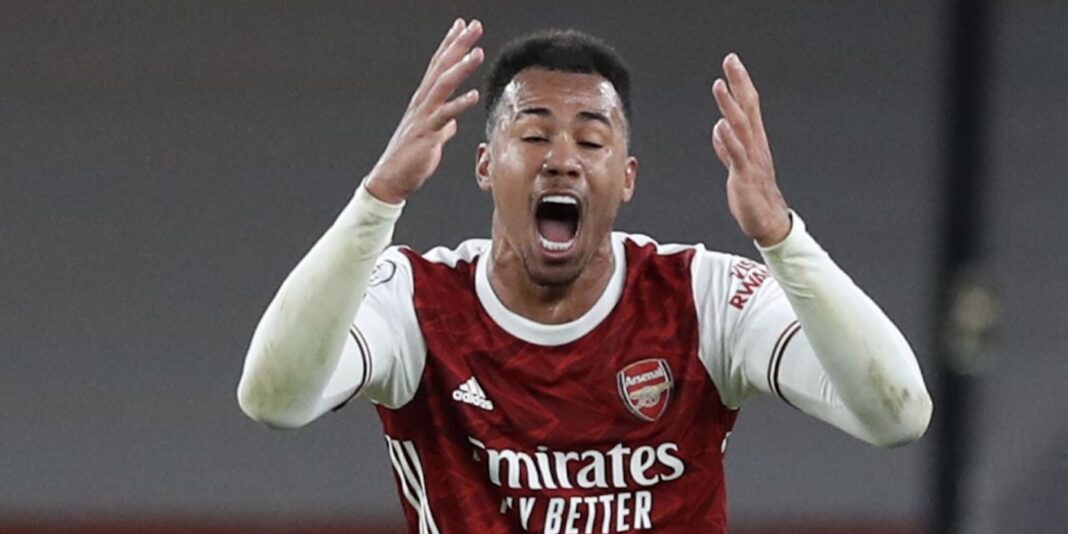 Arsenal defender Gabriel Magalhaes was due to take part in the Olympics football tournament in Tokyo, starting this month, but has been ruled out of the squad because of a knee injury.

The 23 year old has reportedly been suffering with tendinitis in the knee, which is a bit of a worry, and it remains to be seen quite how serious it is.

Brazil’s first game was due to take place on July 22nd, and with the final not until August 7th, it must be sufficiently grave for him not to remain with the squad in case they went that far.

It certainly provides Mikel Arteta with a headache, as the former Lille man’s time away with his country was essentially his pre-season.

With mooted signing Ben White likely to need some time off after being away with England during the European Championships, the Gunners could start the season with just Rob Holding and Pablo Mari available, with Calum Chambers as possible back-up.

With reports that Marseille have moved to sign Brazilian defender Luan Peres from Santos ahead of taking William Saliba on loan, perhaps there’s a need to hang onto the young Frenchman, but until such time as we get more information about Gabriel, it remains to be seen what will happen there.

ugh. Bad news. hope he recovers soon. we don’t have the luxury of bad luck this season.

You know that quote “the more I practice, the luckier I get”? Well, I think it also works in reverse.

We still have Holding, Mari, Chambers & Saliba without even signing anyone.

A Voice in the Noise
Reply to  karl

Yes, a backline of Bellerin/Chambers – Holding – Mari/Saliba – Tierney
should be enough against Brentford in GW 1.
The gameweek after however…

Nainsley Aitland Miles
Reply to  A Voice in the Noise

Hopefully this is a Klopp/Ferguson style of injury where the player makes a suspiciously speedy recovery before that next gameweek.

Read somewhere that Mari might be in the move but guess that was just a cooked up rumour. Think if we buy Ben White he starts the first the game but yes i am like all the others just a hope Saliba is retained and we see him in the defence playing for us though he does make risky passes which when intercepted can cause trouble.

Arteta is probably more likely to play Partey at CB or bring Djourou out of retirement than give Saliba a couple of starts there.

We actually need some players that will take risk. Arteta’s Arsenal can be dull and spend time passing around the acr at the back forever.

Smith Rowe is one of the few positive and progressive players that move forward and worry opposition, so let’s not get hung up on technical security and fall asleep during matches.

GWS and hope this setback is a short one.

With Luiz gone, we’ll need Gabriel to step up this season.

Doors are flying open for Saliba – surely the stars are aligning; one way or another he may just get a chance to make his mark and settle this mess.

Some info from the NHS UK page Tendonitis is when a tendon swells (becomes inflamed) after a tendon injury. It can cause joint pain, stiffness, and affect how a tendon moves. You can treat mild tendon injuries yourself and should feel better within 2 to 3 weeks. Go to a minor injuries unit or a GP if: Your symptoms do not improve within a few weeks You’re in a lot of pain. You think you have ruptured (torn) a tendon. If the pain is sudden and severe, and happened during an accident or activity, you may have ruptured a tendon.… Read more »

I agree with your point – but Tendonitis can become chronic with over-exertion; and as most Arsenal fans remember with Koscielny, it can crop up at the worst possible moments.

What door this does open, is the possibility of keeping an extra CB even if White is added to the fold. I see plenty of opportunities, even with no Europe, to keep everyone happy.

Worse case scenario he develops with some Premier League experience.

Gabriel plays left CB, so Mari would be the natural replacement.

He hasn’t played anyone over an available Saliba, because they never bothered registering him, even when it was not possible to loan him and the EL squad deadline had not passed.

It is mind boggling how it would appear Arteta refuses to give Saliba a fair chànce.Holding,Mari and Chambers are average at best.Cant hurt to throw Saliba in the mix.aaaarrrgggjhh

Because that’s historically exactly how you destroy a young defender? “just throw him in” is such a lazy take. How can you not imagine that the management know something that we don’t? Or that a young player has no right to play for our club, they have to earn it, demand it, to break through. See Saka, his attitude behind the scenes is stellar, he got chances and demanded he get more through his performances. By all accounts, Saliba is turning down a loan to an English team, in favour of a French one. That’s a terrible move, and his… Read more »

I am confused as to why this idea that young defenders/goalkeepers don’t get given chances in the Premier League keeps being repeated. It’s simply just a falsehood and I’ll prove it. In the last 4 seasons, the following defenders/goalkeepers were around Saliba’s age bracket (U20) by the time they were given more than 500 minutes in the Premier League Max Aarons – 3578 mins Trent Alexander Arnold – 3440 mins Islan Meslier – 3250 mins Wesley Fofana – 2265 mins Ethan Ampadu – 2091 mins Pascal Struijk – 2074 mins Joe Gomez – 1900 mins Yan Valery – 1714 mins… Read more »

its the history of the Arsenal

Wow. What bad news. Was really hoping/expecting Gabriel could start the season the way he did last year and sustain that level free of injuries.

Hope it proves to be precautionary more than anything…

I can’t believe Arteta did this to him.

Ha!
Are we sure it isn’t Wenger’s fault?

The Beast
Reply to  Mpls

It was obviously a 2 man inside job by arteta & edu with wenger pulling the strings from a far at illuminati HQ.

To me, the best defender at the club. He has absolutely everything; almost unbeatable one on one, extremely comfortable with the ball at his feet and can pass from the back, fantastic in the air, and has great pace for a defender.

In my opinion one of the best signings for the club over the past 5 years.