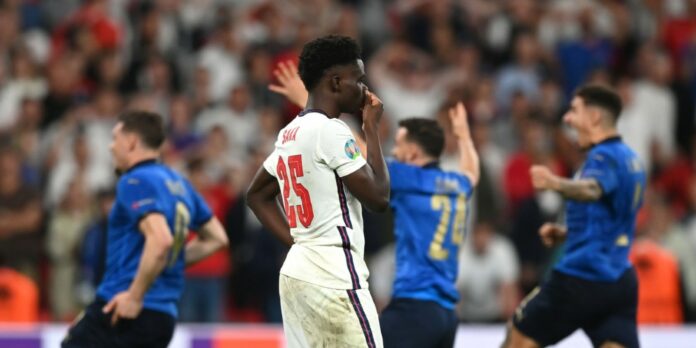 Bukayo Saka may have been subjected to horrific racist abuse in the aftermath of Sunday night’s missed penalty in the Euro 2020 final but Mikel Arteta has been quick to highlight the support that has also flooded in from the football community.

Left in tears when his saved spot-kick confirmed Italy’s victory at Wembley, the 19-year-old, alongside Marcus Rashford and Jadon Sancho, was instantaneously thrust into the media spotlight as the inquest into the defeat began.

As the players were consoled on the pitch, heartwarming messages from supporters, teammates and rivals drowned out the bile that polluted his social media channels.

Speaking to Sky Sports after last night’s pre-season friendly with Hibernian, Arteta confirmed he’d been in contact with the youngster and backed him to bounce back.

“He will be fine. He is such a strong character. He has received a lot of love and support from world football, not only with Arsenal but the national team and all the English fans because he doesn’t deserve anything like [what] he has been through.”

“He has had a phenomenal season,” added the boss. “In football, you want to be part of the greatest, you have to know today, at 19, that you lose more than you win unfortunately in this game and there are no exceptions to that rule.”

In a strongly-worded statement, Arsenal condemned the abuse England’s players had received and doubled down on their calls for social media companies to take more responsibility for policing the content posted on their platforms.

Arteta continued the theme: “Hopefully we can use now to make a strong statement and we have to stop racial abuse on social media and people using social media to hide and put people in really bad places.

“Hopefully the laws will become stronger. I think we are all going to try and make a strong case out of that and hopefully, it can have a big impact because I think it is the moment to put that right.”

Racial abuse is abhorrent, especially for a lad as great as Saka.

The only possible good thing that it gets the w*nkers (including politicians) out in the open so the rest of us can do something.

Hopefully it will die a death sooner than later.

Just one problem here, why try single out the exception as though it makes it worse. Racism is equally terrible for everyone, why do you have to say it is especially for Saka?

Is he not saying that racism is equally terrible for everyone by saying that it is abhorrent? Especially for Saka in this regard is because the article is about him!

Do you really think C.B only believes that we should only, and only defend Saka from racism?

Think about your comment for a bit. It was a little…weird.

He is saying it is abhorrent for everyone, but adding the qualifier about Saka unfortunately does imply that it is especially abhorrent if it is a good guy (and thus less abhorrent if it is about someone not as good). While I by no means am saying this comment is racist, it does have racist implications, and these should be recognised and thought through. Perhaps it is actually your knee jerk reaction of incredulity (toward the idea that people might be racist without meaning to be) that needs to be thought about for a bit.

He’s probably saying it’s especially bad because he’s young and put himself in a hugely brave situation in-front of the whole world. This automatically deserves extra recognition, not extra condemnation as far as I’m concerned.

Maybe, but what he did say – not what he probably said – has the aforementioned implication.

My issue isn’t as much with the comment, but the way the original (justified) query of its subtly racist implications was dismissed by an appeal to the original commenters presumed non-racism.

I think you’re reading too much into it.
It’s an Arsenal forum, we’re obviously going to have his back EXTRA. Not because of other racism is fine, but because he’s our boy and we take extra pain from it.

As others has pointed out, the exception of Saka is in relation to him being our boy in Arsenal. What if the comment was about someone else close to you? Say your friend who experienced a racist insult? Would you not say that “racism is abhorrent, especially for my friend who just experienced it? In that sentence, you are acknowledging that racism is bad for everyone and referring to an example to support your statement. It is a fairly regular judgement. It does not imply a “problem” like Scwibble postulates. Racism is abhorrent, is equally bad for our boy as… Read more »

When Lady Diana died in an accident, a friend on mine kept on saying and repeating”especially the way she was beautiful”. Awkward but there is nothing to it.

‘We love you Saka, We do!
‘Cos your Arsenal through and through!’ … as well as being an incredibly talented, intelligent, likeable and grounded young man.

Catchy. How do we work that last part into the song? Or do we just ramble it?

Skill, Intelligence, Courage – Saka has everything you need to be successful. Hope he’s our number 7 for a long long time

I’m so excited to see Saka and ESR play together in the forthcoming season!

I love going back and reading articles like this – https://arseblog.news/2018/08/bukayo-saka-impressing-for-arsenal-u23s/

Racist abuse is utterly despicable. That goes without saying. It’s worth noting that 70% of it comes from overseas, according to Sanjay Bhandari, chairman of Kick It Out. In addition, of the 105 accounts on Instagram that sent racist abuse to English players, BBC Newsnight found that of the 64 accounts that had their locations identified, only 5 were from the UK. So before we all get carried away chastising English fans, we should note that most of it is coming from other countries. Yes, there are still racist idiots in the UK, but they are very much the minority… Read more »

Yeah I suspected as much. At least one silver-lining is that the accounts located in the UK fall under British jurisdiction, so some can be prosecuted directly. I’ve said previously that these abusive posts are likely premeditated. I don’t know if the comments are still there but when I checked Saka’s and Rashford’s Instagram pages… I did manage to see some English, Italian, Dutch and Bulgarian users spamming slurs. The latter didn’t even have any stake in the outcome of the final. Just mob mentality really. Most of the accounts I checked were newly created with no info, but some… Read more »

The Premier League has been a global phenomenon for a long time so this breakdown makes sense – although doesn’t alter the problem at all. I do wonder why many people seem to have a problem with this information though, it’s not excusing it, just an attempt to analyze it. We really have to use the groundswell of this moment to put pressure on social media companies to better manage their platforms.

People prefer comforting, simplistic solutions and explanations to complicated ones. Although I guess that analysis is in itself simplistic.

I take the thumbs down on spartan’s comment to mean that some might not wish to reflect on their own fan communities like how England fans are having to reflect. Perhaps preconceptions are getting in the way of the full picture. During the Hungary games (no pun intended), I noticed large numbers of “Blackshirts” and signals within the Hungarian crowd. Only German fans and media really made a big deal about it. I guess everyone else was too caught up in the underdog story and the fantastic football the Hungary team was playing. At the very least, it highlights why… Read more »

The idiots responsible for the racism the other night need to be flushed out – of that there is no doubt and every sane decent person is and/or should be in agreement with.

There is, however, a certain amount of Anglophobia being expressed on here and other social media – blaming an entire nation for the behaviour of a few idiots.

Which, in itself, is racist and just as unacceptable.

I guess the Marcus Rashford mural in his home town was vandalised by foreigners too? 😉

Thank god foreigners, where would we put the blame for all issues without them?

That’s a straw man argument. My comment related to about social media. Home grown idiots most likely are responsible for the vandalism.

I’ve never understood why saved penalties are called “misses”. The lad did his job and hit the target. It’s just the keeper also did his job and saved it. Can’t really ask much more than that.

Yep, also if he dives the other way they say good penalty, sent the keeper the wrong way. The second he makes a save it’s a bad penalty.

Love Saka, fuck the racists…..England don’t deserve to win anything with these morons smashing the place up, intimidating families at games and cowardly posting abuse. On another subject, how did Rekik do last night, i didn’t see it?

What is there to say that hasn’t already been said? The disgusting racist abuse that our wonderful Saka along with Rashford and Sancho, have been subjected to is by no means unique to England or indeed to Western countries. But England’s legacy as a colonial power puts it in the spotlight, and rightly so. It’s incredible how widespread coverage of this has been in Africa, the Middle East and India. I hope Saka looks at this national and international support and comes out stronger. I’m sure he will.