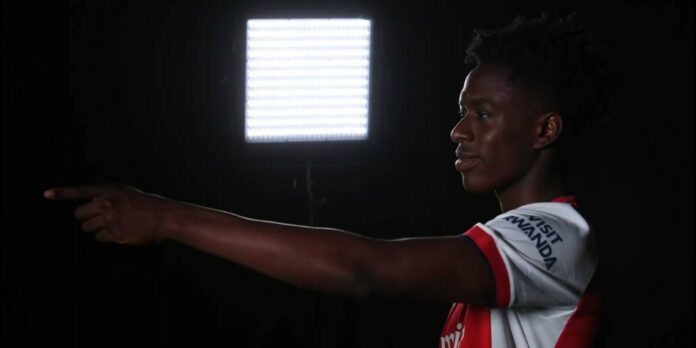 New signing Albert Lokonga says he can play as a box-to-box midfielder but he thinks he’s better known in Belgium for playing a holding role.

Arsenal are believed to have paid around €17.5 million for the 21-year-old Belgian who becomes the club’s second signing of the summer after the arrival of Nuno Tavares.

Excited to join up with Arsenal’s youthful first team squad, Lokonga said: “It’s a big move because I have been playing for Anderlecht for 10 years so it’s going to be my first big move to another country.

“It’s a big step, but I feel confident because in the football world, you have to feel confident about yourself, but I’m looking to play in this league and I can’t wait to start the league.

On his best position, he added: “I can play as a six and I can play like a box to box, but yeah, people say that I’m better in the six position.”

Lokonga is expected to travel with his new teammates to the United States for the upcoming Florida Cup. It’ll be interesting to see if he is partnered with Thomas Partey or preferred as an alternative.

Spurs 1-0 Arsenal: On the whistle observations

I like. Young, hungry, addresses a need. Big upside and if he doesn’t stick long term, sell on value. Good business, this.

BBC report that Lokonga signed for Anderlecht when he was 15, but here he said he’s been at the club for ten years.

Are we absolutely sure he’s definitely 21?

Takes me back to the signing of Kanu.

What I wouldn’t give to have him in his prime up front for us next season, for the best first name in football if nothing else.

In Total agreement, we are looking smarter with our business. Goood age , good profile and if you have read what his manager a certain Kompany has said about his prospects we have a real talent on our hands.

Partey of five
I’ll see myself out.

But when did he get the key to his parent’s house?

And did he get it ahead of his older brother?

It Is What It Is
Reply to  Eric Blair

His dad handed his bunch over as soon as he walked into the delivery room.

That’s not a good comparison. Lokonga was captain of a team which included over-30s while he was still a youth (junior level) player himself.

Whenever someone says “Not to be a”, they usually go ahead and do just that.

He was Anderlecht captain too. Sounds like he has some real leadership potential as well.

Best of luck! Welcome to Arsenal.

Not sure who downed you but I laughed.

You meant “less injury prone than a certain number 2” surely. I’ve read about similarities in their dribbling ability. Can’t wait to watch our Diaby.20 (minus the injuries)

Surely a long term replacement/alternative to Partey to begin with.

If he impresses he could start alongside him, but I think we’ll see him in the cups and as a sub in the PL to close out games to begin with.

The Xhaka replacement will be more of a passer.

Understudy to Partey or can play behind Partey and whoever replaces Xhaka in a more conservative line up without a number 10 would be my best guess. Definitely gives us more options for our midfield configuration which is definitely exciting to see. Good luck to him!

You will find them normally between 5 and 7

Traditionally a Number 6 is a defensive midfielder.

A 6 is traditionally a DM in continental Europe, especially a regista. I think in the UK the position tends to be associated with the number 4, but as the influence of the European games grows over here, it’s more common for the position to be referred to as a 6.

Here in Brazil nº 6 its Left Back LOL

Traditionally 6 was a central defender in England. Mr Arsenal himself – Tony Adams – wore 6 for many years. 4 was the defensive mid. But as others have said 6 is becoming more common for that now.

In the context of the article 6 is referring to a DM. But as the other commenters have pointed out above, it means different things in different places, usually tied to the tactical evolution of football in those places. Michael Cox wrote a fascinating series of articles (I think for the Athletic) on the links and history between numbers and positions and why 6 can refer to a DM in Europe a CB in England and a LB in Brazil.

The Observant Gooner
Reply to  Paul

Next logical player? The defensive mid sitting in front of them. Hence the number 6. In an ideal numbering system, the 4-5-6 form a sweet defensive core triangle (think Bonucci-Chiellini-Jorginho). But then come in the human choices: formation, availability and preference.

If using a 4-3-3 formation, traditionally in Europe (England aside), the players would wear a jersey number according to the following player roles. 1 – Goalkeeper 2 – Right Back 3 – Left Back 4 – Centre Back 5 – Centre Back 6 – Defensive Midfielder 7 – Winger 8 – Central midfielder (box to box) 9 – Centre Forward 10 – Offensive Midfielder (playmaker) 11 – Winger So a 6 would traditionally refer to a holding/ defensive midfielder. Numbers 7,8,10 and 11 tend to be more interchangeable than the others. In British football, the 4 and 6’s roles in… Read more »

Always thought the number 6 was a central defender partnering number 5 at the heart of the defence. Then 4 as the holding midfielder.
Anyways I know the modern game has so many formations now, maybe the traditional numbering system as evolved too.

You’re right that was the traditional numbering system in England – certainly at Arsenal. Before players kept their squad numbers the team was always 1 to 11. 5 and 6 central defence and 4 central midfield. This numbering was a hangover from older formations from the 50s back when players had different roles.

Will probably play alongside Partey if Xhaka leaves, and that is a big if. At any rate, can resist pressing a lot better than Xhaka, and is a decent passer himself, but also a lot quicker than Xhaka, which was Granit’s biggest drawback in the English game. The only thing that made Xhaka stand out was his long range passing, and that is something that Partey can actually do almost as well, but also something that can become Ben White’s task, who is very able in that regard. Partey – Lokonga , we good, lets focus on a creative midfielder… Read more »

Don’t forget Gabriel. He can play them long passes, too!

Like the look of this guy a lot! He looks technically very good and hyper-mobile which is now one of the most important attributes in the EPL.

It is going to be super interesting who else we sign for CM. I personally would love Aouar (is there another name with four vowels in a row?) Think his dribbling and technical ability would be a good mix with Lokonga and Partey.

Have you been invited to Aouar (lo)Konga Partey?

Sign a CAM and RB and we are good to go.

Does this signing spell the end for Maitland-Niles?

I can’t imagine we go into the new season with the four CM options of Partey, Simbi, Elneny, AMN – but perhaps Arteta is settled on that.

Also curious if Torreira will return to Arsenal pre-season training after his post Copa America holidays. Uruguay were eliminated 3rd July so his 4-week holiday should be finished Saturday next week.