Arsenal officially announced the signing of Nuno Tavares from Benfica. That means we need to become experts on the player and if you’re like me you have probably seen around five minutes of him actually playing (the five minutes he got against Arsenal in the Europa League).

A good place to start (and what I feel comfortable breaking down) is what do the stats say about him.

First is the high-level view of his breakdown compared to other fullbacks: 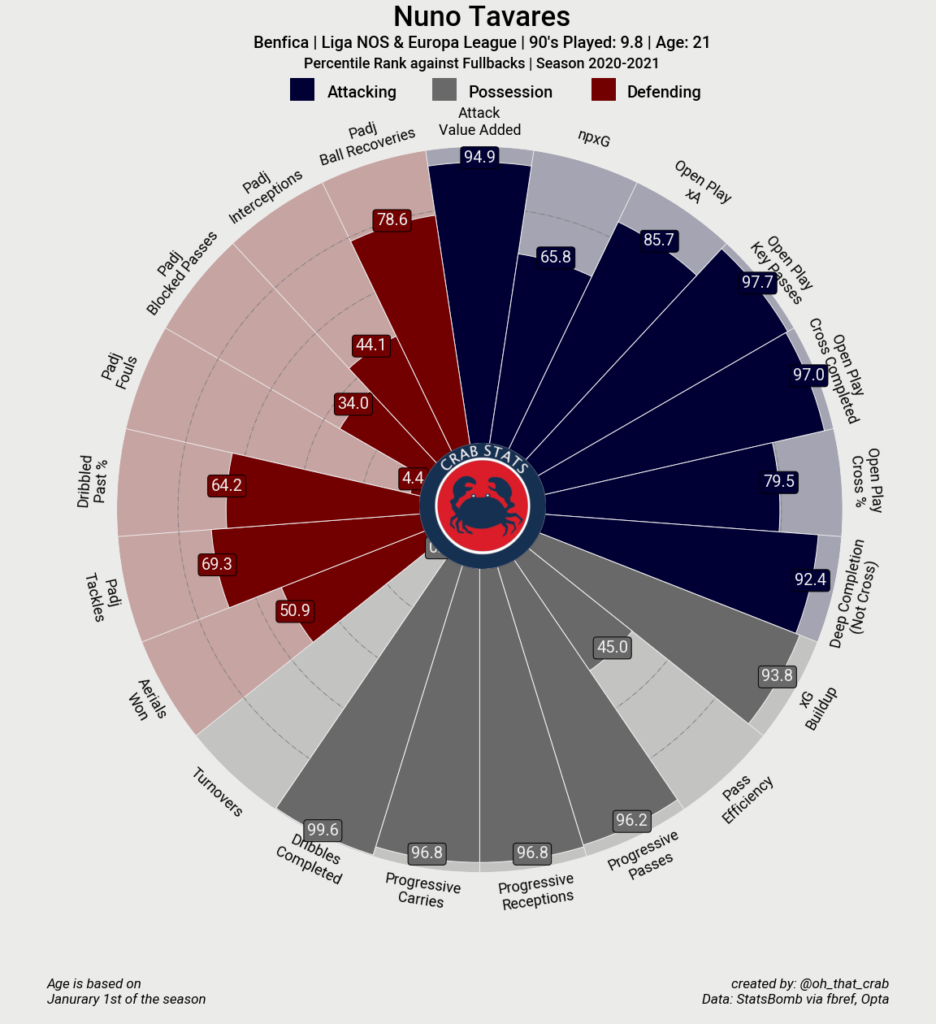 Overall this is a very impressive looking chart, but it does come with the caveats that he does not have a lot of minutes, just 880 total minutes with much of that in the Portuguese Liga NOS.

I am not an expert on Liga NOS but the rankings suggest that outside the top 3-4 clubs the quality of the rest of the league at a Championship level or below. Given that it is important to take the above rankings with a grain of salt because he played against significantly lower competition than the typical player from a top 5 league.

11 – Open play crosses completed (27.5%). That may sound low but that is actually a very good cross-completion percentage.

Overall Tavares looks like an impressive attacking fullback prospect. He completed a lot of passes into dangerous areas and he looks to be a very good crosser. With Kieran Tierney playing a similar attacking-focused style, it will be nice to have a backup who should be able to do similar things. 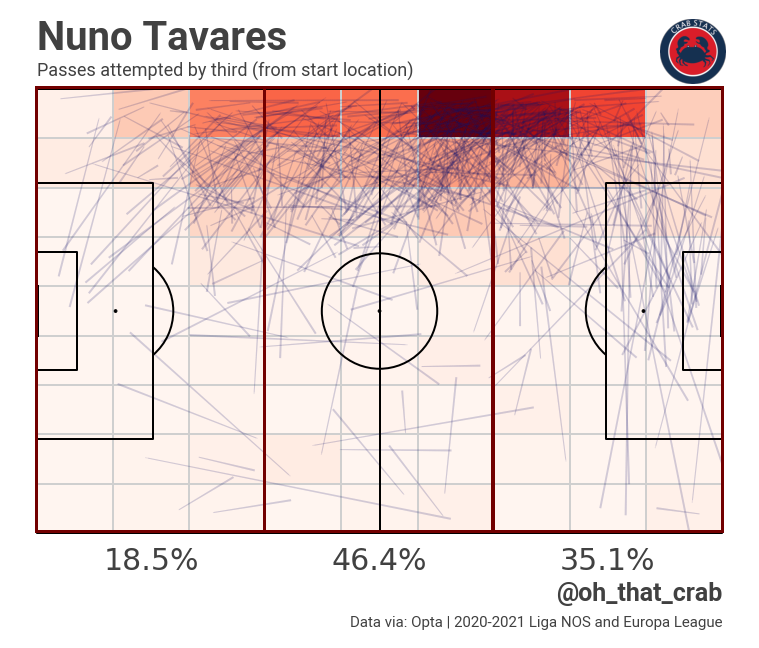 Overall his passing profile looks like you would expect from a left-back. He isn’t the most efficient passer but that is likely driven by him attempting relatively harder passes.

45 – Turnovers (dispossessed plus miscontrolled touch), 4.6 per 90 (the flip side of all those dribbles) 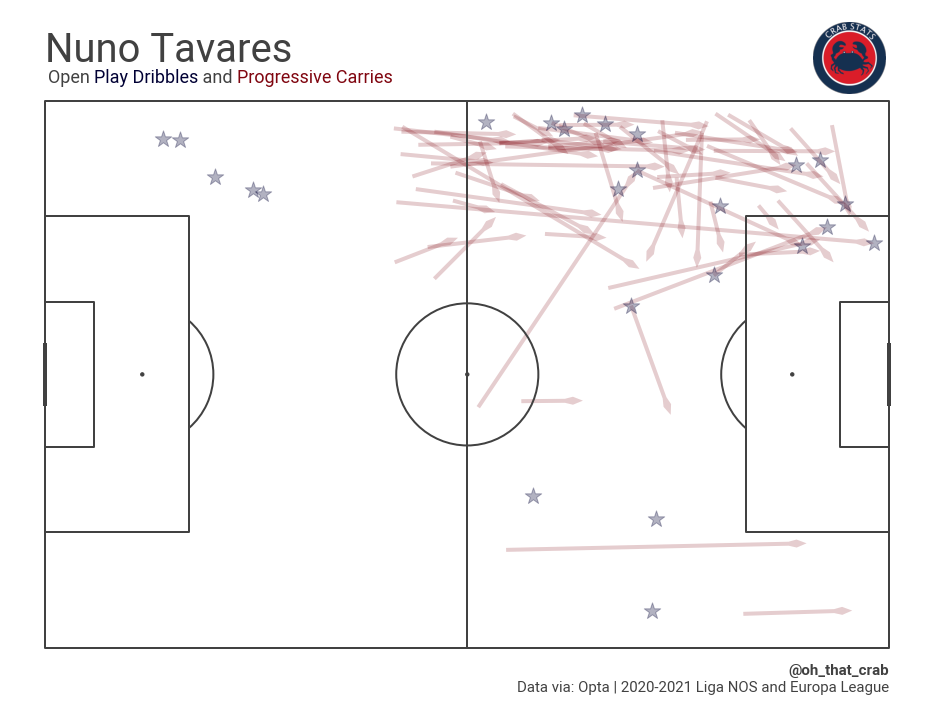 Tavares’ ability on the ball, looks much more like a winger rather than a full back. This seems to be his “special” skill where he is able to provide the most value to a team’s attack. 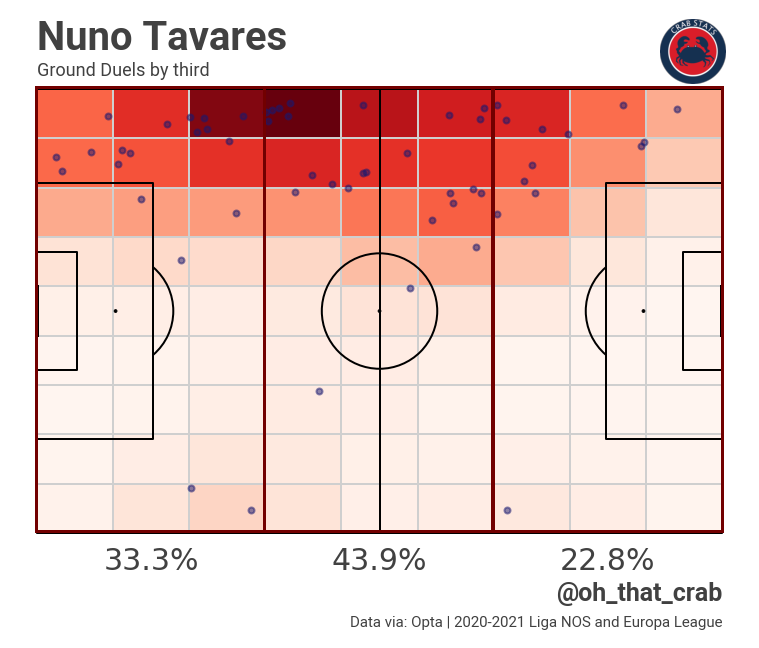 Tavares looks to be just as aggressive on defense as he is when taking on players. Where he does his defensive actions match what you would expect from a full back (which I think is positive, seeing as his attacking numbers look a lot more like a winger).

When Arsenal was linked with Ryan Bertrand I was concerned, it is not that I don’t think Bertrand is a good player (he seems very average) it just seemed the type of move where it was safe and brought in a player who would be comfortable to sit on the bench behind Tierney. I think that Arsenal has had too many of this type of player and it wasn’t something that would push the club forward.

Tavares is certainly a more risky signing in that sense. Benfica wasn’t able to extract a large fee for him (partially because they wanted to get this done in the current fiscal year) even with the obvious talent.

There is a good chance that Tavares never really becomes a first-team player for Arsenal, partially because that probably means Tierney continued to play a the level that we expect from him or that he doesn’t live up to what his talent suggests he might become.

Either way, this is a move where Arsenal brings in a player who has the potential to make the team better but who should also comfortable with the pecking order of the current left-back depth chart.

Don’t want to spoil Nuno’s welcome to Arsenal but United got Sancho. Where is the decisive change for a team that finished outside european places the first time in 25 years?

Who cares what United are doing. We have Saka – he’s better.

Arsenal are linked and close to more deals for more “decisive” change. I wouldn’t freak out about this yet.

The same Sancho whose position for England is “backup for Saka”?
I can sort of see the relevance of the comment, given the “lesser backup player” theme of the article…

He’s young, so the defending and other stats should improve. Though a tough competition, if he’s trying to get in the team in front of the excellent Tierney.

There’s a possibility that Tierney will play on the left of a back three at some point this season, with a young ‘un like this at wing back that’s already a better prospect.

Tierney would be wasted in a back 3. His strength is bombing down the flank.

Yeah I don’t get the recent hype about switching Tierney to LCB, as it would potentially nullify most of his attacking contribution.

Wouldn’t be surprised if he’s used as a LM/LW at times. He’s breakthrough abilty is excellent.

Exactly, good backup for Tierney, but looks useful as a more defensive LM/LW when the need arises.

“Tavares’ ability on the ball, looks much more like a winger rather than a full back.” – Was thinking exactly this when looking at his pizza chart.
Hopefully the coaches can improve his tackling and resistance to being dribbled.

Hey Spuds- We’ve got our own Nuno and he took up our offer first time!

Why does everyone just assume that he’s “fine with the pecking order” behind KT? I certainly hope that he is not fine with it and can challenge KT for the role. We finished in 8th…not like we have a bunch of players that are world class, although KT is probably the closest we have considering position (I’d say top 5 in the world in your position qualifies as World Class but your mileage may vary here)

A very good breakdown of his best and worst attributes. Thanks Scott. While his percentile rankings should be treated with caution, I think it’s bit too much to say that quality of opposition the Portuguese big 3 face is Championship Level or below. I don’t really understand how the UEFA Club Rankings work but I don’t believe that Burnley, Southampton & West Ham are realistically better sides than Lille, Vitoria Guimaraes or Maritimo. I think just recently, Braga knocked Wolves out of the Europa League in 2019/20. The non-big 3 Portguese clubs have much better experience in Europe and that… Read more »

It is really when you get below the 4th place team where things really fall off. Portugal I believe is close to taking over Ligue 1 spot in the Uefa coefficient rankings. The top teams are good, the bottom teams are bad.

I respectfully disagree. Your position is essential a diplomatic and polite way of labelling the Portuguese League a “farmer’s league”. Which of course, you’re entitled to see that way if you wish. Even adjusted to the number of teams, the relegated clubs in the Primeira Liga performed better than relegated clubs in the Premier League last season. The bottom three clubs in Portugal had a better goal difference and points total per game than the bottom three clubs in England last season. If anything, judging by their historical performances in Europe, I’d say the quality gap is more drastic between… Read more »

But fuck me have you seen Martinez?

Still love Martinez, but too bad he wanted to go to Villa. Got him what he wanted the most, regular playing time and dibs on the Argentina role, but he’s going to miss out on our rise back up the charts.