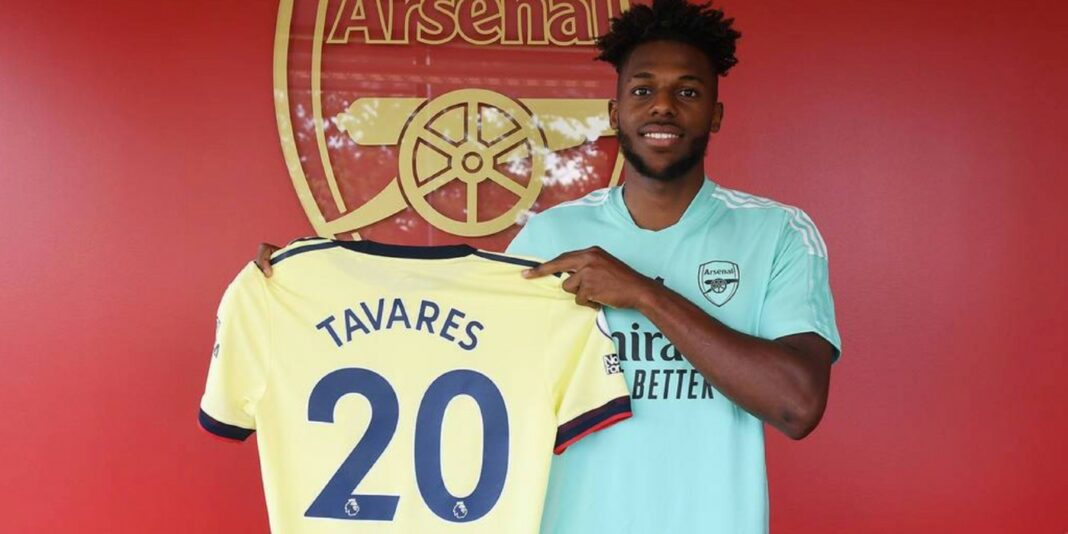 Arsenal have officially signed Nuno Tavares from Benfica in a deal believed to be worth around €8m.

The 21 year old left-back arrives as back-up for Kieran Tierney, who signed a new long-term contract with the club two weeks ago.

Speaking about the deal manager Mikel Arteta said: “We welcome Nuno to the club. He is a young player with great promise who has developed very well with Benfica in recent seasons and has also shown his quality by being part of Portugal Under-21s.

“Nuno’s arrival will give the squad extra strength and options in defence, particularly with this energy on the left side of the pitch. We look forward to Nuno’s arrival soon, his integration into the Arsenal family and playing in front of our fantastic supporters.”

Tavares, who will wear the number 20, has comes through the ranks at Benfica, progressing from youth level to first team where he made a total of 41 appearances since making his debut in 2019.

Tavares’ arrival probably means the end for Sead Kolasinac who, despite having one year left on his contract, is now well and truly surplus to requirements. He is no longer in Mikel Arteta’s plans, as evidenced by the decision to loan him in January despite being the only cover for Tierney, and the decision to sign another left-back copper-fastens that.

Welcome to the Arsenal, Nuno.

Blimey a new signing, i don’t quite believe it! Welcome to The Arsenal

Warn the dogs of north London

I don’t get the reference?

Tavares uploaded a video of himself literally french kissing multiple dogs. It’s worse than you could imagine

A signing! Good to have a back up to Tierney. One problem from last season solved. Now we need to somehow move on Kolasinac. I have a feeling that may just have to be by paying off his contract though… hope I’m wrong on that.

No! Gutted. When he joined Arsenal from Ipswich, Marrers was a breath of fresh air in a what was a divided 1984 Arsenal dressing room. Nicholas, Rix, Woodcock and Sansom on one side; Talbot, O’Leary, Davis, Robson and Hill on the other. Terry Neil had been sacked and Don Howe was doing his level best to awaken a sleeping giant. Paul Mariner (and later Tommy Caton and Viv Anderson) almost managed to galvanise and unite the dressing room and for a while at the start of 84/85, we beat Liverpool 3-0 at Highbury and looked like genuine title contenders. Alas,… Read more »

A very wonderful and touching tribute, Q. It really helps capture what he meant to Arsenal for gooners like myself who weren’t around at that the time.

May his soul rest peacefully.

That recollection is outstanding I love that.

Viv The 🐐
Reply to  Merlin’s Panini

He will probably for no fee or a very low one and his wages will be his transfer fee for the next club. Which is understandable but also better than paying him off.

I have a lot more respect for Sead though. We got him from the Bundesliga on a free when he was in their team of the season, always played wing back and his assists outweighed his defensive culpability. We gave him a fat paycheck, he was reasonable for a while before his frailties came to the fore. Not his fault as his passing stats were always piss poor even before he joined Arsenal. But he has been a model pro, never made noise and stood up for his mates both on the pitch and for Ozil, off it. So, if… Read more »

This’s the type of positive outlook i look for as i read through the comment section. Cheers Aaron!

It is a rare thing on here, and thus incredibly valuable! A good reminder of how to be — the comment policy of Saka.

Well written. He worked hard for the team, remember watching the game on tv, he chased for the ball, tumble over and puked, got up and finished the game. that’s pure commitment.

WELCOME TO THE ARSENAL. A much needed signing. Hopefully this does to Tierney what the telles signing did to Shaw, and Kieran Tesco Tierney desperately needed a back up so he isn’t run into the ground, hopefully this will mean he isn’t overplayed into injury as well.

Get In. Welcome to Arsenal.

Welcome to the Arsenal Tavares. May our Nuno surpass the bearded Nuno down the road

One year left on Kolasinac’s contract and I wonder what will happen with him? Another year loan somewhere to offload his wages, maybe he agrees to drop his wages and we sell him for a humble fee or a mutual cancellation of his contract?

We employ him as chauffeur for our Young Guns. They’ll never feel safer.

This is a very Arsenal like signing if we overlook recent history..

Let’s wait and see if he’s any good first

Very happy about this signing. Gives Tierney some chances for breathers, and a young signing on the cheap. This is the direction Arsenal should be going in. Hopefully some more much needed signings to be announced soon.

Nice. Pretty hard for this to go wrong, good start.

Oh sorry, I got confused.

Welcome to Arsenal, Nuno. Hopefully a change of scenery is just what he needs and he is able to prove the Benfica doubters wrong.

The jersey number should put him in between Cedric and Chambers in the dressing room. Maybe that’s why he chose it.

Looking forward to commentators correctly pronouncing his name as Tavarezzzzsh

Does his name include the sound of Tierney having a well earned rest?

Welcome to The Arsenal, Nuno. You look like Fred though, hope you can pull off a backheel successfully

A backup to Tierney?

Kolasinac along with Willian are the perfect examples of not offering to triple or quadruple their wages above what their talent level is just because they are on a free. Because when it doesn’t work out Arsenal then can’t sell them on because of their excessive price tag of wages.

That’s why rather than the 220k a week that was offered it should come in the form of an upfront fee direct to the player with lower wages. (Is this legal?)

Isn’t that sort of what the signing-on fee is for?
Player vs club parity is always welcome but wouldn’t this proposal also put the club in a weaker position?

What happens if a player breaches their contract like through a criminal conviction.Sure, the club can terminate the contract. But they would have already paid the player most of the contract’s worth because of the higher upfront fee. They might not be entitled to get that fee back.

I wish him every success. God knows we could use it.

Great signing and hopefully a sign that the club will invest in players young enough to have some resale value. Not to mention a hunger to succeed.