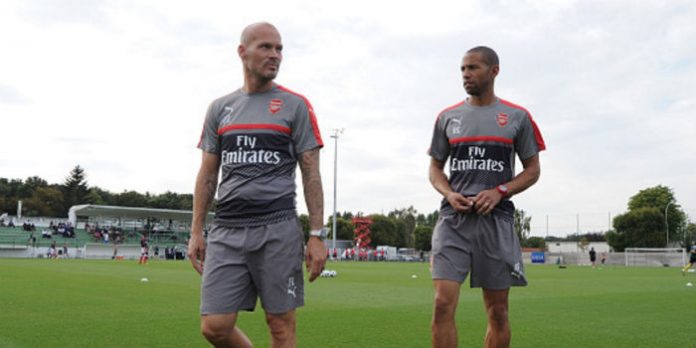 Ryan Garry knows more than most about the highs and lows of being a youth player.

While at Arsenal’s academy Garry, who was highly rated at the time, was part of the FA Youth Cup winning squad of 2001 and went on to make his Premier League debut against Southampton at Highbury in the first match of the Invincibles’ 49-game unbeaten run in 2003.

Subsequently, however, matters took a turn for the worse for Garry, who endured much misfortune with injuries and suffered shin splints which dictated that he would never play a competitive game for the first-team again.

Following a spell with Bournemouth Garry was forced to retire at the age of 27 having struggled with injury again and he then took his first steps into coaching.

Garry initially became first-team coach and defensive co-ordinator at Bournemouth before leaving 10 months later which led to him applying for a coaching position at Hale End.

Despite having been rejected initially, Garry was eventually given a position coaching the U13s and he has worked his way up to now be in temporary charge of the U23s.

Arsenal are still on the lookout for a permanent replacement for Steve Bould, with England youth coach Kevin Betsy having been strongly linked with the position.

However, Garry will be determined to show that he deserves an opportunity to lead the U23s. The former defender has gained much experience from being assistant to Freddie Ljungberg and then Bould, while he has developed a very good rapport with the players and can pass on his knowledge of the difficulties of making the breakthrough.

The U23s’ pre-season plans have been disrupted by coronavirus, but as things stand Garry will be the man in charge when Arsenal take on Ebbsfleet, Bromley and Boreham Wood in their upcoming pre-season friendlies.

This could be a chance for Garry, who already possesses a comprehensive knowledge of Arsenal’s U23 squad and the academy system in general, to demonstrate that he deserves the job on a full-time basis.

He may have only played a single game for the Arsenal but if you knew you had only a single game to play, that’d be a great season to choose.

he didn’t play in the invincibles season, he played the last game of the previous season, the first of the 49 game unbeaten run. Don Howe said Garry was the best young defender he ever coached at youth level. Awful what those broken legs done to his career

Surely we need to employ the best candidate available for this very important coaching position within the club. If that’s Garry then that’s fair enough, but if there is a better qualified candidate out there then it’s got to be them, hasn’t it?

Yes, I agree that should be the case. The fact that they haven’t hired anybody yet and have put Garry in temporary charge suggests there aren’t many outstanding candidates elsewhere. It would also be beneficial to have someone who has worked with the players already.

Yes, if he’s the best qualified – and having worked with the players is an added advantage, of course – then it should be him.

Thank you Jeorge for your excellent articles and responses. Also love hearing you on Arsecast as well.

Isn’t it a bit disappointing Per and Edu (?) sacked Bould without a candidate in mind?

Or have we had setbacks making the appointment a la Palace?

How I wish Freddie stayed on. Or maybe we can bring in Pires? If he’s willing and qualified. Both seemed to really want to see a progression of the academy players into the first team.

Sometimes it’s easy to overlook what you already have in favour of something new. Sounds like he’s doing a good job so give him a chance, he’s young, knows the club and players, there doesn’t seem to be any must have youth coaches out there who are any better, so what’s to lose?

I still think the way Steve Bould was treated is unforgivable – but then again nothing surprises me anymore about the way this club is run nowadays.

How would you have liked them to treat him, job for life? I’m sure that internally, the stuff we don’t get to see, his contribution was recognised.

How was he treated?

Really feel that we should promote from within when the personnel is available.

Then again, there is a constant desire for new and shiny things in current sports culture.