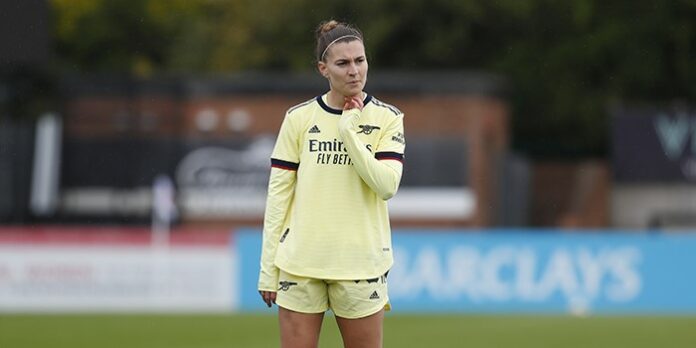 Australian left-back Steph Catley has changed her squad number from number 12 to number 7 for the 2021-22 season. Catley wears the number for her country and has worn it at most of her previous clubs.

Danielle van de Donk was the previous incumbent of the shirt but the Dutch midfielder left for Lyon this summer, leaving it free for Catley. This frees up the number 12 shirt, which is likely to be taken by a new signing, with summer captures Nikita Parris taking number 14, Mana Iwabuchi 23 and Simone Boye 20.

Meanwhile, it has been announced that Arsenal will not be asked to participate in the Conti Cup (the women’s equivalent of the League Cup) group stages this season if they are successful in qualifying for the Champions League group stages.

Chelsea are guaranteed in the CL group stage and have been given a bye to the quarter-final, while Manchester City will be too if they get through their two-legged qualifying round. Arsenal have to play two qualifying rounds to be assured of group stage progression, starting with a match against Okzhetpez in Moscow on August 18th.

The draw for the Conti Cup group stages takes place on Friday at 1.15pm and Arsenal, City and Chelsea will not figure, with Arsenal and City added to one of the groups subsequently in the event that they fail to qualify for the group stage.

Tim, who would you start at LB (assuming a back four and everyone is fit)? Catley or McCabe?

Let’s just hope Steph can stay fit and have a great season!