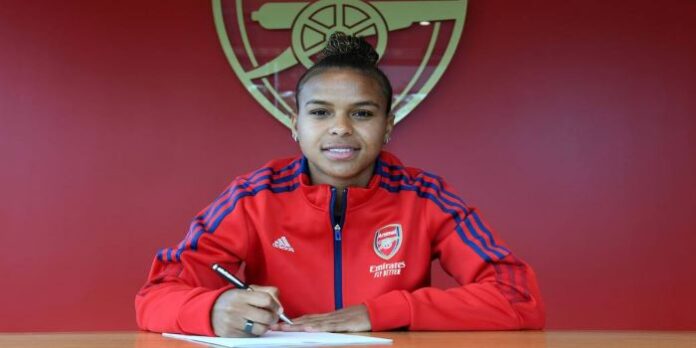 Arsenal Women announced the signing of former Everton and Manchester City forward Nikita Parris from Lyon on Friday. Keets spoke to the press on Friday afternoon and Arseblog News had the opportunity to speak with her. The quotes below are taken from questions asked by Arseblog News, as well as Pippa Monique from AFTV and Arseblog and Art de Roche from the Athletic. “Number 14 and Arsenal speaks for itself,” the new Gunners number 14 says, “It’s Thierry henry, isn’t it?”

Nikita joined Lyon from Manchester City in the summer of 2019 after a season in which she scored 18 goals in 19 WSL starts for City. In France, Parris won a D1 Feminine title as well as the Champions League in 2020. However, she insists it was always in her mind to come back to England and she explained why Arsenal was the best choice for her.

“The WSL has changed so much even in the last two years; the games are so much tighter now and the talent is spread across the teams. With Arsenal in particular, I spoke to Clare (Wheatley) and I already knew the history of the club- though I wasn’t an Arsenal fan they were the team to beat and I loved Julie Fleeting (former Arsenal striker).

“But Arsenal have put a lot of improvements into the women’s team too and thinking of what I want for my future, it aligned with what Clare was telling me so I thought, ‘let’s give North London a go!’” Parris is currently the third highest goal scorer in WSL history just behind Vivianne Miedema and Ellen White and she admits that getting back to the top of that tree is in her sights.

“I’m a forward so it’s always in my mind,” she smiles. “I think like a striker, I want to score goals and I want to make history.” Nikita has taken the number 14 shirt and she insists that was her choice and for one very particular reason. “Number 14 at Arsenal speaks for itself- it’s Thierry Henry. He was an idol for me growing up and he wore the number 14.

“I’ve had the pleasure of being interviewed by him because we’re both Puma athletes and I’ve spoken to him a lot about football and it’s crazy how much our thought processes on football are aligned. 14 just felt right.” Art de Roche from the Athletic asks Parris to expand on why she felt such a strong connection with Thierry the person, as well as the player.

“We both demand so much from ourselves, it’s not pressure from the outside that makes you want to win it’s the pressure within and your expectation level of yourself. He also talked about his dad and how he never wanted to disappoint him and it’s exactly the same for me with my dad, he’s the first person I go to when I finish a game because I know he’s going to tell me how it is and not hold back. He’s really humbled me at times but also given me that encouragement to keep pushing on.”

I ask Keets about another Arsenal striking legend who she will be playing with in the shape of Vivianne Miedema. “You want to play with the best talent and she is the best talent, she scores goals for fun. But she doesn’t just score goals she loves bringing others into play. But look, when I play for Arsenal I want to help push them forward so we start winning the biggest trophies again, you need the best players to do that and she is one of the best.”

Parris comes into an Arsenal forward line that includes other stellar names like Caitlin Foord, Beth Mead, Mana Iwabuchi, Katie McCabe and Lisa Evans. I ask her whether she has had the opportunity to speak to the new coach Jonas Eidevall yet. “I spoke to Jonas before I signed,” she confirmed, “We spoke about the best way for me to help the team and we spoke about the roles he sees me in in the formation he wants to play.

“The most important thing though is what’s best for Arsenal and we all contribute to scoring goals. There is great talent in every position and we have a lot of depth. No one player wins you a league or a Champions League.” Keets was a Champions League winner at Lyon, spending two seasons in France after leaving Manchester City in 2019, I ask her how she views her time with Lyon.

“I was always going to come back to England, I had just been in the WSL since I was 16 and I wanted a new experience, it wasn’t just for football but for personal reasons. It wasn’t easy but I have come out a better person and a better player. The demand in training at Lyon was so high and the expectation level at the club and from the fans was so high too and that really pushed me on.” She admits that the language barrier was an obstacle for her initially but one that she felt she overcame.

“I felt I really integrated myself with the team and the culture but it was difficult in the first few months because of the language. I don’t think my teammates have ever heard me so quiet! After that first Christmas I came back and I was more myself and my teammates were all like, ‘who is this?!’ And I had to say, ‘this is me, guys, I just needed a bit of adaption time!’

“It’s a different ball game when you go abroad because you have to think of the language, the culture but also the football is different. Every day when I went home my head was absolutely banging! I took more naps in my two years there then I’ve ever taken in my life, I think.” Now she has arrived in North London, Keets will be looking to give headaches to opposition defenders.

That attacking line up is hot!

Are numbers real, though?

It took you decades to bring the Hamburgler to justice. The citizens of McDonaldland suffered because of your incompetence. Who are you to question the value of jersey numbers?

The biggest problem for Jonas will be who to leave on the bench, whoever he plays Arsenals attack will give the opposition big problems.
Training will be interesting with so much talent competing for a start.

I’d like to see Arsenal sign defensive mid K. Hamraoui, who’s now a free agent after playing for Barcelona for a few years. She’s 31 but I’ve never watched her play without being thoroughly impressed. Tall, strong, polished. Would be a big defensive addition to the midfield.