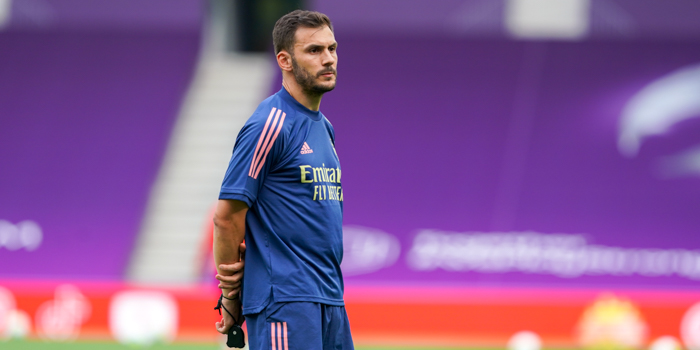 Arsenal Women coach Jonas Eidevall is still quarantining following his arrival from Sweden, so assistant Aaron D’Antino took the game today. He spoke to Arsenal Media post-match, who have allowed Arseblog News to use his quotes.

On Jonas’ level of involvement in the game…
“With the technology we have he was with us every step of the way, pre-match he gave the team talk virtually. I was talking with them through the game and he spoke to the players in the changing room on video, so he was with us the whole way through.”

On playing at Emirates Stadium…
“Hopefully this is the start of more occasions like this for us and the more we can get used to playing here, the better. Hopefully this was a first step in that respect to more games here.”

On the academy players playing the final 30 minutes…
“It was also great to get the younger players on for the final thirty minutes, in front of a big crowd, it was a great experience for them. They played a big part in our preparation today and it was great to be able to reward them with the last thirty minutes. They stepped up to the occasion and won the game for us at the end.”

On the injury to Jordan Nobbs…
“I haven’t had a chance to speak to the medical team yet, we’re hopeful it’s not too serious but we won’t know for a bit.

On playing Spurs next weekend…
“It’s the right preparation because it’s a big game and we have some big games in the Champions League, it’ll be a big game in front of another big crowd.”

Just 17 years of age.
Playing at the Emirates.
On her first-team debut.

What a moment for Freya Jupp 🤯 pic.twitter.com/UpWqzCTyYz

On the victory….
“It was a terrific result and we know it’s only pre-season but it was nice to get the win, especially playing here at the Emirates. The game was played at a good pace and we’re looking forward to the start of the season.”

On being coached ‘virtually’ by Jonas Eidevall…
“He gave the team talk via Zoom which I think is a first for me in my career! But the other coaching staff have been here during pre-season keeping things ticking over for us. He’s in with us next week and we’re all raring to go.”

On the academy players coming on for the final thirty minutes…
A lot of them have been training with us because of the amount of girls we have away at the Olympics and they have been great and you could see that in the final part of the game, winning it for us. Really exciting experience for them to play on this stage.”

On upcoming Champions League qualifiers…
“Even with the players we have away we have a really strong team, as we saw today but some of them will be coming back and it will be great to have them again and to get together and our focus will be on those games now.”

And some on the injury to Jordan which is tough on her, on Arsenal and on Arsenal fans today pic.twitter.com/qU9IZCZOZL

Great experience for the academy girls.
A prayer that Jordan’s injury is not serious.

I thought Goldie looked very good. Only just turned 17 but more than held her own when facing the likes of Pernille Harder and Beth England. Well supported by a very vocal Boye.

Despite being pre season, I really like the intent showed from the team from the first minute.
Though plenty of players were missing from both sides, it was a very driven game to watch.
Echoing Chris’ comment also, what a fantastic experience for the academy girls.
An impressive performance against one of the other big clubs.

Any update on Jordan?

Agree that it was a great outing for the Academy girls and hope this goes some way to ensure we dont lose any more young talent to rivals.

great outing for the Academy girls and hope this goes some way to ensure we dont lose any more young talent to rivals.

Agreed. This was my biggest gripe with Montemurro. Hopefully this philosophy changes with Jonas the helm.