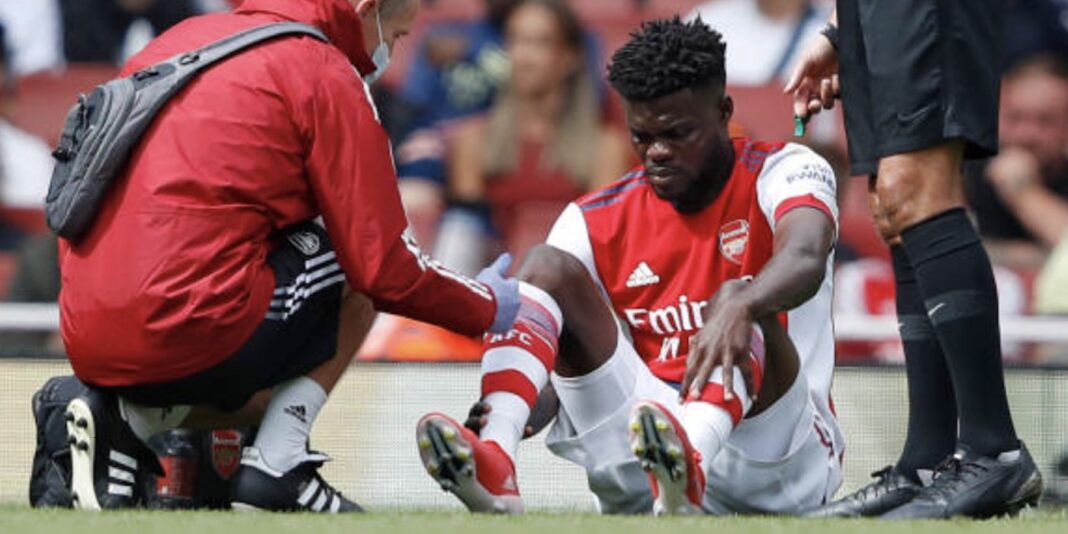 Arsenal will be without Thomas Partey, Eddie Nketiah and Gabriel for tomorrow’s Premier League opener against Brentford but don’t appear to have picked up any additional injuries in the last week.

Partey and Nketiah both suffered ankle injuries in the pre-season defeat to Chelsea while Gabriel had to sit out Brazil under-23s’ Olympics campaign with an issue in his right knee.

The latest bulletin from the medical department says the Ghanaian will be back in training by the end of August. Nketiah and Gabriel will follow in early September.

On Sunday, Mikel Arteta mentioned that Rob Holding had missed out on the pre-season friendly with Sp*rs due to a fitness problem. We’re assuming that he’s recovered from whatever that was.

Arsenal should have charged $40m for this documentary, it’s gonna be fantastic.

Okay, I can take that. First match against Brentford, even though it’s an away match, is a must win. Don’t lose against Chelsea at home, and then whatever happens at City I guess. With Partey back in the team in September and Gabriel hopefully slowly being back as well, we should really start building our momentum. My line-up for tomorrow: Leno, Chambers, White, Mari, Tierney, Sambi, Xhaka, Pepe, ESR, Saka, Auba. If the management feels it’s too big of a risk to start Saka after 10 days of training and 30 minutes of playing against Tottenham, then I guess Auba… Read more »

I actually really like that line up. Looks quite tasty. Arteta’s biggest job this season is creating a front four that gel. For my money, that’s a lot of creativity and if Auba can get out of his funk, there’s goals there too. For the first time in a long time, I have no fucking idea how this season pans out. We could finish 5th or 15th. With Wenger you kinda knew what would happen. With Emery you knew it would be a bit worse than Wenger but not too awful. But I haven’t got a clue what will happen… Read more »

Agreed – I think the more matches we see without Xhakneny and without whatever the portmanteau of Lacazette and Aubameyang is, the more games we win. Otherwise I don’t see we’ve got enough creativity, and a lot rests on ESR who I fully back in that 10 shirt but he’s still young. And this of course relies in turn on us doing something in the transfer market that enables us to field such lineups, which should reduce some of that uncertainty in an upwards direction. And really I want us to buy well because I want to know if Arteta’s… Read more »

Haha I assumed so but didn’t want to be presumptuous

In 5 years arteta might be a good manager. Maybe even probably will be. But he’s out of his depth. We’re his learn to swim class. That alone says a lot about the status of the club now – we’re a staging ground; a stepping stone club.

A very insightful take. Is there not a possibility that it’s both Arteta AND some squad members e.g Xhakneny?

Regardless of wherever Mikel ends up, it would do him some good to rid himself of Albert Stuivenberg and Steve Round. I don’t know who told him it was a good idea to hire two United rejects who were sacked with their bosses after implementing crab football tactics.

“We could finish 2nd or 12th” has a slightly nicer ring to it.

Less reality though. Do you think we have any chance at 2nd? Meanwhile, it’s a scary reality the wheels could completely fall off the wagon and we could finish 15th (gulp… Or worse 😬)

The Ghost Of Reiss Nelson
Reply to  Red-Wing

Mpls
Reply to  The Ghost Of Reiss Nelson

As much as I like Martinelli, this match is one we must bully given the two following. In light of our preseason matches, this start is extremely important and not one for character building.

The Beast
Reply to  Red-Wing

That’ll probably be my strongest line-up as well, with the slight tweak of playing Laca instead of Auba even if Saka’s in the side.

I thought he looked pretty sharp in preseason & he’s looked more up for it from the start of matches as well.

Will be interesting to see how much playing time Balogun & Martinelli get this season. Considering we already got 3 out injured before a ball’s kicked in anger, I’m guessing it’ll be a decent amount

A Different George
Reply to  Red-Wing

Much more likely Bellerin for Brentford I think.

Let the long awaited season begin and hopefully we can maintain our current league position by the end of May 2022.

What God can not do, does not exist.

If Arteta still couldn’t figure out he’s starting XI after a couple of weeks and insists on changing and chopping like he did the past season and half, then it will be another season down the drain.

The Ghost Of Reiss Nelson

Hopefully sambi will be parteys replacement for this match. If elneny starts the first game of the season I am not going to be happy

Hakuna Matata
Reply to  The Ghost Of Reiss Nelson

What if we win convincingly?