THE LOWDOWN
Arsenal take on Slavia Praha Zeny in a two-legged qualifier for the right to play in the Champions League group stages. The first leg takes place at Meadow Park this Tuesday evening with the second leg in Prague nine days later. Given that the Gunners could have drawn Lyon, Wolfsburg or coach Jonas Eidevall’s former team Rosengard, there is no hiding that this was the preferred tie for Arsenal.

However, they cannot allow complacency to set in in a huge week for the club, with the WSL campaign kicking off against Chelsea at Emirates Stadium this coming Sunday. Arsenal are also still hoping to bring in another player prior to the close of the summer transfer window on September 2nd with midfield looking a little light due to injuries.

We can’t wait to see you again, Gooners ❤️

Nevertheless, Arsenal will be heavy favourites for this tie and having beaten Slavia 8-0 at Meadow Park in October 2019, a similar score line would make the second leg a formality and give Jonas Eidevall the opportunity to rest players. Nine players were at the Olympic Games in Japan and essentially haven’t had a pre-season break, so Eidevall will need to use the squad shrewdly this season.

This also represents the first game at Meadow Park in front of supporters since December when 1,000 were allowed into the home victory over Birmingham City, the only home match Arsenal played in front of a crowd last season. My understanding is that the East Stand has had a lick of paint but wasn’t quite ready to be used for Boreham Wood’s first home match of the season on Saturday.

TEAM NEWS
Arsenal welcome back Leah Williamson after she missed the previous round of qualifying in Moscow due to personal reasons. Jordan Nobbs (ankle) is still unavailable but Lia Wälti returns after a tight calf kept her out of the games against Okzhetpes and PSV Eindhoven. Viki Schnaderbeck (knee) is still out, Fran Stenson didn’t travel to Russia and her name has been removed from the Arsenal squad list for these games but it’s unknown whether she is injured. Malin Gut (ACL) is out.

LAST TIME OUT
These teams met in the Round of 16 in the 2019-20 competition with Arsenal running out 13-2 winners on aggregate, they won the first leg 5-2 in Prague before an 8-0 victory in the second leg at Meadow Park. Vivianne Miedema scored seven goals across those two legs.

THE OPPOSITION
Slavia have won 18 Czech league titles, winning it most recently in 2020. They were runners-up to city rivals Sparta last season, who are the most successful team in Czech women’s football. Slavia are Champions League regulars, first competing in the competition in the 2003-04 season. Last season they were eliminated in the Round of 32 by Fiorentina.

Slavia’s squad is entirely made up of Czech players with the exception of Tunisian international Chirine Lamti. Current coach Michal Kolomazník took over in 2019 and is a former player and Czech international. Slavia have progressed to the quarter-finals of the Champions League on three occasions but were eliminated by Lyon, Wolfsburg and Bayern Munich respectively.

PLAYER TO WATCH
Mana Iwabuchi has been Arsenal’s most impressive performer so far in the Champions League qualifying rounds, helping herself to a couple of goals in the recent defeat of PSV Eindhoven- the first of which was a screamer from a short corner. Signed from Aston Villa this summer, the 2011 World Cup winner was pursued by Arsenal for a few transfer windows before they finally completed the purchase.

Don’t even need the vote, just give it to Mana Iwabuchi now

Best friends with Vivianne Miedema from their time together at Bayern Munich, Iwabuchis has struck up a swift understanding with her teammates with her disguised passing and swift dribbling. “It is always easier to adapt to a new team when you are very intelligent,” coach Jonas Eidevall purred after the recent victory over PSV. With Jordan Nobbs injured, Iwabuchi is playing in the number 10 role and acclimatising very quickly to life at Arsenal. 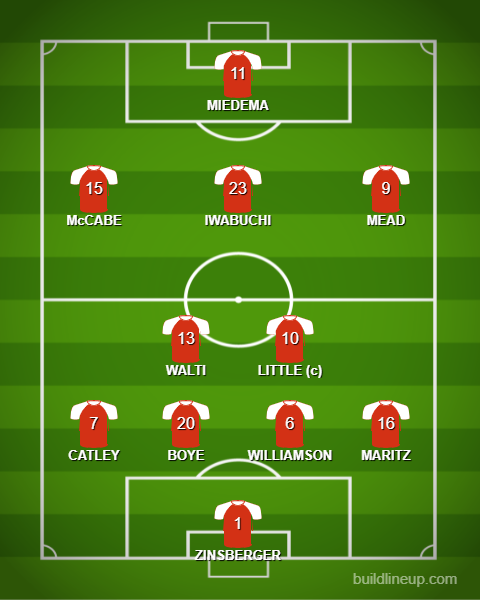 HOW TO CATCH THE GAME
The game kicks off at 7.30pm on Tuesday evening at Meadow Park. Tickets are available on the gate at £8 adults and £4 concessions, or else you can buy them online here. The game will also be streamed live by Arsenal.com.

COMING UP
We’ll have match reaction from Jonas Eidevall on the site shortly after the game, we will also have a new episode of the Arsenal Women Arsecast out for you later this week. I hope to have a player interview on the site for you this week too but I am still in the process of making arrangements!

Will be looking with great interest at women’s results this year.

That said, unless Steph Catley is a winger filling in, 7 is a disgraceful number for a left back.

It’s her lucky number, she wears it for Oz and wore it at all of her previous clubs.

I’ll try to accept it, still scarred by gallas 10 so don’t expect much.

Huge thanks for all of the content on the women’s team this summer, Tim. Long may it continue!

Seconded. I don’t always comment but I always look forward to the blog posts and the podcasts – very much appreciated.

Looking forward to the game, and glad that they are working to bring in another midfielder. At least there still seems to be some sensibility at this part of the club.

can’t remember the last time we had such a wealth of talent both on the field and the bench at the same time.

also, Tim, any hints on who they have in mind for midfield? Or do you just know they want an extra body but not who they are targeting?

I’m gagging to know, too!

Good luck, ladies! So excited for this and Sunday’s game.