THE LOWDOWN
Arsenal face PSV Eindhoven in their second Champions League qualifier in Moscow on Saturday evening for the right to graduate to the final qualifying round. The Gunners made light work of Kazakhstani side Okzhetpes on Wednesday morning with a comfortable 4-0 victory, while PSV defeated host team Lokomotiv Moscow 3-1 later that day.

Those two results have teed up a final between these two sides in the Sapsan Stadium. Arsenal will again be favourites for this encounter but PSV will still represent stiffer opposition than Okzhetpes did on Wednesday. Arsenal will have the opportunity to make some changes to the starting line-up for this game with so many of the travelling squad recently involved in the Olympic Games.

It’s time for a tour of Moscow! 🚌🇷🇺 #UWCL 🏆 pic.twitter.com/HWhsvYUMs0

Boss Jonas Eidevall was happy enough with his side’s display on Wednesday but urged his team to be more dangerous “from corners, wide free-kicks, crosses and counter-attacks.” Three of the four goals came from neat combination play, a hallmark of the team under previous boss Joe Montemurro. It is clear that Eidevall wants to add potency from more broken play to the team’s tactical arsenal.

The winner of this tie will go through to a two-legged playoff for the right to enter this season’s group stages. If Arsenal are victors, they will play one of Jonas’ former club Rosengard, Slavia Praha, Lyon or Wolfsburg in a home and away setting at the beginning of September. Before Arsenal can think about that though, there is plenty of work to get through against PSV.

TEAM NEWS
Lotte Wubben-Moy is fit to play after going with a bang to the head against Okzhetpes that required stitches. Eidevall also says that Steph Catley, Caitlin Foord and Lydia Williams will all be available to start- they were held back as substitutes for the Okzhetpes game as they went further in the Olympic tournament than any of their teammates.

Jonas also suggests that Jen Beattie will be available to start if needed having recovered from back surgery. It remains to be seen whether Lia Wälti will be able to play, a tight calf kept her from playing in the Okzhetpes game. Jordan Nobbs (ankle), Leah Williamson (personal reasons), Malin Gut (ACL) and Viki Schnaderbeck (knee) are not available.

LAST TIME OUT
As far as I can tell, these two teams have never played one another. Arsenal were 4-0 victors over Okzhetpes on Wednesday with goals from Mana Iwabuchi, Kim Little, Beth Mead and Nikita Parris. Meanwhile, PSV defeated Lokomotiv Moscow 3-1 later in the day. They trailed early on before fighting back with goals from Esmee Brugts, Maruschka Waldus and Amalie Thestrup.

THE OPPOSITION
PSV will have a very familiar face in goal, Sari van Veenendaal spent four years with the Gunners and won a WSL title, two Conti Cups and an FA Cup during her time in North London before leaving for Atletico Madrid in 2019. Other names more familiar to a UK audience include Mandy van den Berg who played for Liverpool and Reading in the WSL and it also happens to be the club where Danielle van de Donk made her name.

PSV qualified for the qualifying rounds of the competition after finishing as runners-up to Twente in the Eredivisie Vrouwen. PSV did lose two of their best players this summer, centre-half Aniek Nouwen went to Chelsea, while Joelle Smits moved to Wolfsburg. Ultimately, the lure of the big European clubs will always spirit the best young Dutch talent away.

PLAYER TO WATCH
Mana Iwabuchi caught the eye playing in the number 10 role on Wednesday, helping herself to a goal and an assist. When Arseblog News asked coach Jonas Eidevall about the Japanese World Cup winner’s performance, he purred, “I was talking to some of the staff the other day and we talked about the passes she makes in training and usually I think I am good at seeing what the next pass will be but she surprises me when I am watching.”

Her link-up with close friend Vivianne Miedema for the opening goal was a tantalising insight into their on-pitch relationship, having spent several years on the same team at Bayern Munich. Iwabuchi can play in either of the wide forward roles too but with Nobbs injured, Iwabuchi will probably play a more central role for the foreseeable future and that is exciting. 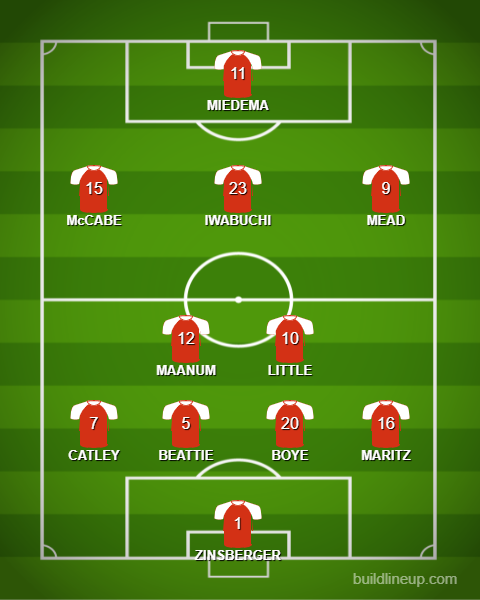 HOW TO CATCH THE GAME
The game kicks off at 5pm UK time in Moscow’s Sapsan Stadium. Arsenal.com will stream the match live free of charge.

COMING UP
We will have match reaction from coach Jonas Eidevall on the site shortly after full-time. We will also be liveblogging the game on Arseblog Live.

Previous articleArteta dismisses negativity, calls on fans to back the team
Next articleReport: Roma the latest to show interest in Torreira

Come on you Gunners

Looking forward to it. Early days but the team seems it might have got its ‘x-factor’ back through the new signings (and coach). Particularly Mana…oh, not forgetting Anna she is definitely playing for “her club”. She looks as if she would relish being asked to play in any position going, even GK!