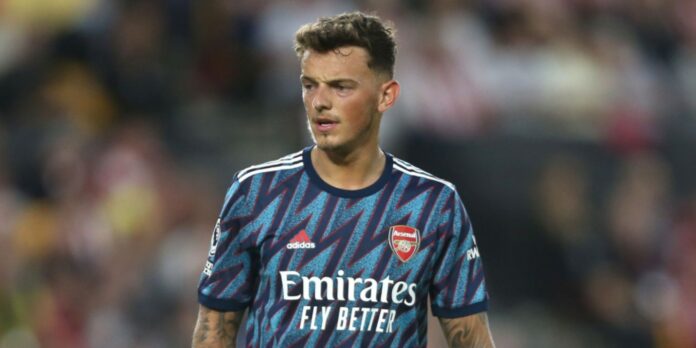 Mikel Arteta says Arsenal have to check on a few players after last night’s win over West Brom, Bukayo Saka included, and provided an update on defensive duo Gabriel and Ben White ahead of Saturday’s match with Manchester City.

Saka required treatment after he was felled by a late tackle at the Hawthorns and the England international played the closing stages of the game in obvious pain. It remains to be seen whether he’ll be fit for the trip to the Etihad.

“We have one or two doubts, from the previous game as well, we’ll know more tomorrow when we all train tomorrow,” said Arteta.

“Bukayo was limping after the match, we’ll see today how the knee reacts but he had a knock.”

The boss was also asked whether the Covid situation was under control at London Colney and when summer signing White might be back in contention.

“From Covid, we still have Ben out and Alex Runarsson who has been out. The rest of the players that are missing are injuries and long-term injuries that we don’t have back yet.

“Gabriel is getting closer. He had a couple of sessions with the team but we don’t know. Let’s see tomorrow how he is.

“Ben is asymptomatic, he’s been feeling good and as quick as we can, we’re going to bring him back to training and starting to play games with us again.”

Arteta: We have a clear project for Balogun

What about the Partey?

Hopefully back for the NLD.

Not this cycle again…

Willian ready to return then.

Don’t even fucking joke about it….

Why did Saka stay on?

Arteta always seems to hold his substitutions til it’s too late to make a difference, baffles me!

He’s got no hair but we don’t care...
Reply to  DefaultGray

I remember someone else that used to do that!

Once a gunner
Reply to  CLEGOONER

Because he has used all his sub

SirL
Reply to  Once a gunner

Nainsley Aitland Miles
Reply to  Once a gunner

2-0 up half time. Perfect opportunity to take Saka off. Desperately need him fit for City.

For the sake of White’s long term career, might it be best for him to miss the City game and have a bit longer to recover/bed in

If asymptomatic there’s really not such need. It basically means he has no symptoms of the illness.

There is really no such thing as an ‘asymptomatic’ person, that is propaganda. Either you have the flu, you are symptomatic, or you do not. The problem is the PCR test that has 95% false positives, and on top of that, it cant even differentiate between regular flu or c19. Ben is fine, this is all so crazy. God bless

what on earth are you on about

Hi Lolerinho – i’d be interested in your sources for that. I work in acute medicine seeing covid patients frequently – the false positive rate of the PCR tests are incredibly low. In addition, we are picking up many patients who are asymptomatic but can still spread the virus. This article gives a good run down on how to interpret the results of the tests. – https://www.bmj.com/content/bmj/369/bmj.m1808.full.pdf As for your other suggestion – the test very much can detect the difference between the Influenza and Coronavirus, they are two different viruses which cause the infected cell to produce distinctly different… Read more »

and now try talking out of your mouth.

Erm… can we get this comment removed on the grounds of spreading dangerous information?

A Different George
Reply to  edwardavern

Agreed. I think this is a serious problem with this comment; the last thing we need is for this site to become yet another source of uninformed rumour-spreading. (Well, unless they are about football transfers.)

I know what you mean, but I appreciate Jack Stewart’s reply and hopefully anyone who might have thought Lolerinho knew what he was talking about will now see that response.

Well if that doesn’t take the fucking biscuit, I don’t know what does.

Considering the minimal aerial threat in that City attack, it actually may be an ideal opportunity for Ben White showcase his talent without his clearest weakness being exploited. A strong performance at the Etihad will be massive for him. Even if things don’t work out like that, we have plenty of straightforward fixtures until the NLD in September to get his confidence back up should we be on the other end of a bad result. I’d definitely give him the chance.

It’s actually the type of game we’d need him most in. They aren’t going to attack him in the air and his technical skills will be needed.

Lacazette, who apparently was really quite ill, looked pretty good (actually, he looked great). So maybe White–who has not been ill–will be fit for City.

Timorous Me
Reply to  A Different George

Arteta will soon be employing a full-on “Antibody Attack” that by my estimation will be unstoppable.

Saka out of Man City would be awful but a front four of Pepe, Odegaard, Smith-Rowe, Aubameyang can still cause damage.

With Laca and Martinelli to come off the bench too. Even with some key players still absent, things are suddenly starting to look a lot healthier (in attack at least, rb still terrifies me a bit!)

Some please tell edu to bring in

Next summer or winter break we go for Lewin and Aaron

Trippier… just no. No Spurs reject cunnies in this squad thanks. Sol Campbell he isn’t. He’s also old and not quick enough for a full back.
Would rather Max Aarons than Trippier.

He upgraded from sp*rs to win la liga. Now he can upgrade to arsenal. I wouldn’t mind him as long as he plays for the badge of the biggest club in London.

Agreed. No Trippier, for a multitude of reasons, including that he is older now and doesn’t fit the profile of player we are looking for.
I can imagine the call from CAA Base to Edu however: “we heard that you are looking for a RB who is just like your Kieran T. Well I have a RB who is also called Kieran T. How perfect a match is that? Plus he is old and we know you like offering three year deals.”

I hope Saka is OK, don’t understand Arteta leaving him on while taking Xhaka off.

I think he wanted to build up his match fitness and he was looking good out there, it was just one idiotic challenge, not really a dirty game. I was really concerned though and hopefully he’s OK.

Timorous Me
Reply to  Vonnie

Yeah, I cut those kids at West Brom some slack–at times it was just too much for them, like the one who just fell over with a cramp while trying to defend in his own box near the end! I imagine this is similar to the risk you run when having a senior player get minutes for fitness in U-23 games.

At 4-0, Arteta should have taken Saka off. He is our most valuabla player.