THE LOWDOWN
Arsenal Women play their second friendly of pre-season away at Sp*rs on Sunday afternoon at the Tottenham Hotspur Stadium. Last weekend, they vanquished Chelsea 2-1 at Emirates Stadium thanks to goals from Katie McCabe and academy prospect Freya Jupp. This is the final friendly (unless a behind closed doors match is arranged in the meantime) before the team fly to Moscow for their Champions League qualifier against Okzhetpes.

Last Sunday, Arsenal’s first teamers played for 60 minutes before being replaced by the academy players, it’s likely that the senior players will get a little bit longer at the Tottenham Hotspur Stadium to put them through their paces before completing a gruelling August with Champions League qualifiers.

This will also be the first time that new coach Jonas Eidevall will be in the dugout for the Gunners, he took the team remotely last weekend as he observed quarantine rules following his move from Sweden. He will hope for no new injuries after last weekend saw Jordan Nobbs injure her ankle following a challenge from Erin Cuthbert.

The players who competed at Tokyo2020, with the exception of the three Australians who played in Thursday’s bronze medal match, are back with the club. They will likely form part of the travelling party for the qualifiers in Moscow but it seems likely that this game will come too soon for the Dutch, British and Japanese players.

TEAM NEWS
Jordan Nobbs will miss this match after injuring ankle ligaments in the Chelsea friendly, though a timeframe has not yet been publicly shared on her recovery. Jen Beattie and Fran Stenson were not considered fit enough to form part of the squad last Sunday despite both returning to full training following back and thumb surgery respectively.

Lotte Wubben-Moy, Leah Williamson, Kim Little, Vivianne Miedema, Nikita Parris and Mana Iwabuchi are back in London following their exploits in Japan but are unlikely to be involved. Steph Catley, Caitlin Foord and Lydia Williams are not back in the country yet after representing Australia in Japan. Malin Gut (knee) and Viki Schnaderbeck (knee) are out.

LAST TIME OUT
When the teams met at the Tottenham Hotspur Stadium back in March, Arsenal ran out comfortable 3-0 winners thanks to goals from Caitlin Foord, Vivianne Miedema and Katie McCabe. They also won at the stadium back in November 2019 with second half strikes from Kim Little and Vivianne Miedema.

THE OPPOSITION
Coach Rehanne Skinner joined half-way through last season after long-standing joint managers Karen Hill and Juan Amoros were relieved of their duties. Tottenham finished 8th in the WSL last season but really struggled to score goals- 27% of their 18 strikes emanated from Siri Worm set-pieces and Worm left for Eintracht Frankfurt. Nobody scored more than twice for Tottenham last season.

Straight to work for our new arrivals 😤 ✊

They have undergone some surgery on the squad this summer, with Worm being joined by Alana Kennedy, Rianna Dean, Gemma Davison, Lucia Leon, Chloe Peplow and Lucy Quinn. Former Arsenal forward Chioma Ubogagu should bolster their attacking options, with Cho So-hyun coming in from West Ham, Tinja-Riikka Korpela arriving from Everton and Molly Bartip from Reading.

In reality, Spurs will again bid to be floating just above the sides that will battle it out for relegation and they would consider another 8th placed finish a success. They have to fix their goal scoring issues to do so, though. Tottenham have yet to defeat Arsenal in a fixture, competitive or otherwise and Arsenal will be big favourites for this game too.

PLAYER TO WATCH
Katie McCabe scored in this fixture last season and she was on the score sheet against Chelsea last weekend, playing in a more advanced left-wing position. Against Chelsea, McCabe and Nobbs caused havoc overloading the left-flank with Noelle Maritz at left-back and McCabe helped herself to a goal from a Frida Maanum cutback. 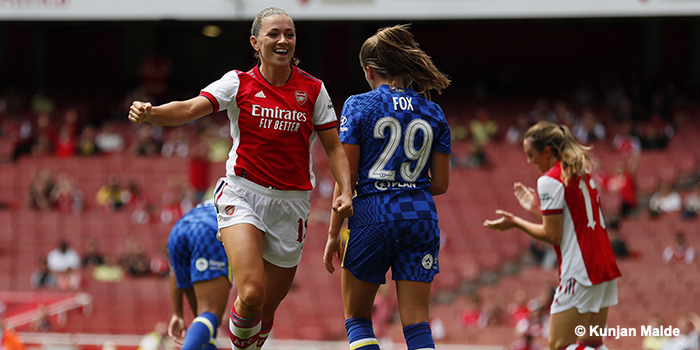 McCabe deservedly won Arsenal’s Player of the Season award in 2020-21 and signed a new deal with the club in April. If her performance last weekend was anything to go by, McCabe looks determined to enjoy another stellar campaign. With Steph Catley creating more chances than any other player at the Olympics for Australia, we might get a see a left-side with McCabe and Catley in tandem.

It was also notable how McCabe encouraged the academy players last weekend. As Nobbs lay prostrate on the turf, McCabe jogged over to substitute Halle Houssein to give her a pep talk. She also high fived each academy player one-by-one as they entered the field on 61 minutes. Katie seems to be relishing her role as an emerging leader in the squad. 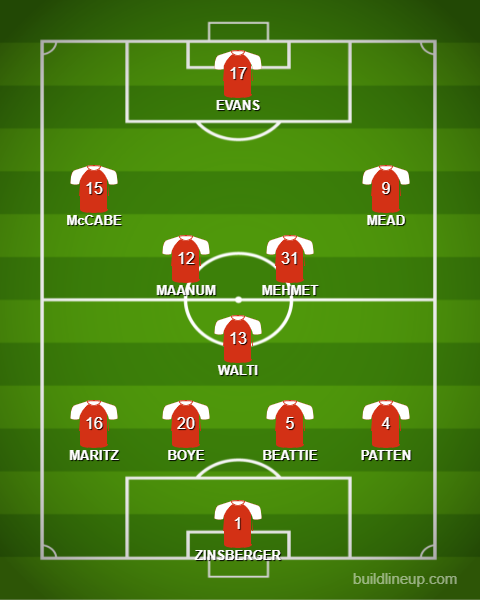 HOW TO CATCH THE GAME
The game kicks off at 4.45pm at the Tottenham Hotspur Stadium following the match between the men’s teams. The game is viewable by buying a match pass on Arsenal.com for £7.99. The match pass gives you access to both the men’s and women’s games.

COMING UP
I cannot make the match on Sunday but my colleague Andrew Allen will be covering the match for Arseblog News. We will have match reaction from coach Jonas Eidevall on the site on Sunday evening courtesy of Andrew.

Spurs have newly signed Kyah Simon, the Australian player who clashed with Kim in the Olympics Quarter Final, resulting in her substitution which in my opinion cost Team GB the match – “say no more” as per Eric Idle (Monty Python)

The media team have certainly seized on Katie’s
rising profile in the squad and rightly so. She has definitely atoned for her involvement in “Dubaigate”.
The lack of any further updates regarding Jordan’s injury is concerning.

Interesting line up choice, Tim.
In my head Lisa is an established winger and Meado is an established centre forward forced to play out wide because of who we generally have in the centre. Yet with a gaping chasm in the middle you would still put Beth out wide with Lisa as the striker?
If Fran is now fit why don’t we give her some game time in a nonsense game? Do goalkeepers really need match fitness in the way that outfield player do?

I was also surprised last week to see Lisa as CF. It will interesting to see how Jonas sees attacking positions pan out during the season. We have a lot of options. For me out of Beth or Lisa, I would 100% prefer to see Beth as CF, but same time in a long run, she probably has better chance to start games as RW, because Viv obviously, but also Caitlin and Keets as ST ahead of her. Honestly I have hard time to see a position where Lisa could start for us, specially if Steph can stay fit and… Read more »

Her best chance is Mana being seen as more of a 10 than a wide player which could happen given how light we are in that position otherwise. Even then, as you say, there’s plenty there and Anna seems to be considered as a RB now.

Yeah I think Lisa will be ok early season because we will need squad rotation to get through all the games but as the fixture list eases she may find herself becoming an impact sub playing the last 15 or 20 minutes of a game when some fresh legs are needed.

The line-ups are what I think the manager will do rather than what I would do but since Lisa played there last week, think it’s reasonable to assume she’ll continue there. Beth very much sees herself as a wide player now.

I think she has been hypnotised by Joe and Numpty Neville! 🙂

Arsenal Women v S???s: no matter the result, I for some reason won’t be stressed. Why is that?