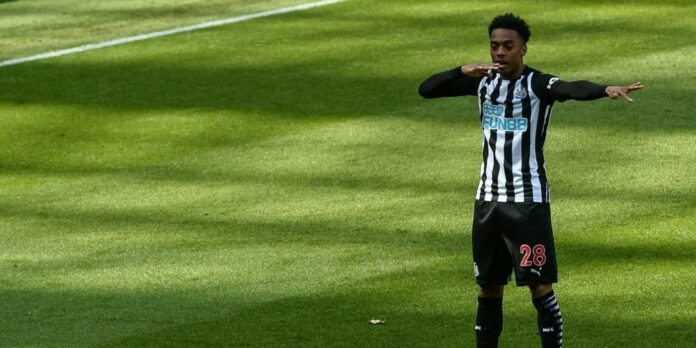 Joe Willock was quick to thank Arsenal after securing his £25 million move to Newcastle.

A Gunner since he was four and a half, Willock came through the ranks at Hale End to make his senior debut at just 17. He went on to make 78 appearances for the first team, scoring 11 goals and making four assists.

He moves to St James’ Park after a successful loan spell during which he scored in seven consecutive games.

While it was difficult for both Joe and Arsenal to part ways, it’s understandable that the 21-year-old is excited at the prospect of becoming a regular Premier League footballer at a big club.

“I’m buzzing to be here,” Willock told Newcastle’s official website. “I loved my time here last season and I’m really happy to be back and to be a Newcastle United player.

“Leaving Arsenal is obviously a big step, and I’d like to thank everyone involved with the club for all their support over the years, but this is the right move to the right club at the right time for me.

“I only got one chance to play in front of a smaller number of Newcastle fans as a home player last season, so I can’t wait to step out in front of a packed St. James’ Park and experience that atmosphere.”

Willock could be one of a number of academy graduates to leave Arsenal this summer. Eddie Nketiah, Ainsley Maitland-Niles and Reiss Nelson are currently on the fringes of Mikel Arteta’s squad and are known to be assessing their options.

Arteta: Willock has given himself options

They obviously rate him highly..Good luck to the lad

Rightfully so, he proved himself with them and their team was dramatically better than before he arrived. The team and the fans absolutely love him, his character, his workrate and what he brings to the team with his unique footballing attributes. Pity we place so little value in so many of those things.

No, that would be Newcastle valuing them that highly.

Hollywood passes are what we value around here. How else can we explain the infatuation with David Luiz and Xhaka despite their many shortcomings.

If you can ping a 40-yarder, who cares if you are slow, error-prone and have a poor disciplinary record.

If he gets relatively close to his form from last season. Any club looking to take him from Newcastle will have to pay some serious money because of the contract length.

Can I say, I am really sad that Joe has gone… I know the guy who scouted him and we were chatting this morning about how poor a decision that was given some of the players we’ve opted to keep. And listen, I understand the reasons why we sold him, on paper he was the only asset we could actually get a decent fee for. But that’s not really Joe’s fault, and its not really a good enough reason (in my book) to sell a young academy player who has been at the club his whole life, and genuinely offered… Read more »

Good luck Joe! All the best!

Massive disappointment to see such a quality academy product prove himself and then be tossed away. I guess we learned nothing from Emi Martinez. Same price. Same story. Same Ol’ Arsenal: selling our quality assets, and offering our dross we can’t move coushy new 4 year deals.

Yep. Before Willock, there was also Ismael Bennacer. He had a memorable loan and was gone the following season.

They say “you can’t keep them all” but shouldn’t that also applying to those clogging up the 1st team?

Sad to see Willock go. It’s a severe indictment on Arsenal Academy and coaches including Arteta that they never understood the player who was with them from 5 year old. Bruce could get the best out of him in half a season whereas our coaches had the best part of 20 yrs. Absolutely pathetic.

We should have kept Willock, and traded Arteta with Steve Bruce. Then we should play exactly like Newcastle and Williock would score every game!!! Then we sell him to Man City for $150Million next season.

Did you guys know about this deal when laughing at Kane/Spurs on Thursdays pod?.

Sad and disappointing to see him go but happy for him, hopefully he keeps on at Newcastle as the main man. Good luck Joe!

Yeah, I’m going to miss Joe. I hope he continues his goal-scoring ways and becomes a highlight reel regular for Newcastle; we should be proud of him. He’ll always be a Arsenal man at heart.

Really frustrating but if he doesn’t fit with the system then he doesn’t. We say ESR has the creating but needs to add goals well I don’t see why we haven’t kept Willock as having the goals and needing to add the creativity.
Hoping youth gets a chance up front tonight and a big performance from Sambi in midfield.

Incompetent and lacking vision! One of the most damaging moves to the club in the market in a series of transfer mistakes over the years.

Of the youth players yet to confirm his status as a first team regular, Joe Willock was both the most likely to do so and the most valuable asset from a group of Martinelli, Nketiah, Nelson, and Balogun. His midfield goals at Newcastle were mischaracterized by some as “8 flukes in 15 matches”…nonsense. We need not only goals from midfield but goals period. Selling Willock was a terrible mistake.