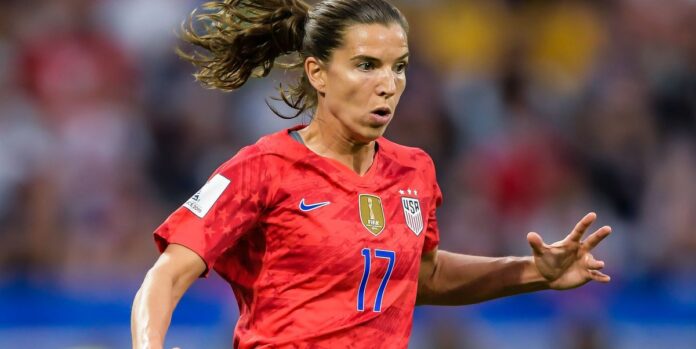 Heath is considered one of the biggest stars in the women’s game and has 177 caps for the US National Team. Arseblog News was told earlier this week that a deadline day signing was not beyond the realms of possibility but we weren’t given a name.

Former Gunner Anita Asante told Sky Sports News on Thursday that a deal might be in the offing, which was subsequently backed up by the Athletic’s US Women’s Soccer Correspondent Meg Linehan. Having since made a line of inquiry, we are told a deal is very close.

A source has confirmed that Tobin Heath is signing with Arsenal, though it's not quiiiiite across the line yet. More at @TheAthletic:https://t.co/gPmVN6lxSm

In terms of profile, it’s an enormous signing that will bring a lot of interest from the US, where Heath has been a household name for many years. Tobin is also a big Arsenal fan.

What do you think of her Tim? I mean we’re desperately need a central midfielder

This is exciting! Yes we have a lot of good players in that area. But we want to be competitive as hell and watching City and Chelsea take up everybody gets frustrating. We admire their benches and feel it’s ‘dependable’ they sign the big names once they’re free. Maybe it’s Jo as, but I love seeing a scary bench for us. Sure it’ll mean someone like Beth or Caitlin might not play as much. But they are pivotal for the team and we can be seriously dangerous for any team out there if we sign Tobin.

Well, as a US Arsenal Fan, I’m thrilled with this! A tricky and intelligent playmaker who on her day has been just as big a star as Rapinoe, Lloyd, and Morgan for the USWNT. I was gutted when she signed Man U (although not as bad as Morgan at Spurs) and thrilled she’s coming to the club she supports!

Yea, I agree that the Gunners need a midfielder more than another winger. I mean, Heath will be a plus, for sure–the midfield depth issue remains.

Agreed. Not sure when Nobbs is coming back, but we’re super short in the CM department. I suspect we’ll see Williamson or Patten step up into midfield and

I would guess there’s going to be a shift in formation (or a player playing in a different role) to alleviate the midfield, and maximize the winger depth the squad has, unless there is one more signing in the wings.

I’m just switching off my brain for a sexcond to say, that I was dreaming about this move more on terms of my own fanship.
I did not expect this to materialisze. But I still have to say, that makes our squad a bit bloaded offensively. A bit much. But as a Heath fan I have to say: I’m excited.

But I still agree, that a Lia like midfielder would be needed. But I think in that case Leah would probably step in. But I would not totally agree, that that would be our wisest choice. We would probably rotate to a formal back in that case with 2 in midfield, though Leah would practically be a midfielder in posession. I think, that move (a formal CB playing further forward in posession) will be quite popular in the near future. Just my guess.

btw. Tobin is a gooner way back and even featured on the official Arsenal page. https://www.youtube.com/watch?v=nFywjOSSeaA

Another reason for me to shift more focus to the Women’s team. Always excited to see an American lineup for Arsenal.

Anyhoo, welcome to The Arsenal, Tobin! One of the most feared forwards in the world and a Gooner to boot.

Viv The 🐐
Reply to  Elise

Exactly my way of thinking 😅 I’m still refreshing Arseblog every hour to get more information. It is getting out of hand by now.

I’m excited for this – as well as being a brainy, technical player, she brings some swagger, power, and directness that should really help Arsenal against the top teams – I suspect Miedema might really benefit by having Heath in the team

Wow! She was sensational for United last season before being injured.
A hugely dynamic, direct and effective attacking forward.
Who said all the U.S. stars have abandoned the island of GB?

An interesting signing. It is good to have another top-class international in the team. Also it will raise Arsenal’s profile, especially in the United States. My main concern is the effect it will have on Beth Mead. She’s looked sharp since having a bit of a break over the summer – what a great ball to Viv for the third goal against Slavia Prague. With Tobin Heath in the team, her minutes on the pitch could well be reduced. But, in the end, it should be our opponents’ defences who are most worried!

As a US fan this is particularly exciting! Tobin has been such a consistent star at all levels, and will hopefully be huge for women’s soccer here. It’s much easier to access UK games for women, so hopefully this will help with viewership as well

The kind of player you’ve got to sign if given the opportunity, as for midfield I guess Katie mccabe Is back to full back and we’ve seen Anna Patten and Noelle Maritz play midfield before haven’t we, certainly gonna be good problems selecting a front 3 this season

Bit of an odd one really. Do we really need her? Perhaps a move wanted by the ownership. Of course a useful addition especially with more games but she is, like any aging playing, definitely on the decline from a few years ago. OK with MUFC last year, not great at the Olympics.

No we probably don’t really need her but when someone with the charisma, skills and experience, not just on the pitch but off pitch too, becomes available basically for free snap them up!
We want to beat City and Chelsea so we need a squad like City and Chelsea. I’ve had enough of them signing decent players knowing full well they shall be bench warmers just to stop other teams benefiting from their services and we end up third 10 points behind again!
Tobin even supports the Gunners ffs!

the fact we have Leah, Mana can also drop a little bit into midfield, then Nobbs, Kim, Lia and others are there. The fact that asides Chelsea, both Manchester sides, other teams can be handled without much fuss, so Tobin is an added advantage tops with the others.

And no one has mentioned Frida at all! You know the new midfield signing who has been awesome in the last couple of games when Lia was missing!

Still hope we are looking at a midfielder?

Well, she cant do worse than Willian, can she?