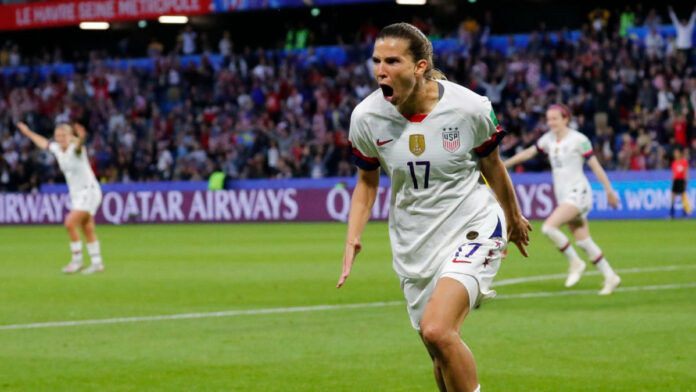 Arsenal Women have confirmed the signing of two-time World Cup winner and two-time Olympic gold medalist Tobin Heath on a free transfer. The 33-year-old spent last season on loan at Manchester United but left the club this summer.

She joined United on loan from Portland Thorns in the NWSL and in November 2020, her rights were traded from the Thorns to Racing Louisville FC. However, Heath wanted to stay in Europe to play Champions League football and having been an Arsenal fan of many years, Arsenal was deemed the perfect fit for the USWNT star.

Heath is one of the most high profile players in the women’s game with 177 caps for the USA. She typically plays on the right-wing and will compete for a place with Beth Mead and Nikita Parris. Tobin will wear the number 77 shirt.

Heath is the highest profile signing of the summer in the WSL. She will not be ready for the game against Chelsea on Sunday at Emirates Stadium but she did compete at this summer’s Olympic Games in Japan, so she ought to be in good condition to make her debut soon. The Gunners take a 3-0 first leg lead to Slavia Praha on Thursday in their final Champions League qualifier and play away to Reading on Sunday, 12th September.

We will have a special edition of the Arsenal Women Arsecast coming out later on Friday to discuss the signing.

Welcome to YOUR club, Tobin!

Like most people, I am worried we didn’t sign another central midfielder, but Eidevall does look like a man who’d get a CM if he didn’t have an alternative plan. So I’d trust him.

Lia becomes so much more important to this team now and has to be protected.

But look at that attack: Heath-Miedema-Parris with a supporting cast of Little, Iwabuchi, Nobbs — it’s a beauty! Really excited for the new season. COYG

Honestly Leah as Lia’s “backup” is absolutely fine and we have more than enough CB’s to cover for Leah there. In lesser games Frida/Anna can both cover for Lia. I wonder how he sees Viki. From what I have read so far, he seems to have very concrete ideas how he sees players positionally.

Yeah, I think the fact that both Leah and Anna can play in midfield stayed his hands.

Just my guess – Viki will be the utility defender/cdm. I think she performs best when dropped in now and then rather than in a long run of games, anyway

GOYG! Nothing beats a signing of world class player who is also fan of the club.

Our very own Tim Stillman is name dropped and extensively quoted in this article on Skysports about Kelly Smith:
https://www.skysports.com/football/story-telling/11670/12393074/kelly-smith-arsenal-footballs-cult-heroes

Yep… read this and had a “Tim is an absolute legend, now” reaction. Great read, too.

Definitely the WSL marquee signing of this window!
With no disrespect to the Academy players I’m glad to see we are now building a squad where rotation doesn’t mean losing quality and experience. We are going to need that certainly for the first couple of months this season!

Honestly given the short contracts in womens game it may not be possible to build “project youth”. I was very positive about our last summers “project” talk, but in reality both Malin and Jill (who at that point were the youngsters we built for) are gone year later. Coach who wanted to develop them are gone. Only project that can be successful in the future has to also be successful now. Our world class players deserve to be competing for the CL not to be part of the project that sometime in the future can compete. Heath almost gave ManU… Read more »

Agree entirely. Joe always seemed to be talking about tomorrow when we need results today! You cannot afford to drop points in WSL. 0-0 vs Aston Villa who to me were the worst team last season even though they escaped relegation through that result a prime example. Have to admit I didn’t see this signing coming but with the players that have come in this window I feel that it has relieved the weight of expectation on Viv’s shoulders to score the winning goals in every match. I think with the many others that we now have sharing that burden… Read more »

Not sure you can argue what Man City pay anyone in any of their teams is the going rate! They have just tried to buy themselves success because they can. What it has done is open up the chasm between the top 3 or 4 clubs and everyone else who cannot attract the top talent. This is the huge downside to “sport”, not just football, when capital investment is allowed in.

I don’t know Rubys reasons financial or not. What I know is that City’s CB options for this season are one year older Houghton, LB Greenwood, barely a CB Kennedy. Arsenal’s when she left were Leah, Beats, Lotte, Anna, Viki who all were ahead of her. Resigning Anna and Lotte meant that Ruby won’t have chance at Arsenal. We already have young homegrown CB’s coming through, City don’t have.

Apart from Greenwood and Kennedy at 28 and 26 respectively, they have Esme Morgan and now Ruby but all of their other defenders are 30 and up. In fact City have quite a lot of 30+ year olds throughout their squad so perhaps they need to invest in some youth!

We look overstocked in attack and defence…but then you remember about injuries! Plus JE’s all-action style will require more than Joe’s way of playing.

I’m officially uncertain of who my favourite player is. Vivs exclusive “playing for Arsenal” Bonus is no more. To quite Tobin, the feeling right now is pretty “sweet”. I think I have never been that excited about any signing in the history of ever. Amazing. I was thinking all of summer that 1 (Tobin beeing an Arsenal fan) + 1 (beeing available) should be =2. But it felt too much like a dream. I just hope, that injuries will not hinder this beauty of a move. That is the “adding experience to the squad” thing done right. It also sends… Read more »

And I didn’t even know that there are so many Pictures of her around the Emirates. Thank you Tim for sharing that. I’m just ying at the moment. This is the most excited I got for a signing since forever. Now I’m excited for the season.
Up The Arsenal!

I’m buzzing now. I haven’t been this blown away by a signing since we recruited Miedema.

Yi-Yiiiii! What an incredible player and a brilliant signing. It’s marquee, it’s moral boosting, it’s guaranteed to grab headlines and it’s easily the best deal of this transfer window (step aside Vicky Losada). I couldn’t be more excited for this season! A front three of Heath, Viv and Parris (you’d have to fit all three in, surely?) with Little, Mana and one deeper CDM behind them would be amazing. So glad that at least one of our teams is still being run well (seemingly at least) and knows how to do good business in the transfer market. My only concerns… Read more »

Again Frida under the radar!
She has a massive contribution to make to this season.
Have you not watched the CL games so far?

I hope this makes Leah Williamson happy. She wanted s commitment from Arsenal to progress.

I think it would be useful to separate the AW and the Arsenal news completely.