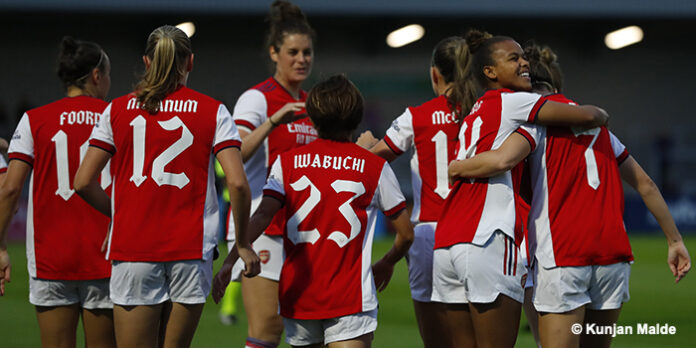 Arsenal Women have been drawn in Group C and will play the current holders Barcelona, German side Hoffenheim as well as HB Køge of Denmark in the group stages of the Champions League. The Gunners qualified after finishing 3rd in the WSL last season and then defeating Okzhetpes, PSV Eindhoven and Slavia Praha in the qualifying rounds.

Arsenal won the competition in 2006/07 and got as a far as the quarter-finals in their last sojourn in the competition in 2019-20. This is the first time that the Women’s Champions League will have a group stage during the autumn and all of the matches will be shown for free on DAZN’s YouTube channel.

The match schedule is to be decided but the dates are set out below:

Barcelona match has got to be at the Emirates surely?!!! #COYG

How many teams qualify from the group? Top 2?

Phew 😅 I mean, I hope we top the group or at least take some points from Barcelona, but still, that is a relief to know!

Exciting! I might try and go to the away Køge game, not too far from me in København.

Great news for the Danish Gooners!
Rødovre is also near!!!

Well my first preference would have been not play Barca so soon into our new project, but here we go. We signed Heath for games like that. We have players who should relish games like that. I hope Arsenal will make massive occasion out of the home game against them. Arsenal vs Barca under the light at the Emirates. I haven’t seen Hoffenheim play this year, but have seen comments that they have been very good, so not an easy opposition also. And a thought for Joe who surely hoped to escape the Chelsea ghost only to meet up with… Read more »

What better time than now for Joe to break the hoodoo?

Hoffenheim lost key players to bayern and wolfsburg. Slow start so far in the league, but can still dangerous as seen from their 3-0 win over rosengard.

Be interesting to see how Juve playing the Joe way get on against Chelsea.

Seeing that draw, the first thing I thought was that we need our injured players back fit. I am happy to get Barca in the group stage. At worst, we’ll learn from having lost to the best team in the world. And assuming we get out of the group, we won’t have to face them in the first knockout round, and I would give us a good chance against any of the other teams who we might expect to reach that stage, so we are more likely to progress from there. It’s actually quite a good thing to be in… Read more »

I don’t see any reason at all to fear Barcelona, given our new management, new signings and excellent start to the season.
10 of our squad are fresh from performing on the “greatest show on earth” i.e. the Olympic Games, where Spain were absent, whilst Beth, Katie, Frida, Lia & the rest of the squad will relish the opportunity to face and perhaps beat the reigning champions!

goin by the recent wonderful results something in me just feels very positive about winning the competition.

If that happens, it will be a massive indictment of Joe M’s time here.

Fear not! This seems like a good draw. Viv, Kim etc al will thrive under Jonas and what better opposition to pit against than Barcelona?
I’m sure the team would far prefer that than a Conti Cup group game against Millwall….oops LCL!

If we want to be at the top then these are the sorts of games we have to expect. I’ll be very interested to see Hoffenheim. Something my Dad and I used to do was trying to spot up and coming young footballers. I watched highlights of a warm-up game before the Olympics between Germany and Australia. In that match Jule Brand came on as a substitute for her international debut. Within minutes she had torn the Matildas apart with a goal and an assist (final score 5-2). She’s still with Hoffenheim so don’t underestimate them. I’m really looking forward… Read more »

You obviously have not read Tim’s piece above which answers your question.

Just reflecting with satisfaction on the start to the season whilst watching a re-run of the opening WSL game of title season (5 -0 v Liverpool, Viv hatrick). An observation from one of the pundits stuck in my mind “fantastic football from Arsenal’s best 11″ ( Leah was actually missing that day)” but they haven’t got a strong enough squad to compete with Chelsea or City”. Well, we did!!! Fast forward and with 3 injury ravaged seasons in the interim that nagging little doubt is lurking in my mind. With the addition of Tobin, the loan out of Lisa and… Read more »