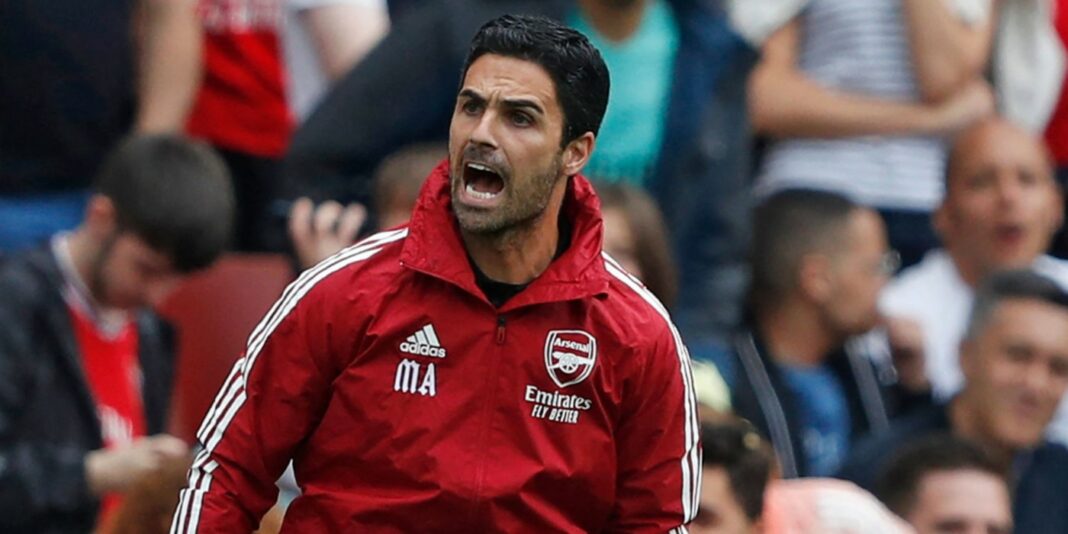 Sunday’s north London derby will be the first with supporters in full attendance since 1st September 2019; more than two years ago.

It’s set to be a barnstorming occasion between a couple of sides still trying to find their feet this season.

Having played in classic north London derby matches of yesteryear, Mikel Arteta is looking forward to a fiery atmosphere.

“It’s the most special game of the season at home, that’s for sure,” he told his pre-game press conference.

“It’s a London derby and emotionally, it’s a different one to play. We know how much it means for our supporters.”

He added: “To be fair, I can’t wait to have that experience. Even right now, after such a long time without them, I have experienced some London derbies but without supporters, and I am saying supporters because I think that is the word to describe the people who are behind our football club.

“What they have done in the last few weeks has been pretty special, they only want what is best for the club and it is very different to just being a fan.

“A fan and a supporter behave in different ways and what we have experienced in the past two games is pretty unique and is related to our history, its people who respect and want to promote the values that have been instilled in this club by many people who have been in charge here.

“It is just a privilege to see how they are able to understand, the intelligence they have shown because it comes from the knowledge that they know about our history, they know what we want to do, what we want to achieve and they are fully behind the team.”

Ultimately, while we as supporters can do our bit, on the day it comes down to the performances of the players. In the nineties and noughties, Pat Rice used to collar new signings in the week before kick-off and slap them around a bit until they were in no doubt about the need for the win. While we can’t see Steve Round and Albert Stuivenberg doing that, the boss made clear, his players will be up to speed with why a big game is needed.

“You have to play that game with a slightly different skin. There is a little bit more at stake.”

When Arteta faced the media ahead of the Norwich game two weeks ago, the Gunners were bottom of the table and Sp*rs were top. Should Arsenal win by a couple of goals on Sunday, we’d overtake our neighbours who have hit a sticky patch of their own under Nuno Espirito Santo.

“You have to be able to see things with perspective, not lose focus, try to adapt and get he best out of yourselves in every single game, because the dynamics can change really quickly before you know it.

“We are in a good place to face Spurs on Sunday. But that’s it – after that we have to show what we can do on the pitch.”

Mash them. Roast them. Fry them. Steam them. Boil them. Make them into croquets. Or dauphinois. Or chunky chips with lots of salt and Mayonnaise.

This derby is making me hungry.

ChicaGOoner
Reply to  Azeez Is Good

I read the first part of your comment to the tune “Technologic” by Daft Punk. Is there a chant in there, somewhere?

Papigooner
Reply to  Azeez Is Good

It Is What It Is
Reply to  Papigooner

Time for some destruction & to show the league what an injured animal is capable of doing when every hope is lost!

’My Generation’ (The Who)

*Roger Daltrey is a Gooner.

Arteta and his captain Tierney have both played in the derby. They’ll know how to approach this one. I just pray that eagerness doesn’t turn to rashness. We need 11 players on the field for the entire 90. We’ve historically struggled against Nuno’s teams and he’s quite defensive so it’s going to be a bit more cagey and tactical than usual I think. If we can restrict both Kane and Son it’s ours. They are the only players of any real danger. But that will be very difficult. I hope we win. But I genuinely have no idea what either… Read more »

A M
Reply to  David C

saka on the right, pepe can play on the left too, maybe for increasing midfield solidity we could add sambi there
nonetheless am looking forward to this match, north london is red
COYG

BillyKrystal
Reply to  A M

I do like the idea of Pepe on the left. He had a few good games there end of last season. I can see him creating a few chances for Auba who’s been feeding off scraps.

A M
Reply to  BillyKrystal

possibly, or maybe we could drop pepe for esr, esr started on the left in the 2-1 nld win last szn and played really well there

Daveo
Reply to  A M

Best balance between attack defense, directness and possession IMO. The choice of which key player to leave out comes down to Pepe or Auba. We need the strength of the double pivot against those Sp**s maggots – they’re too dangerous on the break. Their (Konga-Partey) ability to turn players and drive forward and transition quickly will be key too.

I’d be happy with this. If we needed goals late* could switch Lokonga for Lacazette, with Partey / Odegaard-ESR / Saka – Laca – Auba ahead of the back five.

Yes I prefer Auba centrally, but you can’t deny what Laca brings as well, and along with this lineup I’d want Auba staying closer to the center, not hugging the touchline.

This is our best 11 of the future, and it is clearly Arteta’s team. I strongly suspect however that Sunday he will include Xhaka alongside Partey in a 4-2-3-1. My guess is Odegaard, Saka, and Pepe (and not Smith Rowe), will start with Aubameyang ahead. I think I would risk having Partey, Odegaard, and Smith Rowe all start, but I do understand why that is a big risk.

We need more than one strong midfielder Vs nunos 3 tanks.
Sambi in for Pepe to partner partey. ESR MØ saka in a 3

No one’s going to want to hear this, but Xhaka should start. Him and Partey have worked well together on the rare instances they’ve been both available, and they will give us a lot of solidity and ball-playing from deep. With decent defenders behind him and a great partner, Xhaka won’t be so exposed, and can stick to what he’s actually good at (passing). Ahead, I would start Saka, Odegaard and ESR. Pepe is too wasteful against a team likely to sit deep; he doesn’t control the game at all. Bring him on as an impact sub if we need… Read more »

I echo your assessment. I would add Laca instead of Auba in tight space for intricate passes.

You’re talking about Sp**s wanting to sit deep and then talking about playing Xhaka – a players whose biggest limitation (among quite a few) is his immobility and susceptibility against counter attacks. Xhaka can be a useful player on a team that sits deep and then looks to counter through his long passing (Sp**s, you interested in a slow, slightly crazed, overrated swiss midfielder?), but against those teams he’s shown time and again he’s a liability. No thank you.

You might find @stillberto’s opinion on Xhaka/Partey an interesting counter argument to your thoughts. He makes it out to not be as cut and dry as you might suggest Daveo.

Ps: Is that pronounced Dave-Oh (in a hyper masculine way) or is that Davieee-Oh (in a private school boy sense?).

He was spot on in every aspect of his comment lol

Let’s celebrate with them, they deserve it!

I’d be pretty worried if they didn’t.

No xhaka for this one please 🙏

And the next one, and the one after that, and…

Kill them, kill them all. The Middlesex Scum.