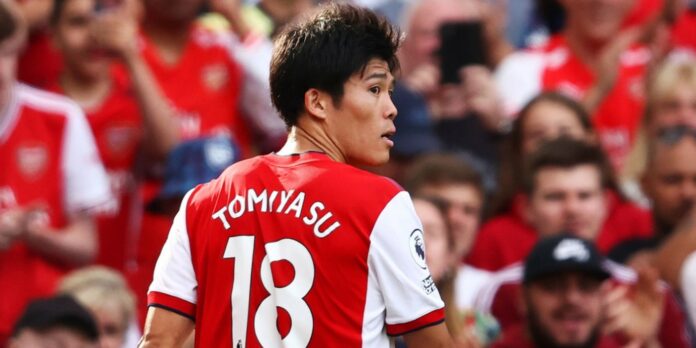 Late on transfer deadline day, Sky Sports News’ Tweedledee and Tweedledum, Kaveh Solhekol and Dharmesh Sheth had a bit of a chuckle at Arsenal’s expense when the former read out an apparent message from a player agent about new right-back Takehiro Tomiyasu.

“I’ve just got a message to say: ‘Tomiyasu was offered to most clubs in the Premier League. He’s a good player but the problem is he’s not really a right-back, nor is he a central defender. I’m not sure how he will get on at Arsenal’.

“So that is from one of the agents who tried to find him a club.”

God, this banter era is the greatest of all time pic.twitter.com/iebPMh8FGd

The general gist was, “LOL at Arsenal, they don’t know what they’re doing” and it was greeted with wry smiles and laughter on screen from the pair.

It was all a bit pathetic, especially as Tomiyasu quite clearly had played in both positions for former club Bologna.

“Can I ask you about Takehiro Tomiyasu who has been so impressive, what have you made of his performances. He was obviously a player that Spurs were interested in signing this summer.”

You have to admire the straight bat he’s played there. *insert eye roll emoji*

Arteta’s response: “First, more than the performances, it’s the way he’s settled, the way he’s gained everybody’s appreciation, the way he is…and then, yeah, he had no time to prepare against Norwich and then a proper Premier League traditional game at Burnley where I think he was exceptional.

“He had to go through some difficult moments because they really test you but I think he did that with pride and who he is, always fully committed and focused.”

Sadly, the boss didn’t add anything else, but we suspect he might have been thinking, “How do ya like them apples, Kaveh.”

We know we certainly were.

We needed real solid characters for a long time. Really willing to put in the hard work.

Yeah, our new back five seems to have plenty of them, which is indeed great. Can’t wait to see them after playing 15-20 games together!

Proving a Sky pundit wrong has to be one of the best things in the world. Kudos to Edu and Mikel.

And fingers crossed Tomi has another great game on Sunday, and Emerson Royal another miserable performance, that would make all this even sweeter.

Reminds me of when we signed Sagna and they got Kaboul

Yeah, I still feel like this was a bit of a, not panic buy, but last minute decision.

I felt at the time it might have been a bit of an Andre Santos signing. But I’m pleased to be proven wrong and, although it’s a small sample size, he looks like a thoroughly useful player.

I’m still unconvinced he’s excellent (cue litany of downvotes) but I think he’s comfortably our best RB at the club and someone who can absolutely improve us in the short term.

And even if we did upgrade on an RB sometime in the future, Tomi would be excellent cover for both CB and RB positions.

“I’m still unconvinced he’s excellent.” What, after two matches, you haven’t made up your mind? I bet you foolishly didn’t write Ben White off after his first match–anyone could see he is too short and will never win an aerial challenge. If only we had Saliba, who I have never actually seen play, but am convinced is at least as good as, okay maybe not Maldini, but certainly Van Dijk.

I’m pretty open minded about all our players. We don’t have any bonafide world class players in our side. No one would say that Auba is anymore who isn’t an Arsenal fan. And Saka isn’t there yet. So they are all in that middle bracket. And it’s almost 100% that one of the people we think are amazing now turns out to be shit. It could even be someone we love like ESR. I’m not saying he is or will be. But you never know. Players can perform above their ceiling for a few months. What I try not to… Read more »

It totally is man. I’m a bit worried about Martinelli. I really hope he kicks on. He feels a bit stagnant at the moment and can’t get momentum due to lack of game time.

Fully agree. I even suggested the exact same thing the other day – January loan. He just seems like one in particular that doesn’t fit with Arteta’s very tactically rigid system. He seems to have lost that natural flair and instinct as he struggles to conform to being in the right places at the right time as Mikel very clearly likes his players to do.

Let’s hope he continues performing at this level – and the team performs well with him.

Mustafi and Kolasinac started their Arsenal with MOTM performances until they had their first poor patch and everything went downhill after that.
Mustafi, especially, was hailed as the ideal partner for Mertesacker.
I’ll hold my praise of Tomiyasu until he has his poor patch and see how he reacts.

Might have to wait for a few years then, mate! I wasn’t familiar with him prior to signing him but his mentality and focus seems already above and beyond what mustafi and kola were capable of.

He’s like a new Japanese Monreal, except young and tall.. Also reminds me of Cowboy bebop in his stature. He can play rcb and RB! Like Monreal with LB and LCB.

Can’t wait to see him score his first goal… Hopefully his celebrations will be as enigmatic as Monreals!

OMG, A fellow Cowboy beebop fan!! One of the greatest Anime’s ever, and arguably the best soundtrack of all time in any format.

Yoko Kanno (and the Seatbelts) really outdid themselves on that soundtrack. Tank! is such a great opener.

What a bunch of utter tools those clueless Sky wankers are.

Ed the Red
Reply to  goonshow

They’re an unwatchable pair of cunts. Their forced banter is one of the most tediously painful sights on TV. Their smugness as they deliver what they believe to be the inside track but what most people already know, is an astonishing demonstration of self-importance.