Arseblog News – the Arsenal news site
Home Players Injury news Arteta: Xhaka will be missed but injury could have been worse 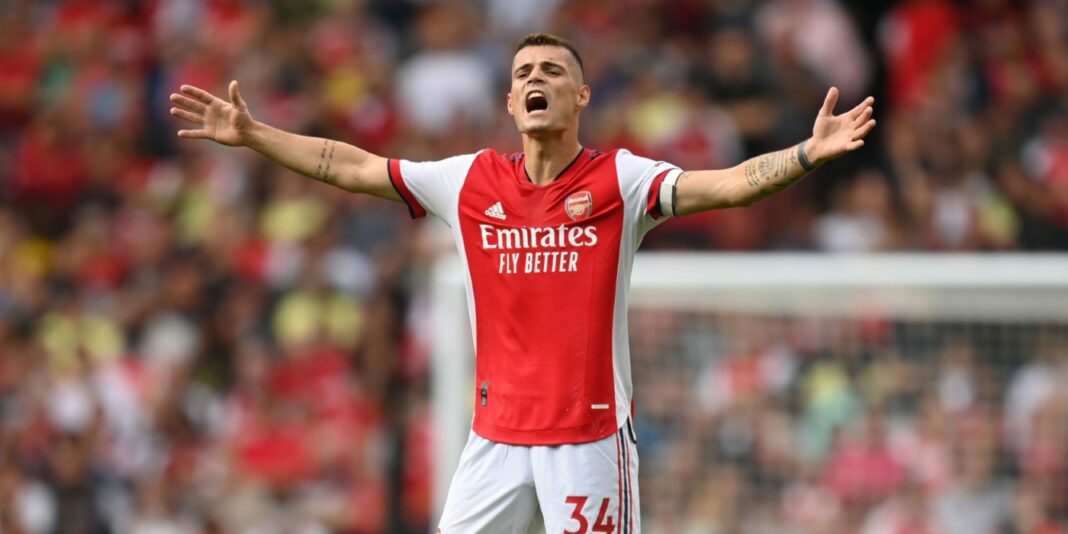 The Gunners medical team confirmed yesterday that the Switzerland international had suffered a significant injury to his medial knee ligament but will not require surgery.

“Obviously, it’s really bad news personally for Granit,” said Arteta ahead of Saturday’s trip to Brighton. “He’s already had a couple of incidents this season with Covid and the suspension and now a long-term injury.

“He’s a strong man and he will use this time to focus on other things and I’m sure he’ll be back in the right place when he’s back. He’s a big player for us, really important and he will be missed. Other players have to step in.”

He added: “It’s a significant injury but he probably escaped an even worse injury in that action. That action for the cruciate ligament is a tricky one so, yeah, it is what is. His mentality is top, he knows what he needs to do now and hopefully, he can escape surgery, which is really important, and after that, he needs to prepare himself in the best possible way because time flies.”

The Spaniard was also quizzed on who might replace Xhaka alongside Thomas Partey in midfield. While he wouldn’t be drawn on specific names, he was then asked specifically about Ainsley Maitland-Niles’ credentials.

“We’ll try to keep him as close as possible to the team and he’ll evolve. It’s the first big injury that he’s had, we are here to help him and i’m sure we’ll find other ways [to cope] around the team because we have some other really good players that will step in and do the job.

“Ainsley is certainly one of the options and we’ve used him quite a lot at the start of the season and he’s doing really well. I’ve been impressed by what I’ve seen.”

Having come close to selling Xhaka in the summer, it’s somewhat ironic that for the first time in his Gunners career he’s now facing a prolonged spell on the sidelines. It certainly represents a good opportunity for others to prove there is life after Granit, whenever that might actually come.

I just want to say that on derby day I ready the headline ‘Arteta has a full squad to choose from’ and I nearly took a screen shot because since the early Arsene days I can barely remember a moment where this has happened. It therefore sucks that one game later we lose Xhaka to a serious (not as serious as feared, but still) injury for 3 months. I was really hoping we could maintain this fit squad thing for at least a couple of matches but alas it was too much to ask and where the injury gods giveth… Read more »

I think it happened once last, if I’m not mistaken. And similarly, it was followed by an avalanche of injuries.

I suspect that had we sold him in the summer, we would have bought a replacement with the money since the only real quality option is Sambi unless AMN surprises us all in midfield…

and I suspect that the replacement would be injured by now…

…and really bad eggs…
Reply to  Cyprus The Immortal Gooner

In the summer I was hoping we’d bring In Bruno Guimarães as replacement. There has been a few rumors around him and I think he’s fit really nicely alongside Partey.

Anyways, seasons up and running now – we can only look ahead!

I wish him a speedy recovery. He looks good alongside Partey and with the right partner in midfield he’s effective. The more options we have available the better. Xhaka, for all the criticism (from me included), is a useful player in the right setting and when he keeps his head. It looked a nasty injury and I hope it doesn’t have any lasting problems for him.

It’s just really annoying that because of whatever reasons (injuries, lack of fitness, suspensions, covid, bad team selection etc) we haven’t had a chance to see the Xhaka / Partey partnership have a string of like 10+ games together in midfield.

Even when they’re both available, it felt like one of them was always on the way back to building fitness / form. I think Sunday was one of the first times I can remember when they were both 100% and flying.

So he’s no granite after all… speedy recovery Granit!!!

It is what it is. No Xhaka for 3 months.
Time to put the Konga Partey on the loop.