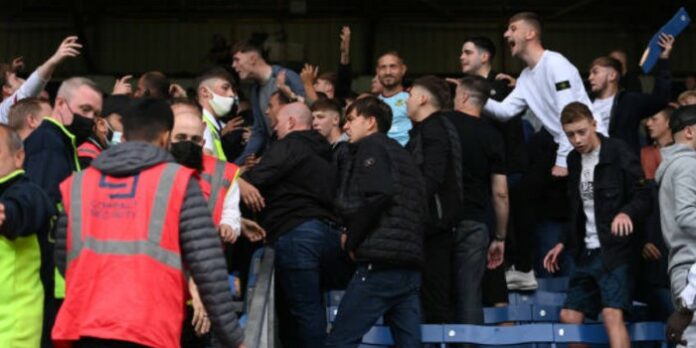 The FA are set to investigate the crowd unrest that took place in the aftermath of Arsenal’s 1-0 win over Burnley on Saturday.

Videos and images show fans of each club being held back by stewards as missiles – mostly plastic bottles and ripped up seats – were thrown back and forth in the David Fishwick Stand.

Announcements were made on the PA system urging fans to disperse before further stewards were sent to try and diffuse the tension.

We expect both clubs will also review the footage in case any troublemakers can be identified but we’d be surprised if there were any serious repercussions.

On the pitch, the scenes were also ugly but that was mostly down to Burnley’s one-dimensional hoof and hope tactics.

Mikel Arteta’s boys in yellow withstood a 90-minute aerial bombardment to claim a clean sheet and, courtesy of Martin Odegaard’s first half free-kick, the three points.

I guess there’s nothing else to do in Burnley?

Azeez Is Good
Reply to  Zenithreptile

I’m not one to glamorise or praise violence, but our supporters this season are on another level!

Everyone’s mentioned it, even Mikel. And it makes me itch to get back to games myself. Obviously this behaviour shouldn’t be condoned but our supporters, like our team, have long been accused of being a soft touch. Prawn sandwich etc etc…

I think Brentford and Burnley away may make some think twice about that.

Gunnerbear
Reply to  Azeez Is Good

Did the team get mashed by Brentford?

They home ground essentially translates to swamp-grass: so banjos, cousins, brothers, sisters and all that jazz.

That one chap behind and above the gent in the white mask looks a bit like Xhaka. Good to know he is making productive use of his time off…

Telling Arsenal fans to fuck off by the looks of it.

Talk about a Busman’s Holiday…

Burnley really are the new stoke- horrible oafs on the pitch, annoying manager with 19th century tactics and attitude, and fans who boo the sick.

Can’t wait for them to get relegated.

They boo the sick!!! Boooooo
Just had a lung transplant, “boooooo!!”
😂😂

Unless I’m mistaken, 19th century football prioritized attack over anything else – which doesn’t sound like the dour counts.

Agree with everything else. I feel sorry for the fans of Championship clubs who’ll have to deal with this shit team, their shit fans, and their moaning bitch of a manager after they get relegated this season.

19th century football also had a heavy emphasis on dribbling towards the goal than passing. Judging by historical accounts, players used to crowd the ball a lot and maintaining positional rigidity was an afterthought.

It was more similar to rugby in some aspects.

What I hate most is just how whiny they are. The constant exasperation and gesticulations from their players, the booing/ironic cheering of every decision by their fans, Dyche blaming every single dropped point on referees’ big club bias. Fuck off

Despite that his team get decisions in their favour no other team do. On account of the fact their whole gameplan relies on overstepping the limits, meaning referees have to let some things go for there to even be a game

Immaculate reporting of the happening on the pitch ha ha

Fuck Burnley fans! Love our away fans. We support you guys 1000%!

Did anyone follow the link? €475 for the large size picture. Bargain.

will bring the drink’s

Hopefully Burnley will be relegated this year.

They can take their flat caps, black pudding, mushy peas, whippets and pigeons down to the Championship where they will play Stoke and Blackburn next season.

Their racism, violence and moaning too.

Thought we were at stoke for a min there 🙈but to be fair we’re normally a well behaved bunch so one he can only assume a burnley fans family member was insulted which to be fair could be anyone in the home section.