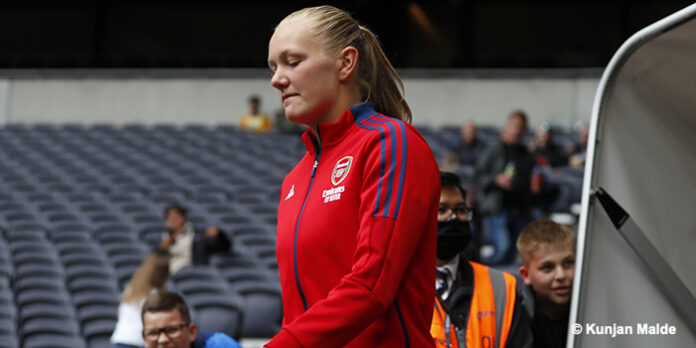 22-year-old Frida Maanum signed for Arsenal from Linkopings this summer. The Norwegian captained the Swedish side last season at the age of 21. She was one of the most sought after young players in Europe but Arsenal muscled their way to the front of the queue for her signature.

Since joining the club, she has started all five of Arsenal’s games under Jonas Eidevall, even keeping a bona fide first teamer like Lia Wälti out of the starting line-up on occasion.

What is even more impressive is that Maanum has been assigned a few different tactical roles within those five games. She has played as a six, an eight and, in the 3-2 home victory over Chelsea, she played as a kind of false left-back in build-up to help Katie McCabe dominate the left flank. 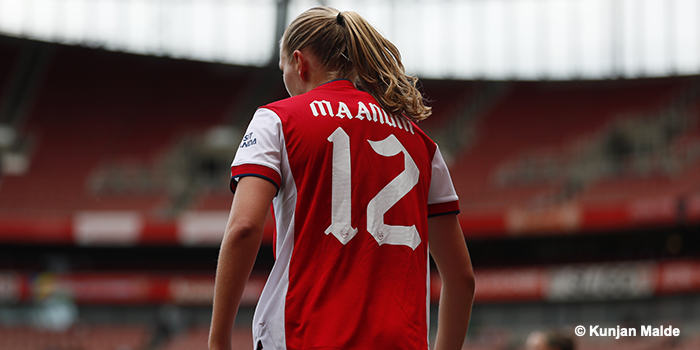 It is unusual for a young player to be so trusted to perform so many nuanced roles. Arseblog News asked Jonas Eidevall what it is about Maanum that makes her so adaptable ahead of the Gunners’ trip to Reading on Sunday.

“It comes down to three things basically, she has the physical aspect which means she can handle a lot of different positions. She is very, very comfortable with the ball and she is very game intelligent.

“Frida is one of those players that I don’t worry about when I give her a new role because she takes it all on so quickly and understands so quickly what needs to be done.

“If you give her the broad picture she gets all of the details right straight away. A lot of credit to the coaches that have educated her before because she has been great in that aspect.”

A brilliant start from Frida. She just looks the part, whichever part she has been given. The physical aspect of her game is something we have been missing since Dom Jannsen’s departure.

Dom was always an unsung hero in the team for me. Frida is an excellent addition.

Heroine surely! 🙂
Agree though, many similarities between the two. Both under the radar but the contribution and value to the team vastly underestimated.

Sometimes I wish we could bring her back to Meadow pack. She was so good honestly.

Her last 3 years at Linköpings
She scored in the neighborhood of 24 goals in 82 apps.

Can’t wait for her to start kicking up the dust.

I think Heath is the best player on the US roster, but my favorite signing this year is definitely Mannum. So phyched with all the new ladies and the Jonas.

She’s definitely looked like the real deal – strong, smart, and technical – looks comfortable playing at different tempos – made a difference in breaking the Chelsea press –

The most impressive thing about her, for me, is her engine! She can be testing the goalkeeper with a wicked shot this minute, the next one she’s made a third man run down the flanks to receive the ball and square it… and the one after that she’s back in front of the defence to nick the ball off an opposition player.

Such an astute signing. Long may her star continue to sparkle

Quality signing. From start to end. She looks comfortable after 5 games. I think she needs little settling in from now on.

Really interesting player, I had no idea about Frida before joining Arsenal (my ignorance unfortunately). When I saw her on TV, her technique and comfort on the ball in crowded spaces made me think she was like an early version of Kim. Seeing her live I was surprised how tall she is and struck by the commanding presence added to the technique. This summary about her high intelligence and ability to execute in different positions makes it completely understandable why she was so sought after. Picking up on Tim’s recent explanation about short contracts in WSL I wonder if such… Read more »

Lovely piece, Tim. I love it when we make non-obvious but perfect-for-us signings. We have acquired an exceptionally mature player for her age.