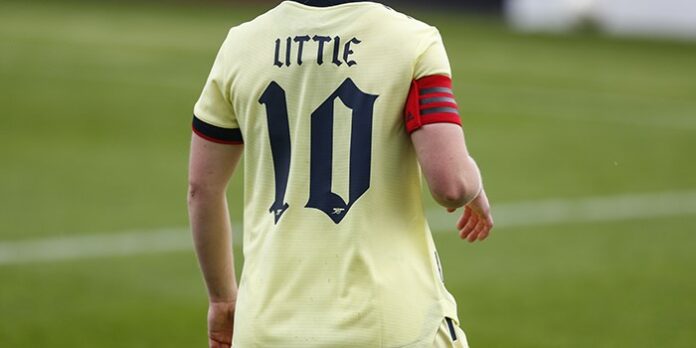 Arsenal captain Kim Little has made the decision to retire from international football. The 31-year-old made her debut for Scotland when she was 16 and has made 140 appearances for them since 2007.

Scotland failed to qualify for next summer’s European Championships in England and with 2023 World Cup qualifying set to start again later this month, Kim has decided to call time and focus on her club career. “Stepping away from playing international football is something I have been considering for a while and I feel now is the right time to make that change,” Kim told the Scottish FA website.

“I am proud of the 15 years I have spent representing the national team. I have developed and grown as a person through my experiences representing my country and know they will help me in countless ways in the future.

“Thank you to my teammates for being incredibly empowering and inspiring women. My most vivid and fondest memories are from being by your side on and off the pitch through good times and some challenging times, pushing for progress for the women’s game.

For the goals, for the incredible memories, for taking us to our first ever major tournaments, for inspiring the next generation of footballers to follow in your footsteps – for everything:

“I now look forward to supporting you all from afar and can’t wait to watch you perform and continue to improve the women’s game in Scotland, paving the way for more young girls to have a career as a footballer.

“I want to wish Pedro and the team all the very best for the up-and-coming qualifiers in September and for the rest of the campaign and beyond.”

Scotland recently replaced one former Arsenal coach in Shelley Kerr with another former Gunners boss in Pedro Losa. Kim has also represented Team GB at the 2012 and 2020 Olympic Games.

Am I the only one to think this is not coincidental with them getting a new manager she’s played under before? Clearly she’s still more than good enough to play in the team… what a loss for Scotland :’(

Mmm! Conspiracy theory! 🙂
She is still at the top of her game and it’s not like Scotland are overwhelmed by midfielders with Kim’s quality.
Still, from a Gunner’s view that’s better for us; less travelling, lower chance of injury in games of no benefit to our cause so hopefully more availability and a fresher Kim when we need her most!

I’m not sure but anything’s possible I guess. She’s sort of at that age where players think about how their overall game can become affected by wear-and-tear, lot’s of travelling etc. It feels a little early as she won’t be that old at the next World Cup but if you’re going to make a decision, just ahead of the qualifying process is as good a time as any. Maybe she’s wondering about Scotland’s likelihood of qualifying? I’m genuinely in ignorance about any injuries that she might be carrying, the type of things a player in their early thirties tends to… Read more »

That occurred to me, too. Very sad for Scotland but I can’t blame Kim.

Kim is of course, Scotland’s number 1 player, but it seems it’s an intelligent and carefully considered decision & made at the right stage in her career.
Absolutely good news for her club with the busy season’s schedule newly started 🙂

I’m very glad we got to see her playing for Team GB where she was their best player. Caroline Weir was probably our second best midfielder; I think that shows the task Sarina Wiegman has ahead of her in reconstructing the England team. There must be room for a fully fit Jordan!

I have a feeling that Wiegman may be a little more ruthless than previous Lioness managers who were blinkered by the blue side of Manchester but I’m not quite sure what this has to do with Kim leaving the Scottish national team.

Sad for Scotland, glad for us.

Still remember watching her at the Olympics for Team GB back in 2012. Good memories from a simpler time.

Always sad to see curtains close but I’m sure she has good reasons.

Yes, that’s when I first saw Kim and noticed this intelligent young ball player who was clearly “a cut above the rest”
London 2012 and Kim in particular, is the reason I started following women’s football 🙂

If you were the Scotland manager, surely you’d be on phone regular to try persuade her comeback. Massive loss for them.

Good news for Arsenal though.

I’m just so glad I saw her play for Scotland against Argentina in Paris in the World Cup a couple of years ago. What a player, what a person. Sad to see her retire from international duty but hopefully this means many more years being successful at Arsenal. My favourite player.

My favourite too – I love watching her play for Arsenal, and also Team GB & Scotland – she has a magic quality on the pitch that draws your eyes towards her no matter which other star players are on the field. Kim is “on her own wavelength” which all her team mates know & try to keep up with. There’s rarely a game in which she doesn’t produce something sensational – even that simple penalty versus Sparta last week when she stood unfazed for nearly a full minute, checked the keeper when the whistle blew & then calmly &… Read more »