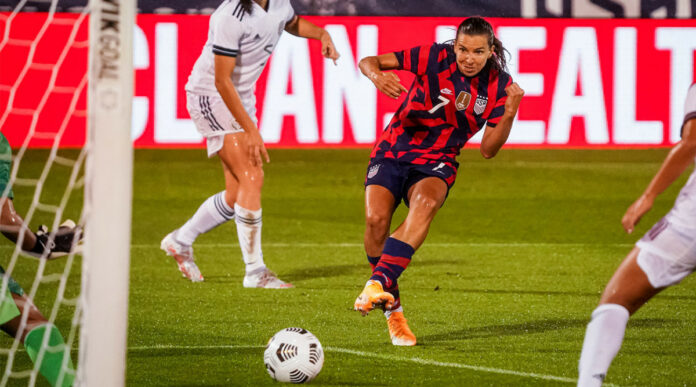 Arsenal announced the signing of US superstar Tobin Heath on a free transfer on Friday. The negotiations were kept pretty quiet until Thursday afternoon when former Gunners defender Anita Asante revealed a deal was close on Sky Sports News.

Arseblog News had the opportunity to speak to Arsenal coach Jonas Eidevall about the signing in his Friday press conference and the Swede revealed that the deal was a long time in the making, even if it was announced quickly after the news spilled out. “Pre Olympics we started to look at the opportunity to bring Tobin here, Tobin was very, very keen to come and play for Arsenal, which is nice of course.

“Even if it was a deal that was announced very late in the transfer window, it wasn’t a last minute deal. It is something we have worked on for the whole transfer window basically. We are delighted that we could agree terms and make Tobin an Arsenal player.” With Beth Mead and Nikita Parris already fighting it out for a spot on the right-wing and Mana Iwabuchi and Caitlin Foord capable of playing there too, it wasn’t an area of particular need for Arsenal.

However, Jonas Eidevall offered this perspective when I asked him the question, ‘do you just go and get Tobin Heath if you can get Tobin Heath and worry about the rest later?’, “I think with the number of games I hope we play this autumn and with the work we require from our wide forwards, we will need the ability to substitute players but also to rotate between games.

“We need to be able to give players a rest sometimes so they don’t play every game, otherwise fatigue increases and intensity starts to drop. I also think that when you want to win things you want players that win you points, that get you assists and goals and that is a really important aspect.

“Tobin Heath is a points player, she wins you points and she makes the difference in games at the highest level. Of course we are very excited to bring her here and help us with the ambitions that we have this year.”

Later on Friday, we will have an Arsenal Women Arsecast with US based women’s soccer journalist Jeff Kassouf, who broke the story that Tobin would stay in England last week.

You cannot fail to be excited for the coming season now!
I’d never previously heard of Jonas but he is certainly setting out his stall early doors. We have looked a completely different team in the last couple of games and Tobin can only improve things.
You cannot have too many world class players in a squad for the number of games we have on the horizon and with our historical injury woes.
I hope Jonas can get to the bottom of those too!

Re the injury issues, I’ve been thinking about that as well and hoping that the investment and appointment of Gary Lewin goes some way to helping/alleviating things.