THE LOWDOWN
It’s match day two in the UEFA Women’s Champions League on Thursday evening as Arsenal welcome German side Hoffenheim to Meadow Park. Hoffenheim finished third in the Bundesliga last season, inflicting Bayern Munich’s solitary league defeat last season in the process. They will pose a stern test for Jonas Eidevall’s side.

These matches between Arsenal and Hoffenheim will almost certainly decide who finishes 2nd in the group behind Barcelona. The Gunners can expect a stiff examination from a Hoffenheim side who lost 3-1 away at Bayern Munich on Saturday. This is also the last match for Arsenal until the FA Cup semi-final against Brighton on 31st October with an international break looming.

You just don’t save those…@FMaanum 😱

That said, this coming weekend is a free weekend in the fixture list, so Arsenal’s players will get some precious down time after a punishing schedule that has seen them play every three days since mid-August, with nine players involved in the Olympics in July too. Sunday’s 3-0 win over Everton blew away the cobwebs of defeat in Barcelona on match day one.

However, this is where they make up the ground in the Champions League. A defeat would put them six points behind Hoffenheim one third of the way through the group. Hoffenheim despatched FC Koge of Denmark 5-0 at home on match day one. Arsenal and Hoffenheim will meet again on match day six in Germany in what could be a winner takes all affair.

TEAM NEWS
Once again, Arsenal will only be without Simone Boye Sorensen (knee) and Malin Gut (ACL) on Sunday, though Boye is now training outside again. Lia Wälti, Jen Beattie and Anna Patten all face late fitness checks after missing the Everton game with minor strains.

A WORD FROM THE BOSS
“They played my former team Rosengard in the Champions League qualifier and I know Rosengard joked that they only needed a 40m wide pitch to play them because they don’t really use the sides, they play centrally and create central overloads. They are very brave and they are not so concerned about losing the ball, I don’t think they want to lose it close to their goal, of course, but it’s because of the counterpressing style they play.

“They want to pass through the thirds and they are not concerned about losing the ball because that’s just a signal for them to counterpress and win the ball back and go again when the opponent is a little bit more disorganised. Those counterpressing moments will be very decisive to see how we handle them and how well they are executing. They’re not afraid to impose themselves on us. It’s gonna be high intensity, lots of sprinting, duels, they’re gonna be really aggressive, give us very little time with the ball and try to make things as uncomfortable as possible for us.”

LAST TIME OUT
Arsenal and Hoffenheim have not played one another before.

THE OPPOSITION
Hoffenheim currently sit in 5th place in the Frauen Bundesliga with 10 points from their first five games, they have won three, drawn with Essen and lost 3-1 at Bayern Munich on Saturday evening. Hoffenheim are an interesting and incredibly brave side who play out from the back no matter how much pressure they come under- an area that Eidevall’s side might look to exploit with a high press.

Hoffenheim are big beneficiaries of the expansion of the Champions League, they also finished 3rd in 2019-20 but with no European prize at the end of that campaign, repeating that feat last season has earned them their maiden European voyage. Their best known player is Austrian striker Nicole Billa who led the Bundesliga goal scoring charts with 23 goals last season- Jonas is sure to ask for intel on Billa from her international teammates Manu Zinsberger and Viki Schnaderbeck.

Hoffenheim eliminated Eidevall’s former club Rosengard in the Champions League qualifying rounds with a 6-3 aggregate win, which gives a glimpse of their credentials under coach Gabor Gallai. The schedule will be a new experience for Hoffenheim who, having already wrestled Bayern on Saturday, face Wolfsburg next weekend either side of this trip to London. How they handle these tests will define their season but they know they have nothing to lose given their pedigree, historically speaking.

PLAYER TO WATCH
Hoffenheim believe absolutely in their principles of playing out from the back. They are pretty good at it too and have scored more than one goal emanating from a back to front move where they have invited the press and exploited the spaces left by their opponents. However, such a style can come at a cost. Hoffenheim coughed up a crucial goal against Bayern on Saturday as they were dispossessed playing out from their goalkeeper. 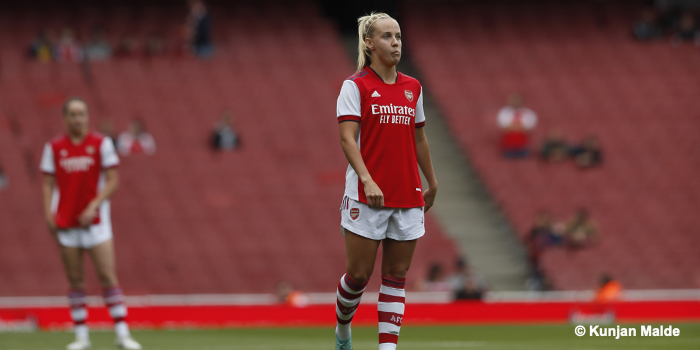 This is where Beth Mead’s pressing and interceptions will be valuable. Beth has made 2.69 tackles per 90 over the last 12 months, putting her in the 83rd percentile for all players in the WSL in this metric- a quite stunning total for a forward. Her ability to force turnovers is unrivalled by other forwards in the league and with Hoffenheim’s risky style, she will be on full alert on Thursday evening. 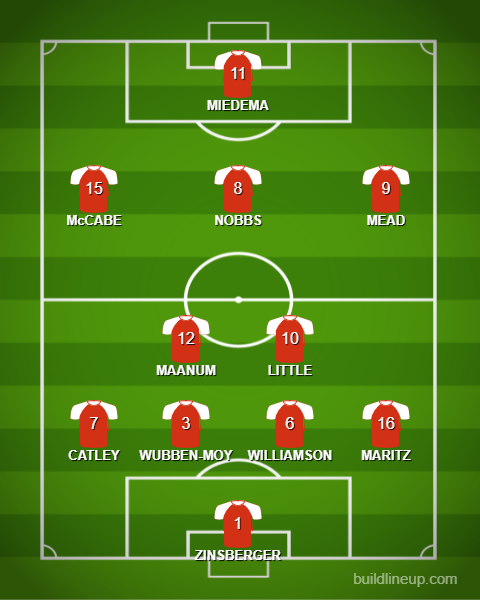 HOW TO CATCH THE GAME
The game kicks off at 8pm on Thursday evening at Meadow Park. Tickets are available on the door at £12 adults £6 concessions- remember that this game doesn’t count on member’s season tickets and has to be bought separately. This match, like all UWCL matches, will be streamed live on DAZN’s YouTube channel free of charge, unless you are in the Middle East or North Africa, where the game will be on BeIN Sports.

COMING UP
We will have match reaction from Jonas Eidevall on the site on Thursday evening, there will be an Arsenal Women Arsecast during the international break too.

No! We want to hassle the Hoff!

I think hoffenheim essentially plays a 4-4-2 with 2 very robust strikers in billa and de caigny, so the 2 CBs need to be very strong. I think while Hoffenheim attack centrally, they can be quite vulnerable down the middle, and bayern didnt do enough of isolating the central midfield and then attacking them there. So, Could be a game for Nobbs and Maanum to press their midfield and run with the ball. Little to sit deeper and pick up Corley. I think this may be a game for foord to start on the left wing, with heath and katie… Read more »

Hmmm, I’d be surprised to see Nobbs start (though not in an unpleasant way). I am so rooting for her to get more game time and get her lionesses recall.

I’d like to see mana and lil kim as double 8s, with a front 3 of heath, viv and meado.

Tobin Heath looks a level above her peers, why doesn’t she get much starts?

What level above? She’s a good player but not as good as few years back. On current form, MCcabe, Miedema and Mead are ahead of her.

All 4 of the players are in outstanding form.

Really looking forward to tonight’s match, but with a little trepidation – Hoffenheim have some really good players (not usually mentioned among their stars, but keep an eye out for Jule Brand).

I think we’ll get a better idea of just how far above everyone else Barcelona are. I’m hoping that our present position is up there with “the best of the rest”, and under Jonas’s guidance able to improve.

Jordan must start against a tough energetic opponent.
I’d also personally rather see Lia Walti than Frida for this game, given her experience. Frida’s made a fab start as a Gunner but showed her inexperience in Spain.
Our exciting new manager has previously faced Hoffenheim, which should prove crucial in our tactics and approach to the game 🙂

So much content about AWFC these days! You are spoiling us, Tim.
Well done to the fitness team and the players for (almost) getting back to fitness. This match is huge, absolutely must-win. Good luck, girls!

I watched the barca game we are far away in the champions league.Though am impressed at the league run.