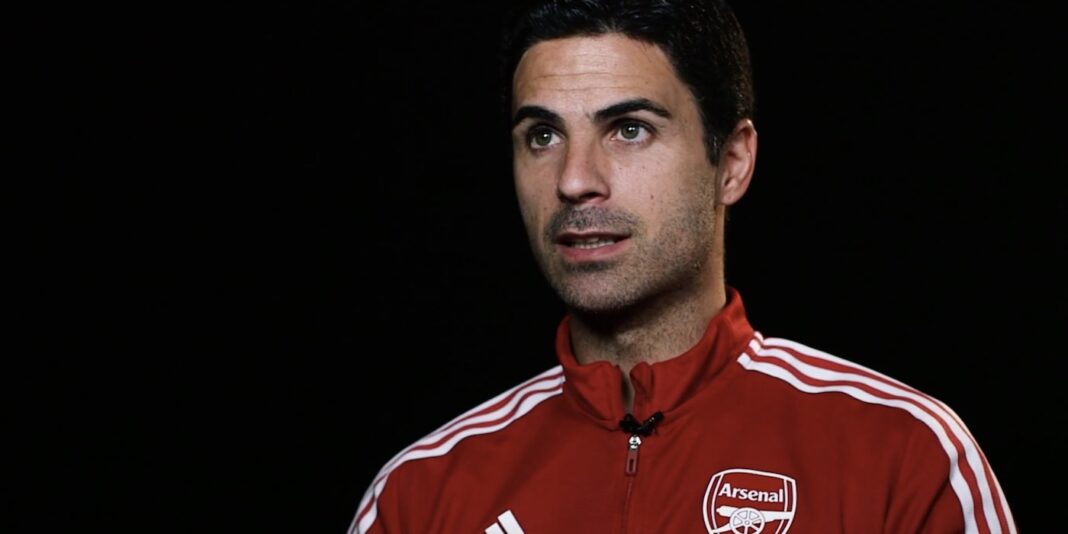 Mikel Arteta has been named Premier League manager of the month for September.

After a dismal start to the season, the Gunners responded with three wins and a draw from their fixtures last month, beating Burnley and Norwich 1-0, battering Sp*rs 3-1 in the North London derby (although we are legally required to point out at this time that Tottenham do get battered everywhere they go), before a 0-0 draw with Brighton made it 10 points from 12 with three clean sheets.

It doesn’t mean everything is hunky-dory, but it was definitely an improvement, and hopefully something we can build on after the Interlull.

Speaking to the official Arsenal website, the boss was keen to highlight the work done by all his coaching staff, saying, “I think represents the way everyone has been together, has been working and has been positive in difficult moments and continued to do their work with the right mentality, the right ambition and with the right work and direction.

“So it’s for them. I get the award, but it’s for all the people behind it.”

Nice work, keep it up.

Great for him and Arsenal, we haven’t won this for several years.

Rubbish opposition in the three matches, especially the last match of the month, but well done to him!

The Brighton match was in October, so doesn’t count for September! Sp*rs was the last match in September.

Fair play to him.

An inauspicious award. Usually it is a precursor to a run of dismal results. I think Hassenhuttl got tonked 9-0 the first time after winning manager of the month. Let’s hope MA does differently

Well deserved, we came out fighting and together after a horrible start and were the only team to win three out of three in September. Nice that he had his picture taken with all the staff and thanked them, the players and the fans. The first time an Arsenal manager has received this award since Wenger in 2015, things are looking good, well done Mikel!

The Beast
Reply to  Vonnie

Jesus, has it been that long?!

Well done indeed & long may it continue. Add some goals to the defensive stability & we’re in business.

Jesus
Reply to  The Beast

Yes, it has been that long.

The Beast
Reply to  Jesus

If you can’t Brighton or Brentford then …….nevermind

Liverpool lost to Brighton at Anfield the last time the two teams played and just drew with Brentford.

If you can’t make a smug, derogatory comment without at least first checking that you have typed it correctly…..nevermind

Hahahhahaa, you must be having a VERY bad day. Something in your cornflakes? 😉

Yes, I’m clearly the one having a bad day. That makes total sense 🙄

Tried ignoring him mate… and no, he unfortunately doesn’t go away.

Not sure where the entitlement comes from. You know the invincibles were like 16 years ago right? Even they struggled to beat the Brighton’s of this world some days.

Defending Arteta by dissing The Invincibles.

Jokes aside, well deserved award for this month.

Most of want to see us moving in positive direction. Hopefully this is a start. Never mind some opinions which cannot see the positives and always have an agenda to drive home!

Im not saying it will happen straight away…but what if it does?🤯

It’s been almost two years since he was appointed.

If that’s your definition of “straight away”, you must work for the government.

Guns Up
Reply to  SarcasmB0T

“…as his mainly young, inexperienced players grow into theirs.” Odegaard, White, Ramsdale, Tomiyasu, Lokonga, and Tavares were all here two years ago as well, right?

Excellent point. Some really solid signs of that growth—immediately delivering an FA Cup title, beating top sides along the way. Very positive summer transfer window, with every signing looking more positive than negative at this early stage of their Arsenal careers. But much growth still needed, with him and his players. But really good point about that growth happening simultaneously. That’s one of the interesting things about where this team is. With a central defender like Gabriel, he has an defensive anchor that he can rely on through thick and thin. And Ramsdale and White look to be strong partners… Read more »

I agree, still a long way to go. It might all come together, or it might all go tits up. But what might help in the long run is if the toxic element in the fan base collectively shut up!

Very nice award. Well done to Arteta. So, why am I still worried sick that, the Spuds game aside, the team still doesn’t look like it’s gelled together?

Because the team doesn’t look lit it has gelled together for the most part? I really hope it’s Europa League at a minimum or bust for Mikel. It’s nice to win and better to win a few games in a row. It has certainly listed the mood but another 8th or even 7th place finish and we just need to move on from him. If we don’t that’s 2 and a half years treading water.

Well done. If Arteta does well, it means Arsenal will too. But he still has some way to go.

Lets be honest he deserved it.
The kind of start we had to the season, winning the matches we did was commendable & quite a turnaround!

The biggest question now is can we be consistent and play the same level of football week in week out. That’s what separates manager of the months vs Manager of the season!

The Beast
Reply to  SarcasmB0T

I mean, there is a 3rd option

You know what people should do when they have nothing nice to say ….

Arteta is doing well. The new signings, the focus on youth, it’s feeling promising. We know that 10 points from the last 12 is a very solid return. But let’s see what the return is from the next 12 points. Arteta still has a major problem to solve — our goal production this season is woeful. He has to solve that problem before being fully convincing. And the most maddening aspect of our offensive stagnation is Arteta’s handling of Martinelli. Gabby was said to have played well in the closed door game this week and scored a brace. Consider that… Read more »

I will put it more as structure of playing 11. If we are playing with Xhaka then no Pepe and no Martinelli. I believe he has very less room to get in, maybe right wing is his spot but we have seen Tierney and Martinelli need to work out the partnership or else it will always be ESR on right and Saka in left, which I will gladly take. Also we were never comfortable in any of the matches to give him a brief run out, hopefully he starts getting atleast the sub role and starts to put up a… Read more »

Thought it was interesting how there’s less than 3 years age difference between the Manager of the Month and Player of the Month.

The only reason he got it, Sp*rs. Other than that it was an ordinary month.

We were the only club in the league with a 100% win record in September.

Am I allowed to say “well done” on the internet?? 🙂

It’s always nice to be praised for hard work. Good for them. I thought it was really nice that MA put emphasis on the team effort of coaching the squad.

Happy to celebrate the nice things as they come up, big and small, including some small form of external recognition of good progress with the team.

These words belong to someone else but match my opinions “Arteta has not only targeted quality, he also targeted character. These signings have all proven to be popular with the fanbase. Mikel Arteta has incredibly overseen multiple transfer signings that can only be described as perfect in terms of their character, quality, age profile, and the fan connection to them. These are exactly the profiles that a rebuilding club needs. This is not just remarkable profiling from a 36-year-old coach hired halfway through a tumultuous season, it is ridiculous, maybe even miraculous considering the odds.”

If only we had an attacking game which also works outside of laboratory conditions. Even Wenger who really couldn’t be blamed for an unplanned, ultra-improvised, laissez faire way of playing left a portion of how he approached the game to self expression of the players. I am not talking about the Invincibles or anything pre 2010. To think you can model the entirety of a game to the last second in your lab, and the goals you score must originate from your goalkeeper rolling it out to the first defender who then launches a spell of 30 uninterrupted passes before… Read more »