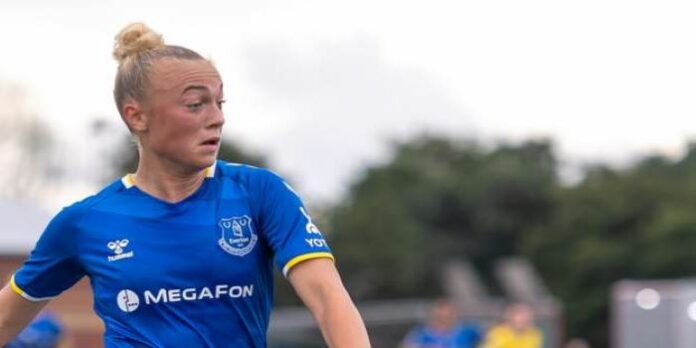 When Jonas Eidevall’s Arsenal take on Everton in the WSL on Sunday, he will be very familiar with several of the players on the opposing team. Willie Kirk’s side purchased three players from Eidevall’s previous club Rosengard during the summer.

The most trumpeted of those signings was 18 year-old midfielder Hanna Bennison who arrived for a club record fee and is one of the most highly rated teenagers in Europe. Eidevall coached Bennison for three years, handing her her full debut as a 15 year-old. Arseblog News asks Eidevall what it is that makes Bennison so coveted.

“Hanna is special because she has great technique with the ball,” he explains. “She is so comfortable with the ball in any situation, she can handle very little space and time and still have good solutions. Something people probably don’t see is that she is one of the best trainers I have coached, she practices so hard and that was really clear when I first saw her as a youth player at Malmo. That’s her big skill, she practices so hard that she is very comfortable on the ball.”

Feast your eyes on this Hanna Bennison strike 😍

Arseblog News asks Eidevall how far Bennison can go in the game, given that she is already a club record signing for Everton and has won 14 caps for her country. “The next step for Hanna is to choose from all the possible decisions that she can take when she has the ball,” Jonas offers.

“Sometimes that step is harder when you can do so many different things because you have so many more options. Sometimes it is easier for a player who is limited and can only see one or two options. But Hanna can see six or seven different options. That means when she scans just before she gets the ball, she needs to assess all of those things she can see very quickly.

“That takes some time but it will come, players with that great technique will get better and better. Hanna has great potential and a big future because she has not hit her highest level yet and she is already so good.”

She has certainly made a difference in a couple of Everton’s matches. Is it mean of me to hope that she has a really indecisive match on Sunday? No, I don’t think it is.

That goal is class. Her skill on the ball is amazing.

Am I the only one hoping Arsenal will sign her soon? I kinda understood that Jonas couldn’t plunder his former club when leaving, but I’m definitely hoping that like with Mana to Villa, it is just a quick stop on the way to Arsenal…

This! I have had the same thought.