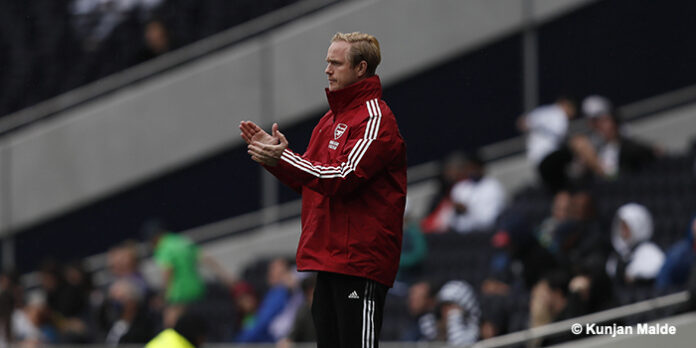 Arsenal boss Jonas Eidevall says that WSL clubs have to come to an agreement to provide greater assistance to teams in European competition. The Gunners are the only British side to win the Champions League, hoisting the trophy in 2007. Since then, Chelsea qualified for last season’s final but nobody else from England has come close.

Eidevall thinks the intense style of English football and the calendar are partly responsible and he believes a consensus should be arrived at on the latter. “I think it might be a loading issue and something that we need to incorporate between the clubs in the WSL. No English club has won the UWCL since 2007. We know the games we play in the FA Cup, the WSL, the Conti Cup will be intense games. It’s a physical league and a physical style of football in England.

“How can we make sure the teams who play in Europe are as rested and recovered when they are playing in Europe? We are not only representing ourselves but England with the association coefficient which will – every five years – determine how many spots they will have in the UWCL and what ranking we have, how easy it will be for us to get in the tournament etc. So we are basically playing for all English clubs.

“It is in everyone’s interest that we get good results in Europe this year then we need to think from a planning perspective, when do we play our games on a weekend? Originally we were meant to play our game against Aston Villa on Sunday night then Barcelona on Tuesday which would have been almost an impossible turnover and required a lot of effort from the club and a lot of people to get that game turned around to the Saturday.

“It would be interesting to see if clubs can come together and try to talk. If you look at the schedule now, after Hoffenheim on Thursday, there is a free weekend in the WSL before the international break. For me, it would have made every sense to move the Villa game out of this congested period and onto that weekend. It would have given us so much better possibilities to play a UWCL game with the strongest squad possible.

Huh interesting, I hadn’t thought of this but I can’t think of any arguments against it.

Tim, do you know if there are reasons that e.g. smaller clubs without realistic hopes of playing in Europe themselves might not support this flexibility? Or broadcasters?

Over to you, WSL.

We have had the same arguments in the men’s game. It is always short term advantage that the other clubs are looking for.

A lot of it is to do with the broadcasters. Football used to be played Saturday afternoons and Tuesday evenings that was it. Due to television we now have virtually 7 days a week at all sorts of ridiculous kick off times just to suit their schedule. Unfortunately, we like watching football on television and they pour an awful lot of money into the pot so it is difficult to see how it will change unless the domestic season is extended. Even that generates problems as the summer experiment did not go down well and for a different reason we’re… Read more »