Arsenal have been a slightly different proposition under new coach Jonas Eidevall this season. The Gunners have won all of their WSL matches so far, including a 3-2 home win over Chelsea and a 5-0 home victory against Manchester City. A 4-1 humbling at European champions Barcelona has been the only blot on the copybook so far this season. So what exactly has changed? I peered into the FBRef data to take a closer look.

The high press
From the start, Jonas Eidevall has made it clear that he wants his team to be intense when it comes to pressing the opposition, especially in the final third. Under Joe Montemurro, Arsenal had a strategy based on possession and passing accurately. Under Eidevall, the intention is slightly different, Jonas wants Arsenal to get the ball forwards much more quickly because, even if the passes prove to be inaccurate, that opens up the chance to counterpress opponents and regain the ball high up the pitch when defences are at their most disorganised.

The numbers very much bear out that Arsenal are pressing with far greater regularity.

Pressures in the attacking third have more than trebled on last season while they have nearly doubled in the middle third. Below, you can see what that looks like for some of Arsenal’s key midfield and attacking personnel. Vivianne Miedema’s numbers have rocketed, in particular, which explains why she has only been asked to complete a full 90 minutes once this season.

Viv played 94% of all available minutes last season and that has dropped to 77.9% this season and her increased physical workload explains why. There has been slightly more rotation across the board, Arsenal’s 11 most used players this season have played 64% of the minutes available on average, compared to 73% last season. 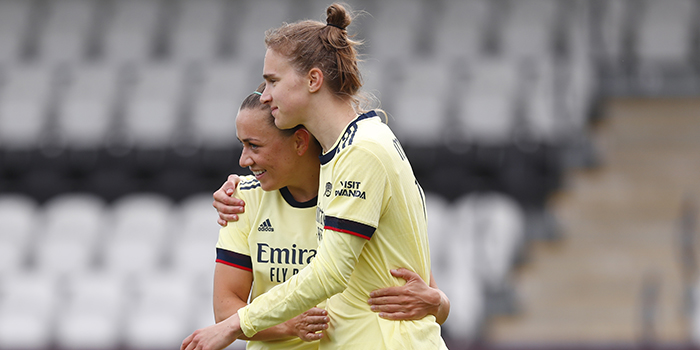 More direct
Arsenal are far more willing to be direct this season, under Montemurro Arsenal deployed a “snake charmer” strategy in possession, moving the ball in the middle third in an attempt to tempt the opposition away from their penalty area before quickly going in behind. Under Eidevall, the ball travels forwards far more swiftly. Look at how the number of long passes per 90 minutes has significantly increased compared to last season.

Again, this plays into the idea of counterpressing. Arsenal’s pass completion percentage averaged at 82.5% last season, unsurprisingly given the number of long passes, that is down to 75% this season but that won’t bother Eidevall or his staff so long as the pressing of the opposition continues when the Gunners do concede possession.

In the aftermath of the 4-0 Champions League qualifying win over Okzhetpes, Jonas suggested that his team needed to vary its goal threat. “We didn’t score from any corners, or wide free-kicks, or from crosses or counter-attacks. We need to be better in those situations.” Arsenal have already scored six goals from setpieces this season, close to last season’s total of eight already.

The number of crosses into the area has increased too. Under Montemurro, Arsenal favoured precision in attack and crossing tends to be inefficient unless you are prepared to do it by stealth or volume. Last season, the team averaged 13.9 crosses into the area per 90 and this season that is up to 19.94. Just look at Tobin Heath’s goal against Hoffenheim as an example.

In the five WSL games at home to Chelsea, Everton and Manchester City and away at Reading and Aston Villa last season, Arsenal averaged 61.2% possession. In the corresponding fixtures this season, that figure is down to 55.2%. Arsenal have 19 goals in these fixtures under Jonas compared to 11 last season. Which brings us onto….

The big games
One of the key issues that emerged over the last two seasons was Arsenal’s miserable record against Chelsea and Manchester City. The Gunners have beaten both opponents at home this season. It is worth pointing out a few caveats. Arsenal caught Chelsea at a good time, when Emma Hayes’ side were physically undercooked from a pre-season disrupted by the Olympics.

Arsenal had already played three competitive games when that game came around thanks to the need to play in the Champions League qualifying rounds. The injury ravaged Manchester City side Arsenal faced in September is not the same team that managed to best them 2-1 on three occasions last season. They played both fixtures at an opportune time.

Game state plays a big role in possession data, Arsenal led Chelsea for the majority of the game in September so it stands to reason that they had less of the ball as the visitors hunted for an equaliser. Whereas the same fixture last season was level for a full 84 minutes. Nevertheless, the numbers show you that Jonas’ team are happier without the ball compared to last season.

Arsenal gave Chelsea a very good game at home last season and were unfortunate not to win. There wasn’t a huge movement in their performance in the same fixture this season, variance was just on their side this time. There was a more significant movement in the City game, where Eidevall’s side happily picked off City’s high defensive line with balls over the top.

Manu Zinsberger
I couldn’t finish the article with a quick mention for the improvement in Manu Zinsberger too. Most have observed an uptick in form for the Austrian this season and the numbers back that up. She has faced a post shot XG of 0.76 this season (so, broadly speaking, you would expect her to concede 0.76 goals per game based on the quality of shots she faces). 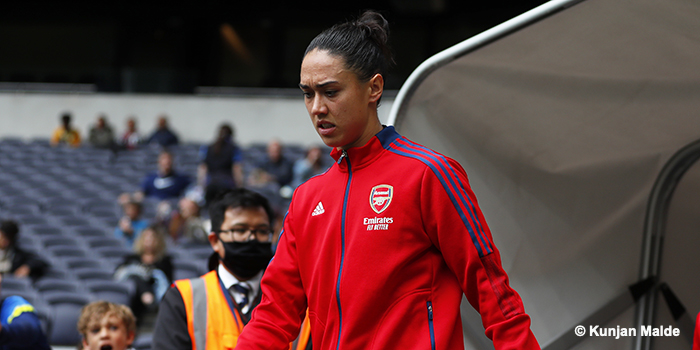 As with all of these data pools, the sample size is still small. Arsenal started their season early and how they manage fatigue later in the campaign, especially given the more physically demanding style, will be the key area to watch. They ran a little hot on their XG in the games against Chelsea and City and might not get that slice of fortune in the return fixtures. However, the changes Eidevall has implemented are obvious to the eye and backed up by the data.

Really enjoying Jonas’ impact. He gives out Klopp vibes to me. The team looks like it has evolved in a really organic way from Joe’s era. Long may this continue.

I think this is a significantly deeper squad than last year; the arrival of some important players looks to me to more than balance out the departures. And that makes the new style more sustainable.

Excellent start to the season both on and off the park. Jonas’ enthusiasm has obviously been picked up by players and supporters. There is so much positive energy about the place. This was epitomised in the 90th minute of the Hoffenheim game when our “veteran” captain chased back almost the length of the pitch to make a goalsaving block. To be expected of Kim if we were hanging on to a slender lead but, no, 4-0 up and home and dry. Inspirational stuff. Could one of our off-field signings be the most productive? Not since I have been following AWFC… Read more »

That’s just how Kim rolls. She does that every game.

Thanks, Tim. Basically, we needed a bit of a change…and we got it.

For me the fact that we were least pressy team in WSL last year, was big red sign and always most obvious area of improvement. We had players for that last season also. It will be interesting to see how long can we overperform on our xG, is it sustainable? Viv is certainly capable of doing it in a long run. Katie/Frida/Jordan are all elite long range shooters, they can absolutely keep that up. Also we have been very good at set-pieces and those goals are indexed very low. As we are seeing set pieces seem to be quite easy… Read more »

That is another big improvement over the “Joe game”. We used to play every corner short and the ball would end up back in our own half. Now only the odd corner is taken short but a majority of the time the ball is tossed in inviting one of the taller girls to stick their head on it!
A corner is meant to be an advantage for the attacking team so it is about time we started taking that advantage!

Agreed. Frida has just got going and Jordan is oh-so-close.
There might be a statistical correction but we are great front runners and as long as injuries don’t derail us, we’ll still be ok because we typically do not drop points to inferior teams.

I just had a look on FBRef and astonished by the fact that Everton striker Anna Anvegård, who was coached by Eidevall at Rosengård, averaged 36.7 pressures per 90 so far this season.

If we dont get injured, Chelsea will get beat again. I heard Emma Hayes talk about the long balls that caught her team out like it was a bad thing.
Well however we play, its true confidence oozes through the team when you win against strong opposition.
I am quietly confident we can get toe to toe with the Big Teams.