By now we know that Arsenal have a big left-sided bias in the way they attack, with Katie McCabe and Steph Catley often combining on the left flank and with one of the central midfield trio (usually Nobbs or Maanum) tucking in to create an overload. It was very apparent against Manchester United on Sunday again.

So much so, that when I asked Jonas Eidevall about the left-sided overload post-match, he quipped, “I can copy my answer from the Everton game, you had the same question then and it’s pretty much the same answer!” In the aftermath of that Everton victory, Eidevall elaborated, “When you watch the game you see that we were pressing Everton to get them to go over to their left and when you do that, you open up spaces on their right and we saw that many times today and when you have the quality of players you are talking about there, yes, you will cause problems for the opponent. We were able to get many two versus one and three versus two situations on that side, especially in the first half.”

Indeed, it was a very similar recipe here against Marc Skinner’s Manchester United. Arsenal often like to use big switches of play to feed McCabe and Catley on the left. Ordinarily these come from Leah Williamson at right centre-half or else from Lia Wälti in the number six position. The first chance of the game, when Beth Mead hits the cross bar, comes from this well-worn move. 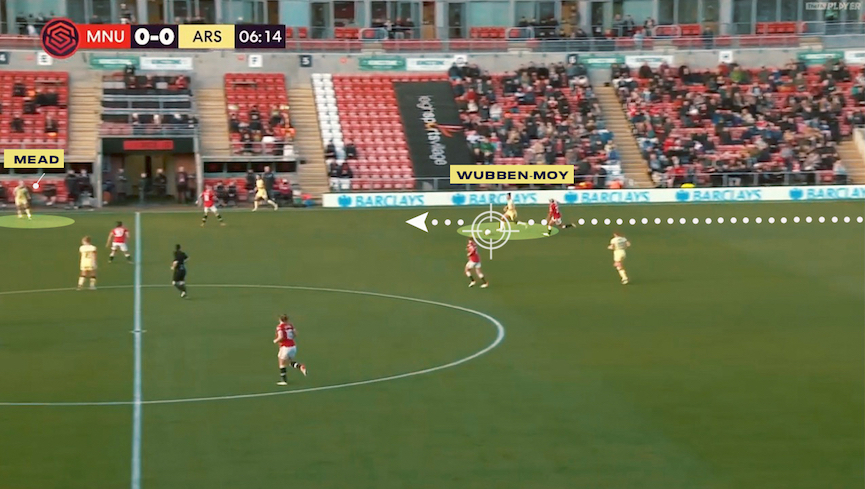 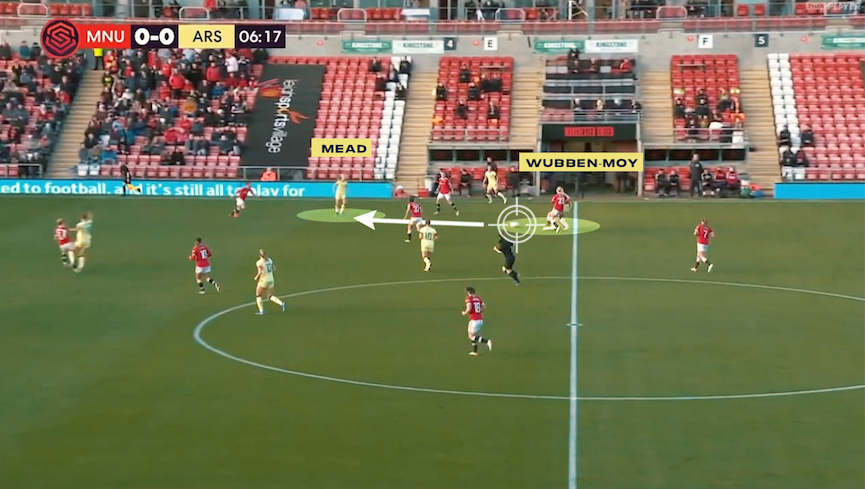 Here, Lotte Wubben-Moy drives the ball out of defence and passes to Mead right over on the right touchline, so all of the United players are bunched up on this side of the field. 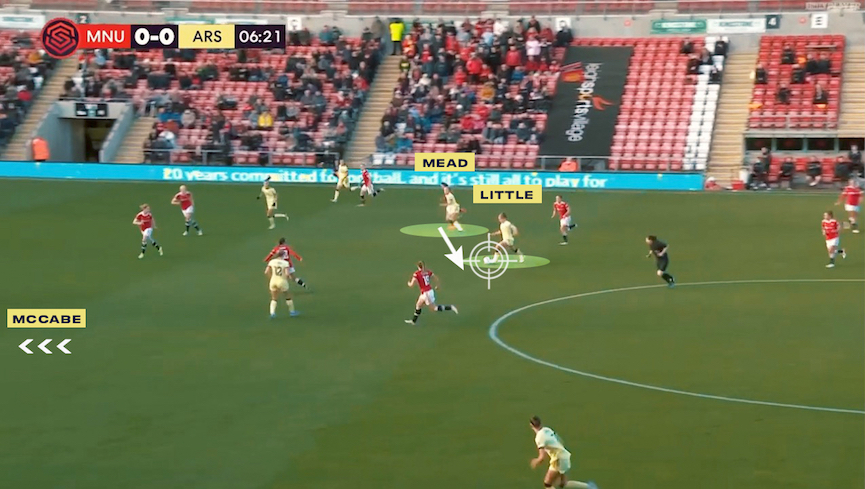 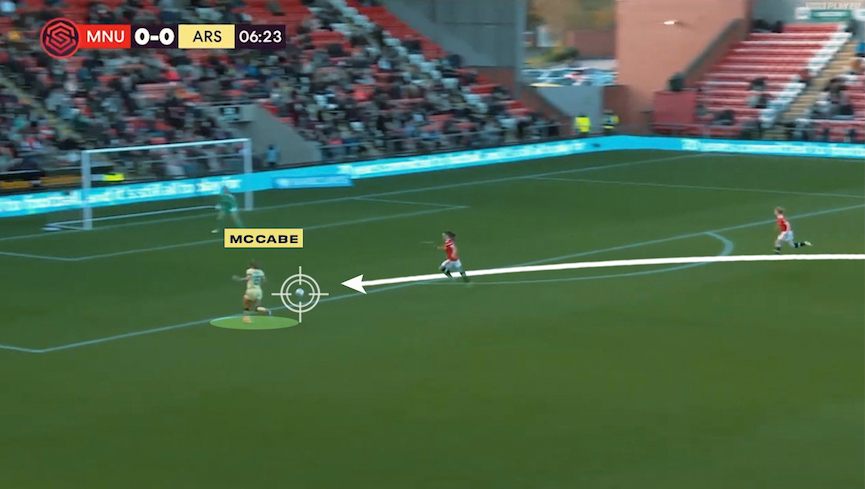 Mead passes in-field to Little, who looks to her left and sees a lot of space to find Katie McCabe. In two passes, Arsenal have gone from Beth Mead having the ball in a crowded area on the right flank, to McCabe getting it inside the United area on the left in space. Her cutback finds Mead, who crashes a shot against the crossbar.

With the very next attack, Arsenal again outnumber United on the left. 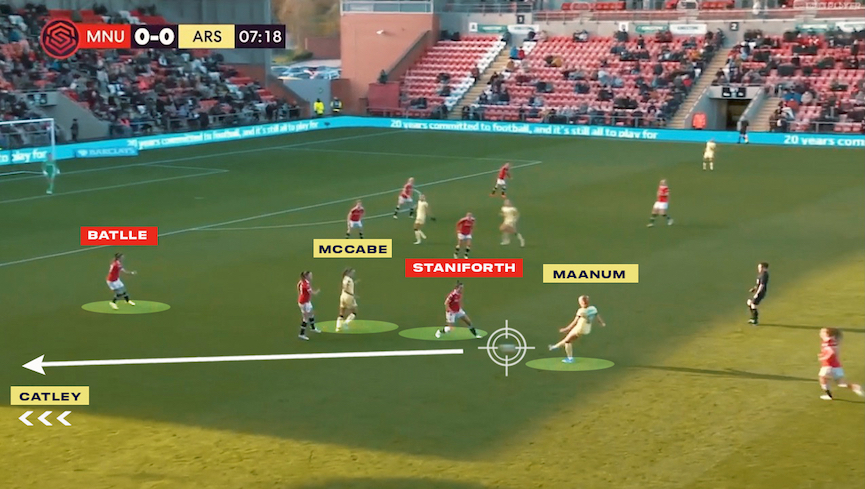 McCabe brings the ball in-field to Frida Maanum. McCabe takes Staniforth with her with her run and that creates space for Steph Catley to run into. You can already see that Battle is panicked by what is developing. She knows she has to sprint to meet Catley and there is already a big space between Batlle and Mannion at centre-half. 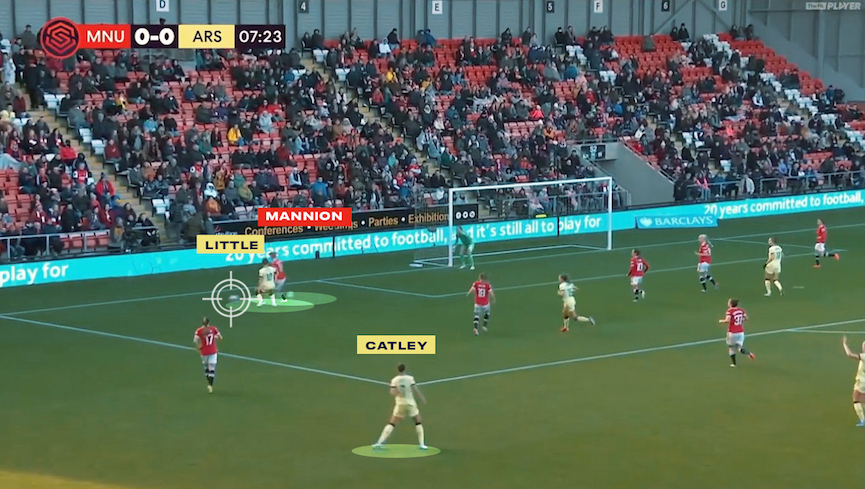 Kim Little runs into that space and Catley tries to find her with an angled ball but there’s just a little too much on it and Mannion comes across to clear for a corner. 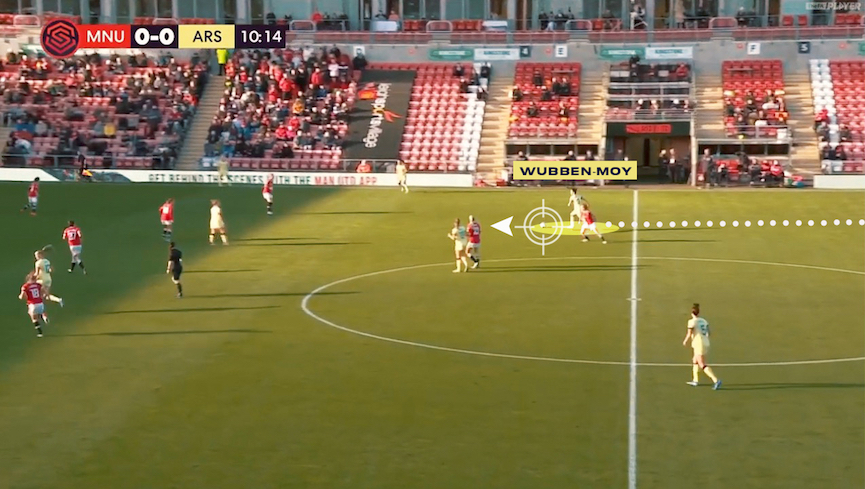 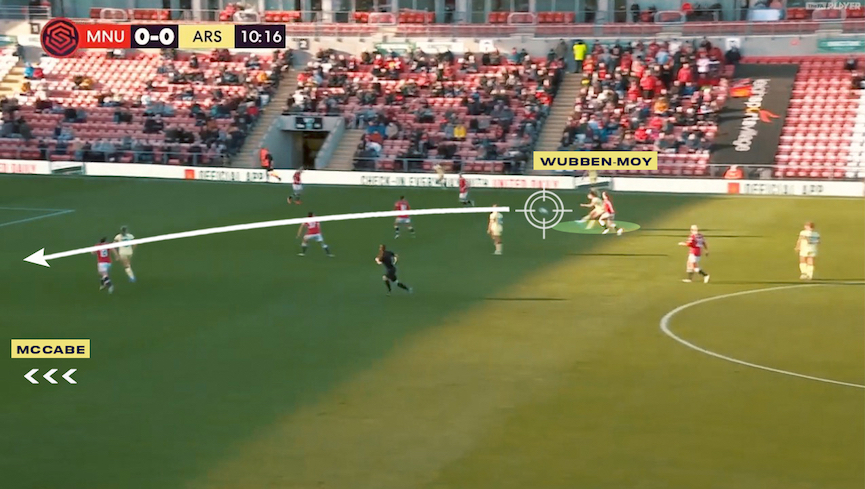 Arsenal’s next attempt at goal has a familiar theme to it. Wubben-Moy drives the ball out of defence from centre-half before hitting a long diagonal to McCabe over on the left. 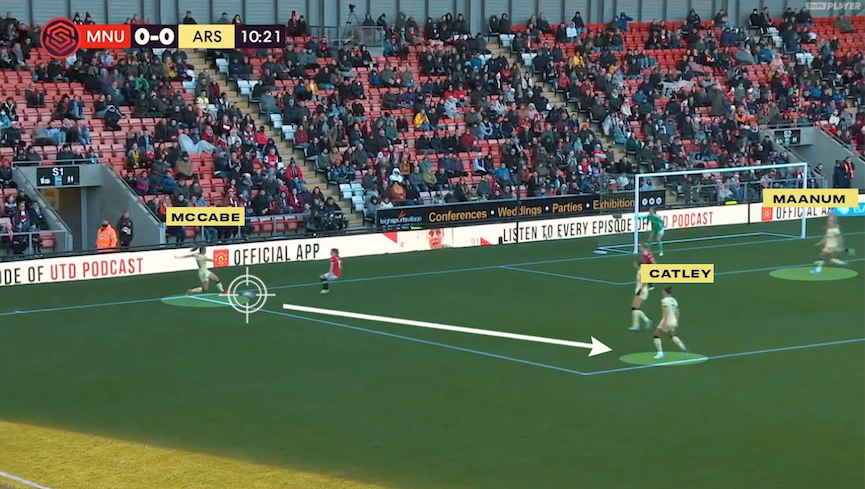 McCabe has Maanum and Catley to choose from, Arsenal have United outnumbered again. The ball is worked to Catley whose cross is blocked. 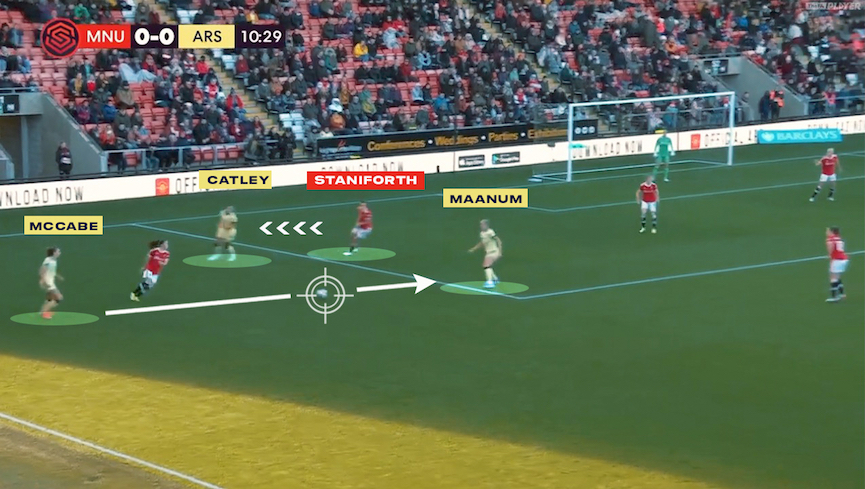 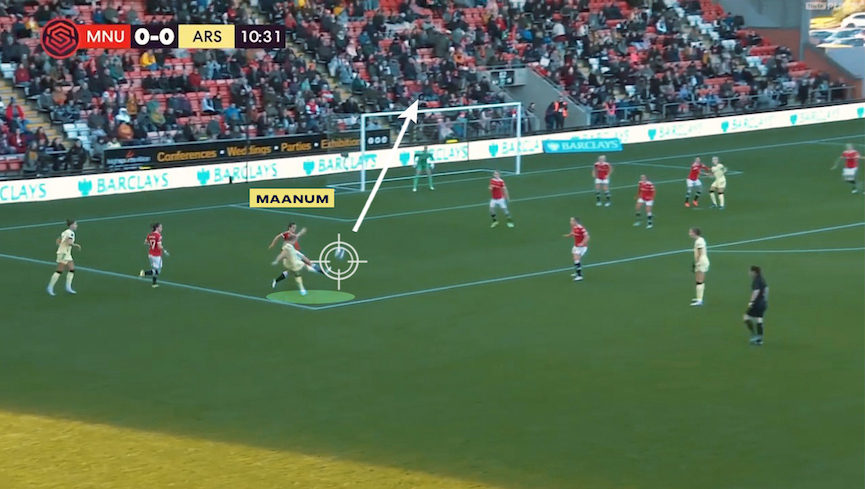 The ball comes back to McCabe and Catley makes an excellent decoy run towards the touchline which Staniforth has to follow. It leaves room for Maanum since Arsenal are still in a 3 on 2 situation and she shoots just over. 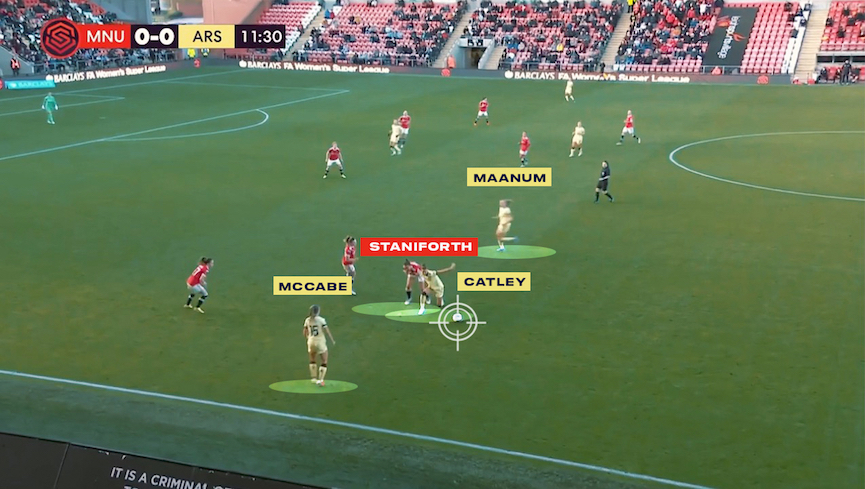 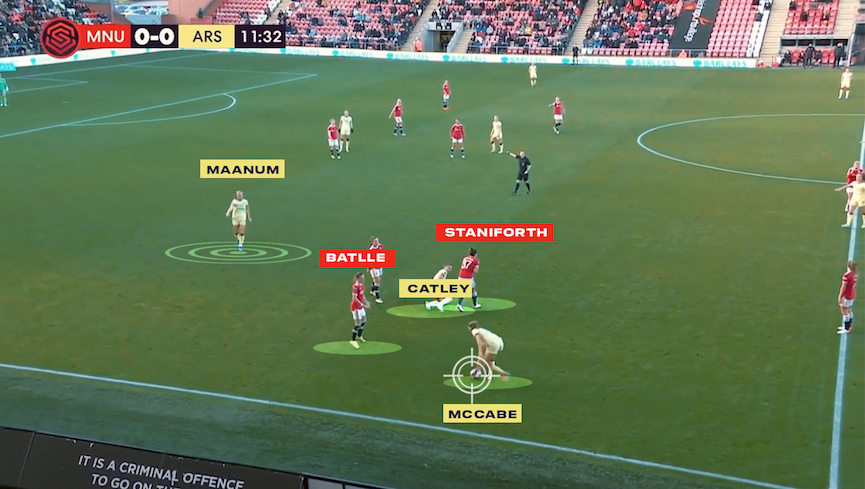 Look again at these stills as United try to get to grips with Catley and McCabe. Staniforth commits a foul which she has to do because of the space Frida Maanum is in behind her. McCabe tries to take a quick free-kick, which Battle encroaches on to block so that Maanum does not have a free-run. 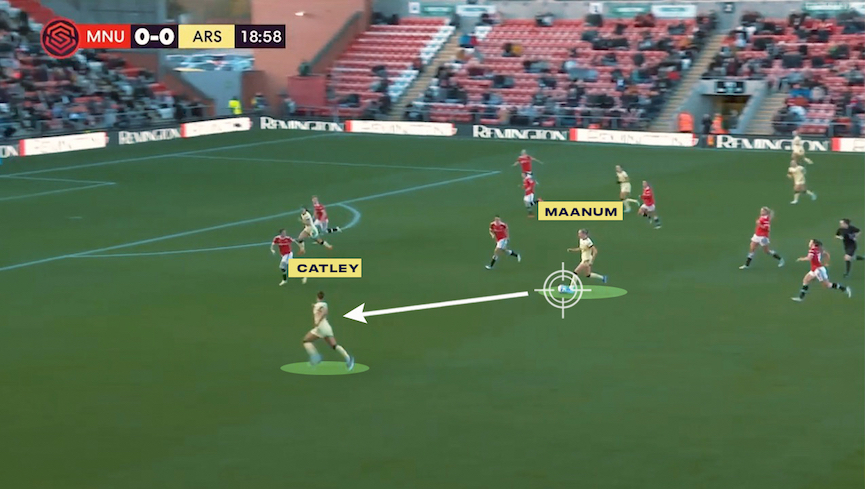 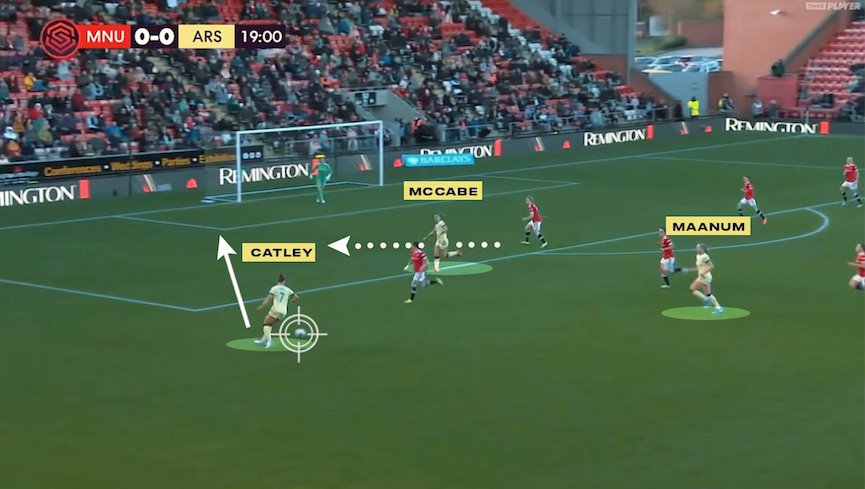 Arsenal work that left-sided triangle once again when Wubben-Moy wins the ball off Russo in the centre circle and Maanum carries the ball to the left-hand side and finds Catley. 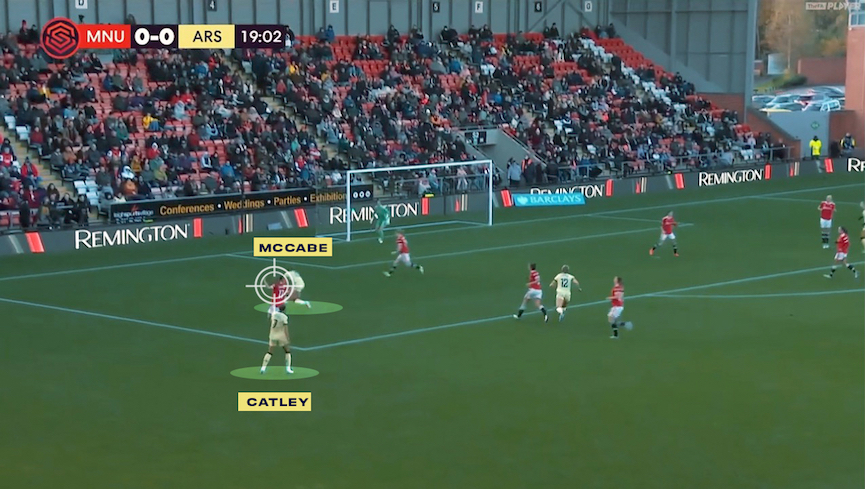 Catley tries to find McCabe in space in the area but her pass is a little off. But again, Arsenal are inches away from creating a clear goal scoring opportunity with that left sided overload. 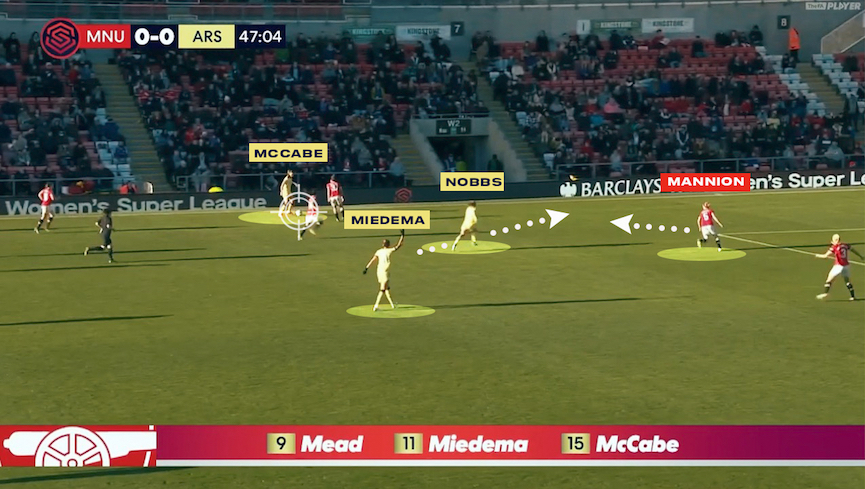 When Vivianne Miedema breaks the deadlock early in the second half, the move starts from the left again for Arsenal. Katie McCabe collects the ball and Jordan Nobbs makes a run into the channel, which Aiofe Mannion has to run across to block. 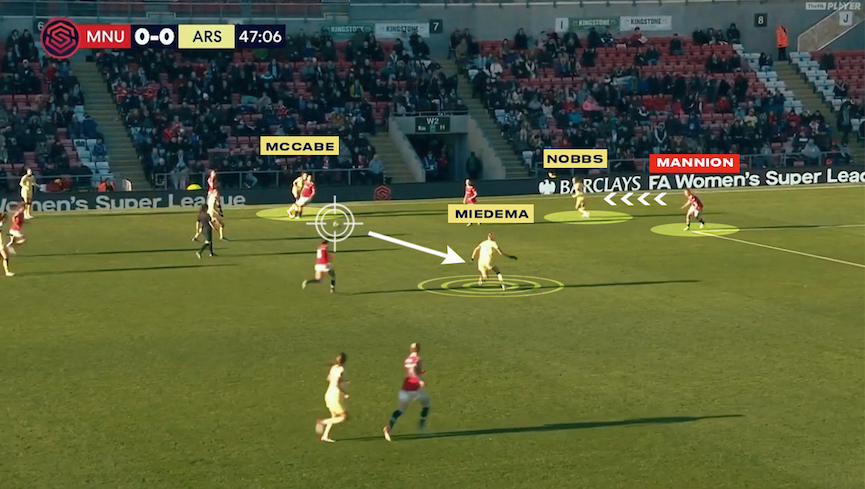 United have obviously talked about Arsenal overloading the left because they have better numbers there to stop Nobbs and McCabe combining. Unfortunately for United, all this has done is take players away from more central spaces and now this means Vivianne Miedema has space and McCabe shovels the ball in-field to her. Mannion has been distracted by Nobbs’ run and is out of position. 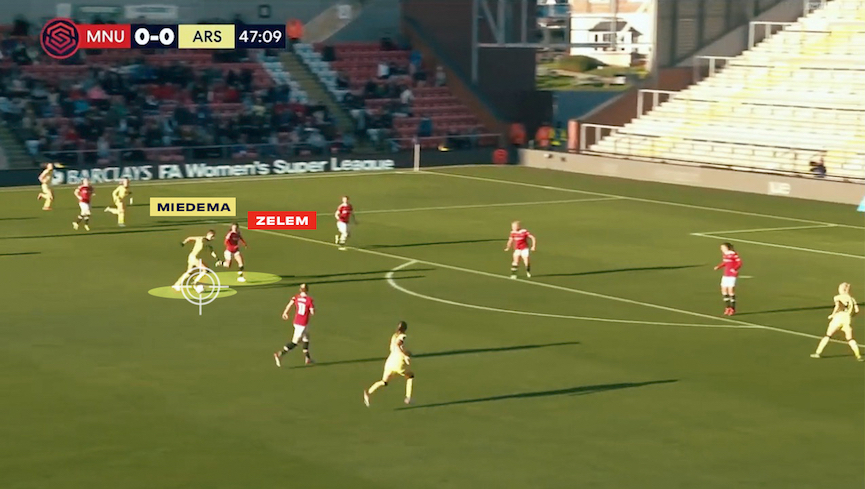 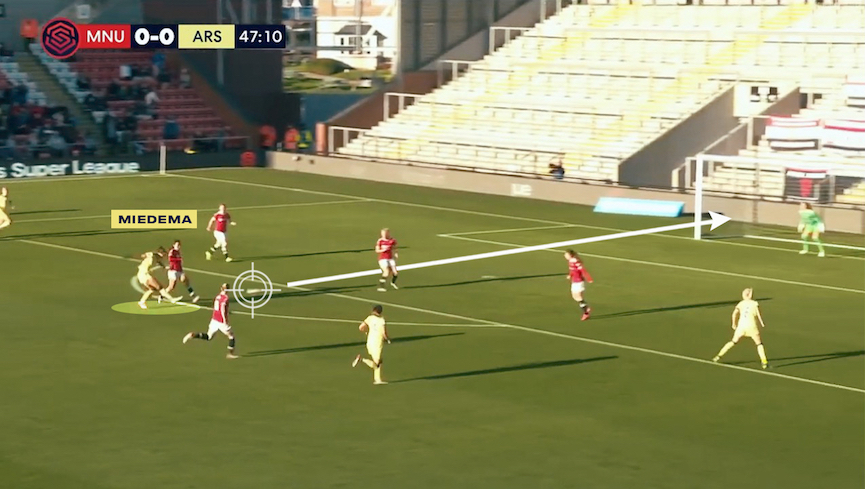 Zelem tries to scuttle across to disrupt Miedema but it’s too late. If you give Miedema one second on the ball, there’s a good chance you’ll watch it sail into your net and that’s what happens here.

It's the perfect start to the second half for @ArsenalWFC 💫

The left-sided overload didn’t happen quite as often in the second half. United did get better numbers over on the side but Arsenal were able to overload the right as a result. Jordan Nobbs stayed very close to Beth Mead and Noelle Maritz on the right and Arsenal created several overloads on that flank with United expecting another barrage on their left in the second half. 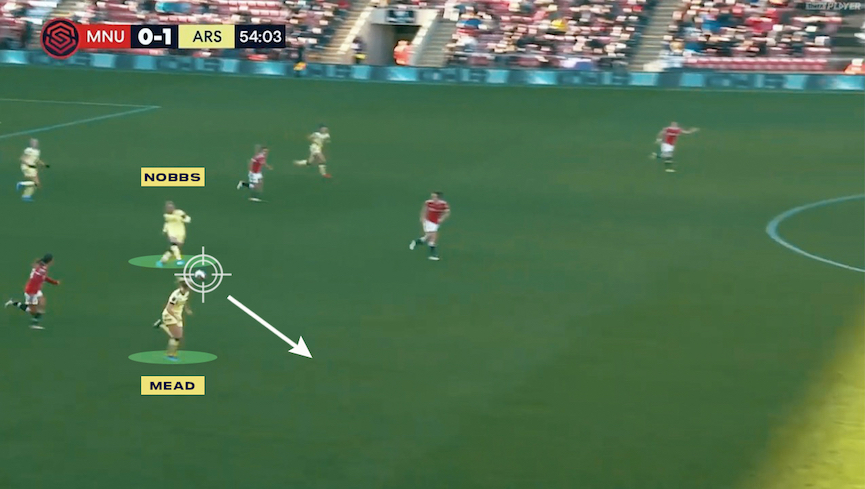 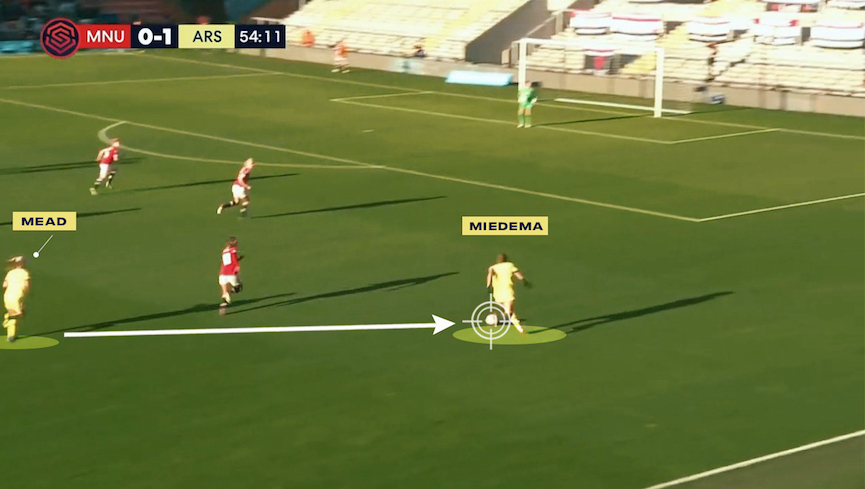 Nobbs blocks Zelem’s pass and finds Mead, who sets Arsenal away on the counter. Miedema has run into the space vacated by Hannah Blundell and sprints towards the area. 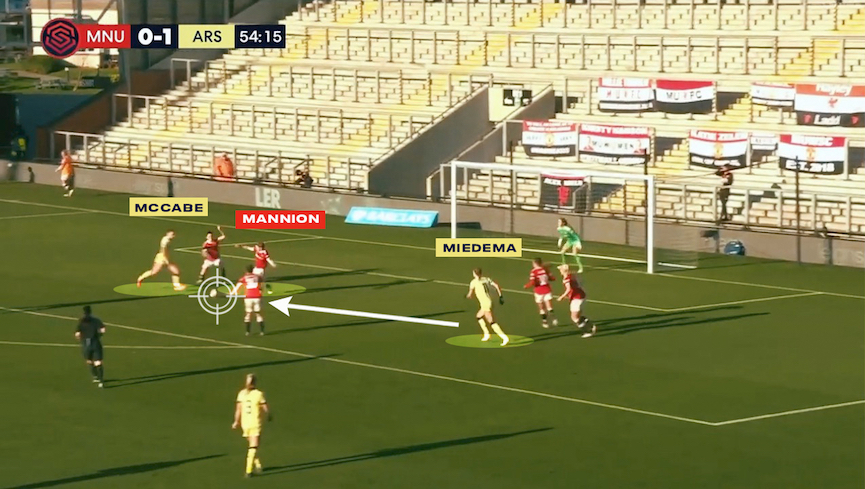 Miedema cuts back to McCabe, who is taken out by Aoife Mannion in the area. McCabe gets up to convert the penalty.

Previous articleLiverpool 4-0 Arsenal: By the numbers
Next articleGarlick talks Arsenal transfers, contracts and why he joined

What an excellent response to the NLD disappointment.

It’s nice to see them using similar play with tweaks without Williamson and it still works nicely.

Really impressed by Walti’s control of the game. She looked on top form

Great analysis! We’ve always seen the left back and the left wing combining well to penetrate the wide channel, but it seems to me there’s an understanding now in the team to have the third player getting involved more (rather than leaving it to the two to penetrate the side and waiting in the center for the cross).