THE LOWDOWN
Arsenal travel to Manchester United on Sunday looking to get back to winning ways after last weekend’s last gasp draw with Tottenham. They were the first points that the Gunners had dropped in the WSL this season, cutting their lead at the top of the table to a single point over Chelsea. United was the scene of perhaps Arsenal’s lowest ebb last season as they fell to a 1-0 defeat.

On that day, a United side coached by Casey Stoney played a high pressing style led by Tobin Heath, now of Arsenal, and Christen Press. It’s a very different United side this season with Press, Heath, Sigsworth, James and Ross all having left, as well as Casey Stoney. Under new coach Marc Skinner, the home side are a different proposition this season but they come into the game on the back of a 2-1 Conti Cup win at home to Manchester City on Wednesday evening.

New: ‘I hope we can co-operate’ Jonas Eidevall calls on National Team coaches to help give players a break https://t.co/uuQJjxq9Nf #arsenal #afc pic.twitter.com/7u9KXG8Xfh

Eidevall’s side have shown signs of wear and tear in recent weeks with injuries of varying degrees to Leah Williamson, Mana Iwabuchi and Tobin Heath. This will be the final game before most of the squad jet off to join their national teams before the FA Cup Final on December 5th and a game against Barcelona at the Emirates on December 9th.

Games at United have been close fought affairs in the last two seasons and this will likely be the case again on Sunday, even if Chelsea were 6-0 winners at Leigh Sports Village earlier in the season. A tough away game off the back of a midweek Champions League tie is exactly the sort of test that will illustrate Arsenal’s title credentials.

TEAM NEWS
Leah Williamson’s hamstring injury keeps her out of this game, Tobin Heath, Mana Iwabuchi and Simone Boye will all have muscle injuries checked before determining whether they will be in the squad. Jen Beattie was spared the last 30 minutes against HB Koge which suggests she will be needed again on Sunday. Malin Gut (ACL) and Viki Schnaderbeck (calf) are still out.

A WORD FROM THE BOSS
I expect it to be a very tough game, one part of that will be how we play out against their pressure and another part will be how we defend- how we can be compact and aggressive against their build-up. We know it’s one of those games that will be defined by the details, so we need to be very thorough in the way that we prepare for it and have a strong game plan and I strongly believe we have that.

LAST TIME OUT
Last November, Arsenal lost 1-0 at Leigh Sports Village due to a late Ella Toone goal on a day when the Gunners were pegged back by the United press. The last time the teams met was back in March at Boreham Wood and Arsenal were 2-0 winners on that day with goals from Jill Roord and Lotte Wubben-Moy.

THE OPPOSITION
Manchester United are in transition with Tobin Heath, Christen Press and Lauren James all departing during the summer and coach Casey Stoney resigning amid dissatisfaction over resources. United have rebuilt over the summer and experienced coach Marc Skinner has moved into the hotseat. The Red Devils have drawn their last three WSL games.

Skinner has been left to rue his team’s killer instinct after losing leads to Spurs and Everton in recent weeks on the back of a 2-2 Manchester derby draw. However, Skinner’s side got back to winning ways by coming from behind to beat beleaguered Manchester City in the Conti Cup on Wednesday evening.

A fine all-round performance on Wednesday night — now let's build on it! 🔴🧱#MUWomen

United left first team regulars Hannah Blundell, Ella Toone, Leah Galton, Katie Zelem and Alessia Russo on the bench on Wednesday with all of them set to start against Arsenal. With City and Everton faltering, United know that the third Champions League qualifying spot is up for grabs. In 2019, Arsenal needed a last minute winner from Danielle van de Donk to win a tough game.

“You can tell I’m energised by what they’ve done. It feels that the players have woken up to what we’re asking them to do with their energy and commitment. The talent is there, the quality is there, and they have this fight and spirit. They’ve shown it before, and we’re gonna continue to keep showing it. I want consistency in that. The message is consistency now,” Marc Skinner said after the victory over City.

PLAYER TO WATCH
With Leah Williamson unavailable, Arsenal are going to have to doctor the way they build play. Williamson’s long passing and diagonal passing are a consistent weapon the Gunners will have to do without for the foreseeable future. Lotte Wubben-Moy and Jen Beattie are good passers but don’t quite have the same range of pass (few do). 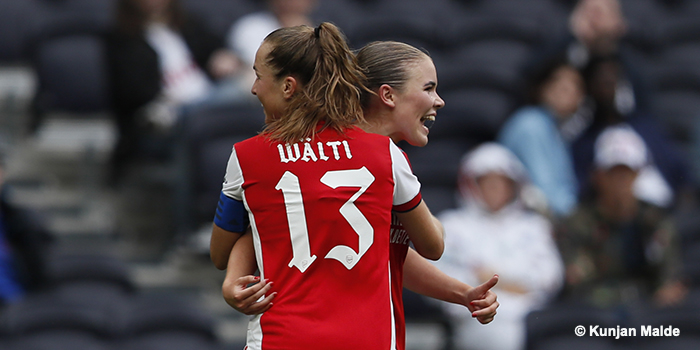 Lia Wälti was even more prominent than usual in Arsenal’s build-up play against Koge on Wednesday evening. The Swiss captain’s range of passing with both feet and her ability to wriggle away from pressure will be crucial for a Williamson-less team. Nicknamed ‘snake hips’ by her teammates, her ability to spread play will become even more crucial in the coming games as she drops deep to collect the ball from Wubben-Moy and Beattie.

HOW TO CATCH THE GAME
The game kicks off at 12.15pm on Sunday at Leigh Sports Village. Tickets are available on the gate for £6 adults and £3 concessions. The game is being screened live on BBC Two in the UK and will be carried by your regional WSL TV rights holder. If you don’t have one, the game will be shown live on the FA Player app, which is free to download.

COMING UP
We’ll have match reaction from Jonas Eidevall on the site on Sunday afternoon as well as a post-match reaction video from me, live from Leigh Sports Village. We’ve got you well covered during the international break too, we have an exclusive interview with Jordan Nobbs on the site on Friday. We will have a November mailbag podcast next week, as well as a special edition of the podcast looking ahead to the Cup Final and the Barcelona match, featuring exclusive interviews with Lotte Wubben-Moy, Steph Catley and Noelle Maritz.

I know it’s been said many times before, but I don’t think it’s said enough… Arseblog is unrivalled in its reporting on all aspects of The Arsenal, from the men’s team, to the women and the youth. We’d hardly know anything outside of the men’s team if it weren’t for this platform. It really is phenomenal and I absolutely love following the women’s team now.