THE LOWDOWN
Arsenal play Chelsea Women in the FA Cup Final at Wembley on Sunday afternoon looking for their 15th FA Cup triumph. The Gunners are by far and away the most successful team in the competition’s history with fourth tier Southampton the second most successful team with seven trophy wins. However, this game will not be judged on which team has the greatest past.

It starts a huge week for Arsenal who also face Barcelona at Emirates Stadium in the Champions League on Thursday evening. Surprisingly, Arsenal have not won a trophy since securing the WSL title in 2018-19 having lost the 2020 Conti Cup Final to Chelsea. For Chelsea, victory would mark a domestic treble as this game is last season’s final.

Arsenal have made strides on last season under new coach Jonas Eidevall and with Arsenal a single point ahead of Emma Hayes’ side at the top of the WSL, there is no doubt that the two best teams in the country will go head-to-head at Wembley. It is a coin toss affair that really could go either way and will likely be decided on small details.

Chelsea will have learned from their 3-2 defeat to Eidevall’s side in September and Arsenal will be less of a surprise package now that their counterpressing style is well established under the Swede. With over 45,000 tickets already sold at Wembley, it is sure to be a white-hot occasion and a chance for Jonas Eidevall to truly launch a new era with silverware. The game is being played on the 100th anniversary of the FA’s ban on women’s football, which would endure for 50 years.

TEAM NEWS
Arsenal will be without Tobin Heath (calf) with the USWNT star still struggling to overcome a muscular issue. Leah Williamson also misses out with a hamstring injury. Viki Schnaderbeck (hamstring) and Malin Gut (ACL) will also be unavailable. However, Jen Beattie, Simone Boye and Caitlin Foord have recovered from knocks that kept them from international duty last week, while Mana Iwabuchi is also back in the squad.

A WORD FROM THE BOSS
I asked Jonas Eidevall whether Arsenal played Chelsea at a good time in September, with the Gunners already in the swing of the season with Champions League qualifiers, while Chelsea had only just begun pre-season training due to the Olympics. “It’s difficult to say when it’s a good time to play a team, it’s easy to say in retrospect when you have the result.

“You could have argued it a different way and said they had the same squad as they had for the Champions League Final, they know the way they play very well. We had a number of additions to or squad and me coming in as a new coach with very limited time, which wasn’t easy. Obviously now, I’ve had more time, the players have had time too, the players have developed and so have I.

“With Arsenal and Chelsea there are two teams who have developed during the season, I’m very excited and looking forward to the game.”

A WORD FROM THE CAPTAIN
“It’s (not having won a trophy since 2019) not something we have spoken about. Naturally, when you are players at this level, you want to win trophies and we’ve not done that in a while, so we are very motivated to do it on Sunday.”

LAST TIME OUT
When the teams met in September, Arsenal were 3-2 winners at Emirates Stadium thanks to goals from Vivianne Miedema and a brace from Beth Mead. Arsenal and Chelsea have met in two previous FA Cup Finals, winning one apiece. In 2016, Danielle Carter’s goal gave Arsenal a 1-0 victory. But in 2018, two goals for Ramona Bachmann and one for Fran Kirby meant Chelsea lifted the trophy with a 3-1 win. Vivianne Miedema scored for Arsenal on that day.

THE OPPOSITION
Chelsea will be boosted by the return to fitness of Danish international Pernille Harder, though it’s likely that she will start on the bench with Canada international Jessie Fleming completing the Kerr and Kirby forward line, which is Chelsea’s most potent weapon. Emma Hayes also has a decision to make in central midfield as to who partners Melanie Leupolz.

Ji So Yun has been one of Chelsea’s most trusted performers over the last seven years but she is more offensive than Welsh skipper Sophie Ingle, who may well start the game in the interests of keeping it tight in the opening exhanges, before unleashing Ji and Harder in the second half. Emma Hayes has moved to a back three this season.

This was largely in response to the Champions League Final defeat to Barcelona last season when they were badly exposed behind their full-backs. Arsenal got some joy out of the back three in September but the Blues are more familiar with the formation now. They also swapped Jess Carter, who endured a tough day at the Emirates, and Mille Bright. Bright has moved to the right of the trio with Carter in the middle and Chelsea look more comfortable with the system now. 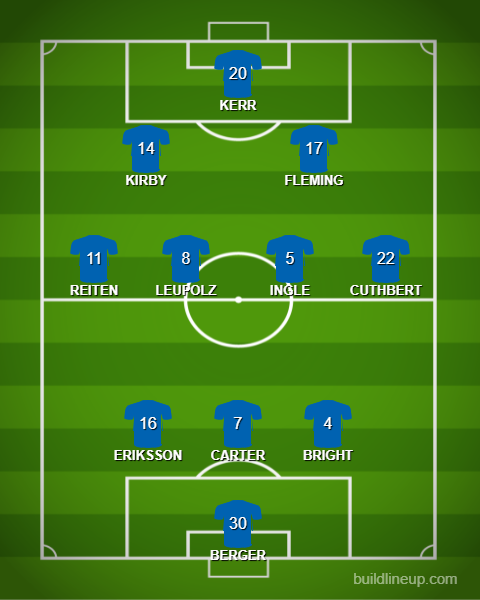 PLAYER TO WATCH
In the victory over Chelsea in September, it was Beth Mead’s brace that proved decisive and set the tone for a very good season for the England international. She also bagged a hat trick for her country on Tuesday night, albeit a feat three other players managed in a 20-0 win over Latvia. Mead was able to expose the gaps down the sides of the Chelsea back three on that day.

Her running but also her pressing will be very important, especially when it comes to pinning Chelsea’s left wing-back Guro Reiten back into her own half. Chelsea like big switches of play from Millie Bright at centre-half and Reiten likes to receive them and Mead and Maritz will need to be switched on, especially as Chelsea like to attract the opposing full-back out to the touchline so Kirby or Fleming can run into the space they vacate. 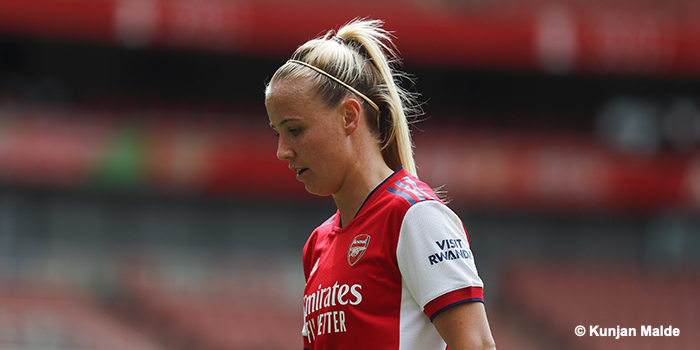 Mead will need to play a solid defensive role but also continue her rich vein of end-product this season, which has seen her bag 14 goals and 23 assists this season across 24 games for club and country. However, none were more impressive or important than her double against Chelsea in September. 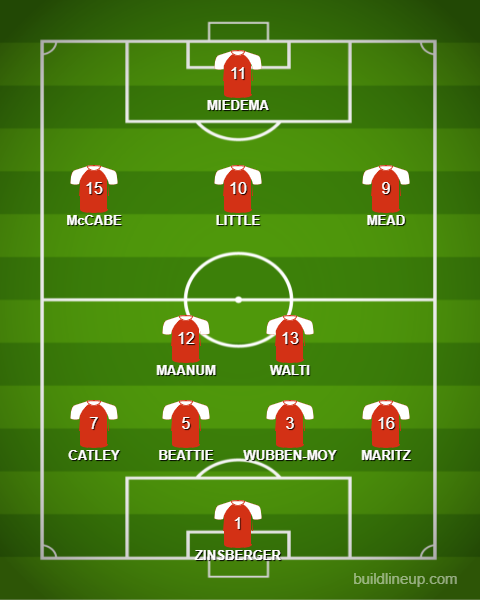 HOW TO CATCH THE GAME
The match kicks off at 2pm at Wembley Stadium on Sunday. It’s being screened live on BBC One and BT Sport in the UK. Please see the graphic below for details of where you can watch it from wherever you are in the world. 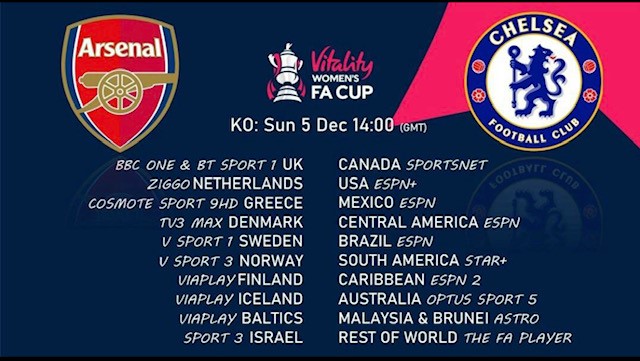 COMING UP
We will have match reaction from Jonas Eidevall on the site on early Sunday evening, we will also have the usual match reaction video from Wembley Stadium too. On Tuesday, we will have an Arsenal Women Arsecast with Tim and Alex Ibaceta chewing over the game but also looking ahead to Thursday’s match against Barcelona. That podcast will feature an exclusive interview with Lotte Wubben-Moy.

Will Montemurro, Maier, Roord and van de Donk receive medals for their contributions in the rounds that actually happened last season?

Yeah will like to know if those players will get their medals since they also played some part. Interesting question Ricky

I’m not sure about Joe but I think all players involved throughout the tournament get medals.

Still gutted I had to cancel this trip. Hopefully more silverware to win later on when things are better in the world again.

We will have the 2 best players on the pitch being Kim & Viv, which may swing the game in our favour…… not forgetting Beth Mead 🙂